Top card and board games for adult Parties! 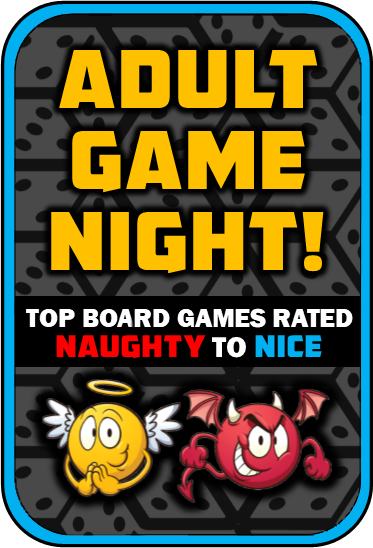 This list of card and board games for adults was compiled with the idea that the success of a party game should be measured more by how much you laugh and connect with other people, than how well you score in the game. Everyone has a different idea of what constitutes a "good time". Some people like their games 'NICE', some people like their games 'NAUGHTY', some just want something chill in the middle.  Below you will find a little something for everyone, so depending on your mood and your crowd you can determine the perfect game to connect, have fun, loosen up, and have a few laughs - whether they are good-natured or dark and devilish is not something we are going to judge. ;)

We have games in each category (classic, goofy, trivia, bonding and more) that rate from GRANDMA APPROVED all the way to BEYOND REDEMPTION.

Have more games or categories you thing I should add? Email me at HappyPartying@gmail.com

TOP CARD & BOARD GAMES FOR ADULT game night
IF YOU WANT TO.... PLAY A CLASSIC!

This is the electronic version of the popular game Taboo where players try and get their teammates to say the topic word without using any of the forbidden words as clues - this new version keeps score for you...continued

In this crazy game of comparisons players are given a description card and they must choose which card they think best matches it - the combinations and comparisons will have you rolling...continued

Cards Against Humanity is Apples to Apples naughty, filthy, foul-mouthed cousin.  If you haven't heard of this game you must have been living under a rock.  #1 NSFW Game in the word....continued

VISITOR SUBMISSIONS FOR THIS CATEGORY INCLUDE:

Rotten Plots - Rotten Plots a delightfully obscene and disturbingly vulgar party game. This is a card game for those who sit around and think, “Wow, that would be a hilarious and ridiculous idea for a movie.” With the Rotten Plots card game, you and your friends can compete to see who can create the most entertaining and humorous movie plot.   - Sam Kuban / Dead Ends Entertainment

TOP CARD & BOARD GAMES FOR ADULT game night
IF YOU WANT TO.... get goofy!

This game is charades in reverse - the group acts out the clue to one person! Teams trying to work together without speaking is the most hysterical part...continue

You never know what's going to happen next when playing Quelf. The only rule is you have to obey the card - but what that card will challenge you to do will have you and your friends rolling.  continued

The orginal version of Watch ya, Mouth had players place dental cheek retractors in their mouth and try and get their team to guess what their saying - make those phrases naughty and you have this NSFW game.... continued

TOP CARD & BOARD GAMES FOR ADULT game night
IF YOU're FEELING.... gangsta!

This game comes with actual toy guns!  players will try to intimidate their opponents into letting them have the largest share of the cash, but they might be shooting blanks...continued

This game is the #1 most-back kickstarter project ever, it also also the most funded project on kickstarter in history!  But how to describe this game.... continue

TOP CARD & BOARD GAMES FOR ADULT game night
IF YOU want to... get illustrated!

Telestrations is the visual version of the classic “telephone game” where you draw what you see, then guess what you saw to reveal hilarious outcomes! No need to be a great artist, it only makes it funnier...continue

This game is absolutely hilarious....and absolutely for adults only.  It's amazing how many different and hilarious ways these images can go together..... continue

TOP CARD & BOARD GAMES FOR ADULT game night
IF YOU WANT TO.... get to know your friends better!

Every player answers a fun question such as “What’s the worst thing to say to a cop after getting pulled over?” Then players try to choose which answer the judge will like best....continue

A topic in chosen, say SWIMSUIT. Then players take turns describing what theirs is like in a fun (but not obvious) way to the guesser, such as "mine gets wet", " mine is tight", or " mine is colorful"....continue

Oh wow, this game could be really dangerous.  Vote on how you think your friends would react in certain uncomfortable situation, and learn what your friends really think of you! This game will have you and your friends rolling....continue

TOP CARD & BOARD GAMES FOR ADULT game night
IF YOU WANT TO.... practice your skills of deception!

A question is given and players must answer the best they can - if they don't the answer they must make one up to try and trick players into thinking it is the right answer...continue

TWO ROOMS AND A BOOM

Stop your President from being blown up! But who is the President? More importantly... Who is the Bomber?! In this social game of hidden roles and deduction, players are divided against each other...continue

When the name Hitler is in the title the game has to go on the wicked list without question.  This game pits the liberals against the facist as you try and decide who is who and practice your own skills of deception to keep others from learning who you are..... continue

TOP CARD & BOARD GAMES FOR ADULT game night
IF YOU're feeling.... brainy!

This is the game for players who have been bursting to scream out the answer even when it's not their turn. Each question has ten clues - the first player to yell out the correct answer wins the round and...continue

Well, since the original is so popular, they created a new, risque, adult version! Same game play--name three things in five seconds--but it's not as easy as it should be. This game cannot be played without laughing...continue

Conspiracy Theory - Tests your knowledge of the world of Internet conspiracies. Answer questions to collect conspiracy cards to win, but be careful of Cover-Ups

Chronology - You decide where historical events falls in your timeline. If you are right, keep the card and your timeline grows.

Submit your favorite card or board game for adult game night?

Tell us about your favorite card or board game for adult game night See what other visitors Recommended!

Are you still here?
Ok, check out this video on the top 10 adult party games... told in an intoxicating British accent. :D 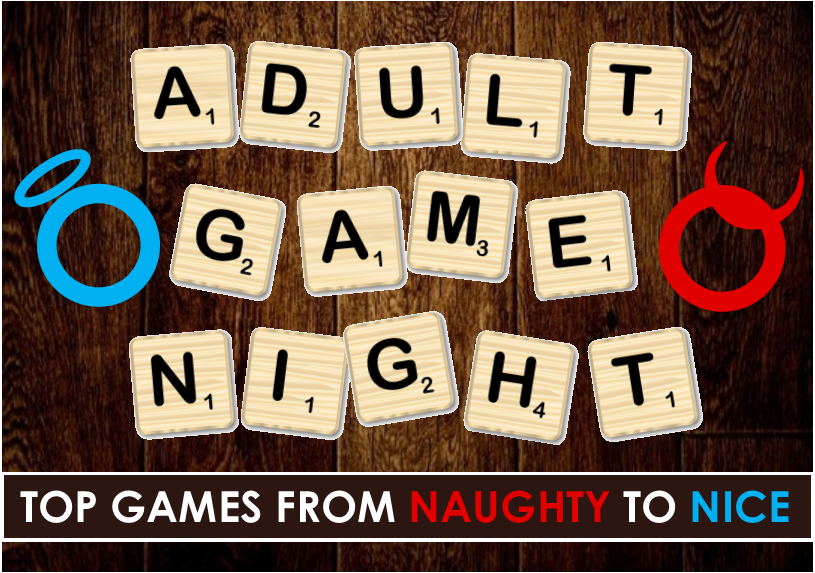