disturbed Friends!
this game should be banned. 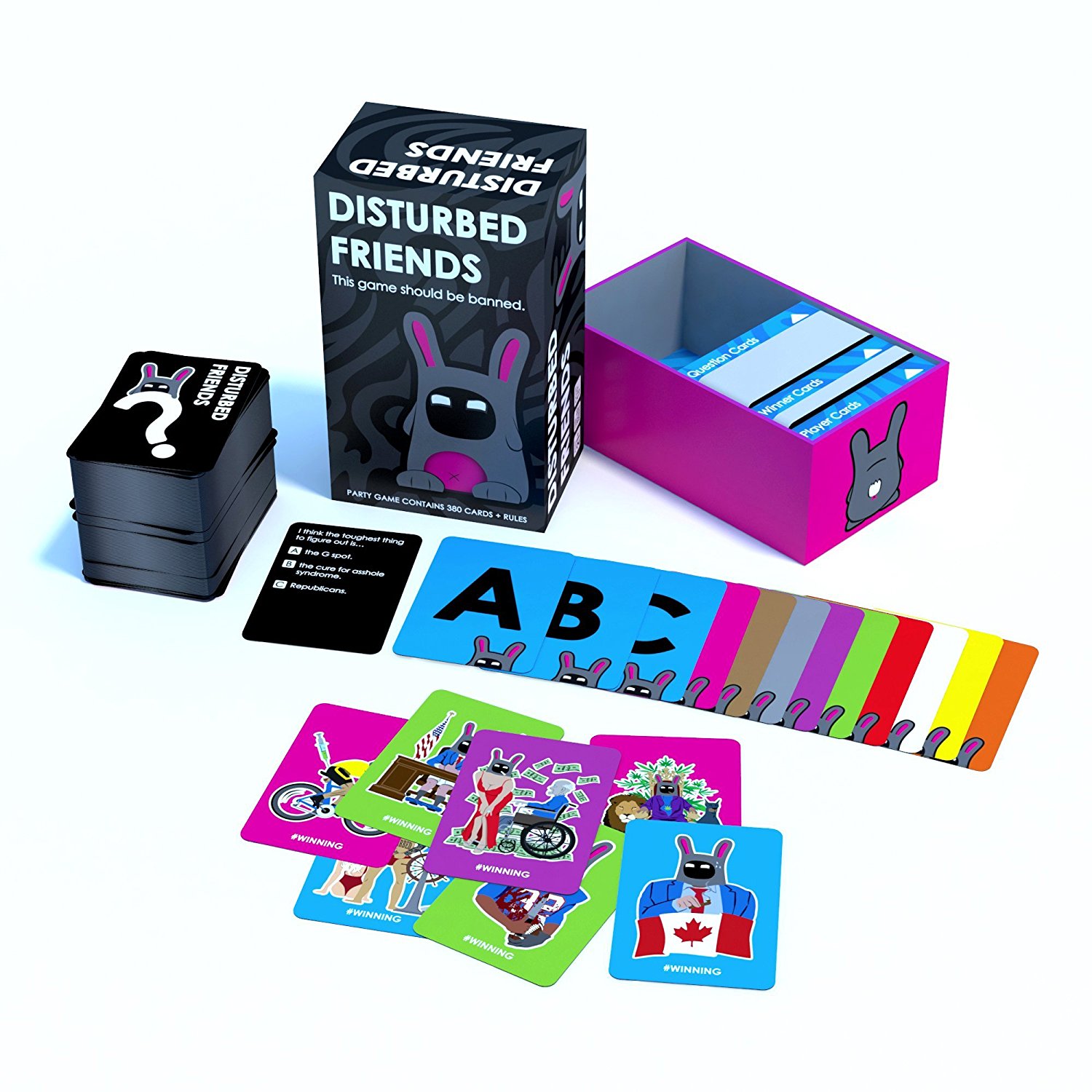 Disturbed Friends is a party game designed to find out how disturbed your friends are, but, more importantly, how disturbed they think you are.

You will be faced with horrible situations, sexual scenarios and unethical debates that may cause you to re-evaluate your friendships.

The game is simple, even a handicapped goat could play. One unlucky player picks up a multiple choice question card and reads it out loud. The other players vote on what answer they think their friend will choose.

Predict how disturbed your friend is and receive a cartoon #WINNING card that mocks the wonderful world we live in.

The first player to get 10 #WINNING cards wins.

Play until you hate yourself.

Warning: This game is not for anyone without a sense of humor. Let me start by saying that my friends and I all have a pretty sick sense of humor. We love cards against humanity and have been playing that on occasion for a few years now. A few months ago we got to play exploding kittens and the urban dictionary card game. I was pretty impressed with the urban dictionary card game and was debating on whether or not to order from Amazon since I was planning a birthday gathering and I saw Disturbed Friends in the suggestions of similar items. After reading the reviews I decided to give it a chance and I'm so glad I did.

This card game has a feel of "would you rather" where one person draws a card and reads a scenario with 3 options for answers. Your friends place one playing card with what they think your answer will be, option "A", "B", or "C" face down and wait for you to provide your answer to see if they got it right. The group of friends I played with is like family to me and we all know each other very well. This led to some yelling and real gut busting laugh out loud moments as we would challenge some of the answers given. What added an extra flair over cards against humanity is the cartoons on the winning cards. Whoever correctly guesses a friends answer gets a card with a cartoon on it that says #winning.

My favorite was a bunny version of Michael Jackson grabbing his crotch while standing in front of a group of little kids. While I could never imagine playing this game with my parents, this is such a great game for a group of friends or coworkers. I was happy to learn you can order expansion packs for this game, but as of now they are not available on Amazon. Just google the game and you can find their website. This is the best $25 I've spent in a long time and is well worth the price, very solid cards, not cheap or flimsy.

I am having a party in a few weeks and wanted to find a fun, adult game that wasn't cards against humanity. After doing a little search I damn across this game and thought it was hilarious. After receiving it I read through all the cards and they were pretty funny and raw. Some of the questions are a little bit on the weird side, but a cast majority of them fun and embarrassing questions and pretty hilarious responses. I'm sure this is gonna be a hit at my next party

OMG... One of the best games so far...I Laughed so hard and soo long everything hurt...and I wasn't even drinking...LOVED IT!!

Overall a good game but if your friends are easily "triggered" you probably shouldn't play it; or do and watch their reactions. Some cards are dumb while others are hilarious. Good game to play with a few close friends because larger crowds tend to exclude some people so this game really does do best when the 4-5 people playing really know how sick and twisted they all are

Open kimono: My box of Disturbed Friends came without some of the playing cards. They were replaced faster than a friendly rabbit can shake its tail. Great customer service! I mean, really really great. Which make sense, they're Canadiens. You know, the most polite people on the Earth. Except for the British.

Do not play this game with your kids, or your parents. Or any other relatives, for that matter. Except maybe that one creepy uncle; he would be good at this game. It is very offensive, and yes, a little disturbing, but a lot of fun. I haven't told my therapist about it yet, I don't want to freak her out.

If you like CoH, you'll probably like this game. NOTE: this game is not played like CoH, there's more voting, which is fun because you can gang up on one player

Check out the rest of the reviews at Amazon.com ( over 900!)

sample questions and scenarios from the game 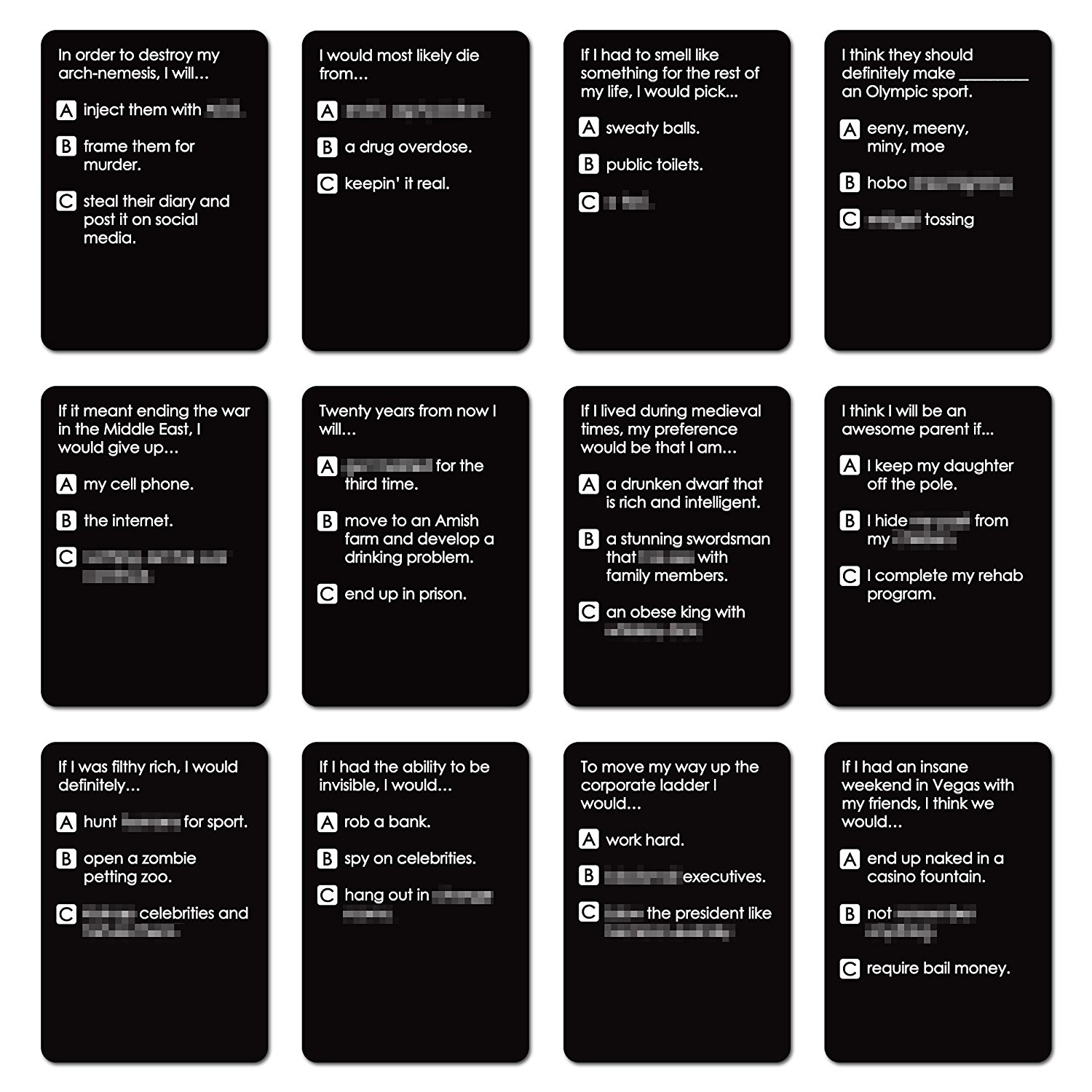 if you can't find disturbed friends at your local department store,  order it now from Amazon.com!