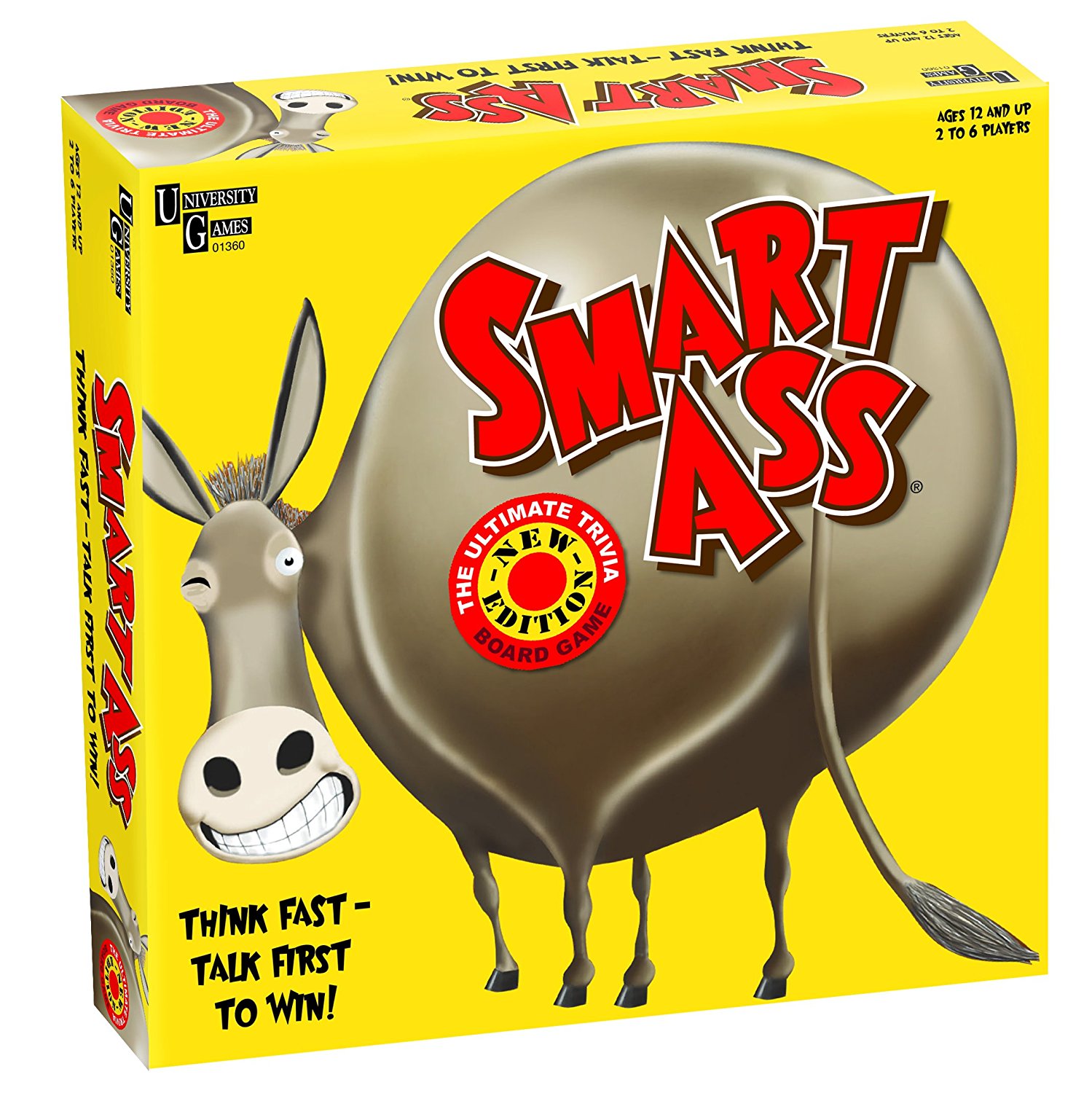 Who's the Smart Ass among your friends and family?

Find out with this outrageous, fast-paced party game that will have the whole gang in hysterics within minutes.

This is the game for players who have been bursting to scream out the answer even when it's not their turn. Each Who, What or Where question has ten clues - the first player to yell out the correct answer wins the round and takes a step closer to being the ultimate 'Smart Ass'.

One of my new favorite games!!! I am so happy that we added this to our collection. It was a great buy and since we bought it on Amazon instead of Walmart or Target it actually has the word ass on it instead of A**. This is one of those incredibly simple games that if you don't have someone who loves board games this is a great way to introduce them. A simple trivia game where whoever knows the answer first just randomly shouts it out and gets the points. It's really no harder than that. Not many rules and not many variations. We generally use this as a light starter game since it goes so quick. I only wish there was more expansions to it!

This game is a lot of fun! I love having adult games to play with my husband after the kids go to bed. The age on this game is 12 plus, because younger kids would not be able to answer the questions. There are who, what and where am I questions - I'm not the best at some of the categories, especially geography, so my husband is usually the winner here. You can play with 2 to 6 players; it would be funner with more than two players. It's a fairly fast going game. The game has 461 question cards, so you're not always repeating questions and making it boring. It's actually a fun way to learn new things. It is simple to play. Each question card has ten clues, you start with one and if no one yells out the answer, then you go on to number two hint and so on until someone yells out the answer. It's really fun. The game should not have any less than 4 stars for sure; it's a fun game for a party or just playing with your family. You actually have to think, but it's not SO serious like trivial pursuit. If you're wondering if you should or should not get the game, you definitely should!

My family loves trivia games- really any type of competition- and this game is one of the funnest we have ever played. To try to keep this review brief, I'll limit it to the reasons I think this game is especially exciting:

- All players are involved in the game at the same time- No waiting for the other team (or individuals if playing that way) to finish their turn. A player (you can switch reader each card) reads the card and all other players yell out answers. This really amps up the competition since it's direct competition instead of taking turns.

- Can be played as individuals or teams- I believe the instructions are for individuals but it's pretty clear how to alter it for teams- just rotate reader between the teams, different player on the team each time. We play boys vs girls.

- Board maneuvers are easy- Anyone roles the color to pick the subject. The reader reads, everyone else yells answers. First correct answer gets to roll the dice and move (for self if individuals, or for the team if teams). There are a couple of special board spots but the instructions for those are easy. The funniest is the "kickass" board spot where the team then has to move backwards as I've seen people keep hitting the same spot and getting stuck.

- Question variety- Some of the questions are hard, but others are pretty easy. The easy ones are actually funner since it then becomes a speed game. This also allows for a variety of ages.

Hope everyone else gets as much fun out of it as we do!

This game is an absolute blast! But don't let the seemingly easy premise stop you from buying. The cards and hints given are harden then they appear. The "What Am I" category is the easiest, and in fact, "Hard Ass" questions aren't all that hard either. But my group of friends came to fear the "Who Am I" category, which is the most difficult. The group would groan every time orange was rolled.

Lots of fun can be had with this game as you race your friends toward the donkey's butt for the title! Gather your trivia-loving adults friends and play the night away.

GET THIS GAME AT YOUR LOCAL DEPARTMENT STORE OR CHECK OUT AMAZON.COM IF YOU WANT TO GET THIS FOR YOUR NEXT GAME NIGHT.