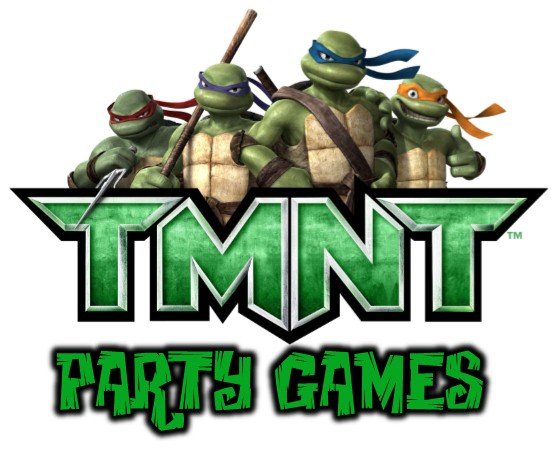 Get ready to party ninja style with these TMNT party games.  Celebrate with your four favorite teenage mutant ninja turtles Donnie, Mikey, Ralphie, and Leo with these fun DIY ideas.

This game is just like the classic party game musical chairs except instead of chair you will use manhole lids.  Create the manhole lids using black or grey poster board.  Cut them into circles and write NYC SEWER on each one.  You can get more creative if you like, some parents have printed out lid images from the internet and pasted them on.  You will need enough lids for all the players minus one.

TO PLAY:  Place all of the lids on a circle on the floor.  Have the children walk in a circle around them while the music is playing.  If you have the TMNT theme song it would be awesome.  Stop the music randomly, at this point each child must rush to stand on a manhole lid (only one child per lid) .  The child that does not get to a lid in time is out.  Now remove one of the lids and continue playing until only one child remains.  They are the winner.

NOTE:  To soften the blow from getting out you can combine this game with the Punch-Out game found below.  When the child gets out they are given a turn to punch and get their consolation prize. 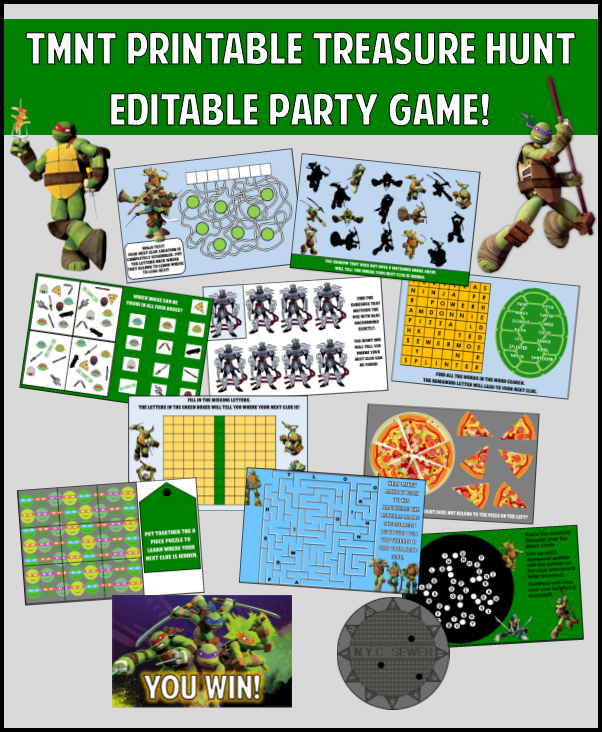 Our exclusive TMNT treasure hunt party game is perfect for ages 6-12.  It features ten clues that each have it's own challenge to solve.

The best part for parents is that this hunt has editable answers so that you can play the hunt ANYWHERE.  We have done the hard part in coming up with creating and engaging clues, all you have to do is fill in where you plan to hide the clues! 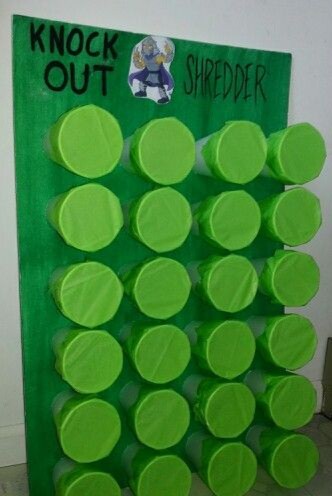 For this game you will need solo cups, a large sturdy piece of cardboard, flat head push pins, tissue paper, and rubber bands.  You will also need small prizes to put in each cup like TMNT stickers or tattoos.

TO MAKE:  Cut holes in the board the circumference of the solo cup when measure around the middle. This way the cups will fit in the holes half way.  Next put the prizes in each cup then cover the opening of each cup with tissue paper, using a rubber band to secure.  Create enough holes so that every player can punch it at least once.  Set upright for the children to play, an adult may have to hold it.

TO PLAY:  Let each child take a turn punching through the tissue paper and retrieving the prize.

Play this game just like “Simon Says”, but instead say Sensei Says.  You can use commands such as “Sensei says Punch”, and “Sensei says kick”, just make sure children are spaced far enough apart that they can’t accidentally punch and kick one another. 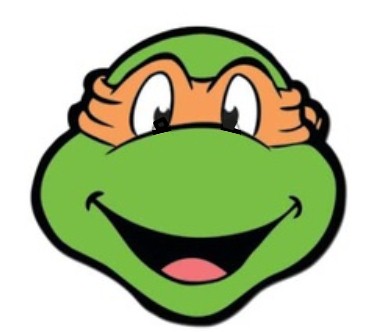 You will need to create a giant head of Michelangelo (with his mouth open) using thick poster board.   Cut out the mouth section.  The idea is that children will try and toss pizza shaped bean bags into his mouth.

You will also need to create three pizza slice bean bags.  To do this cut out six triangles from dough colored fabric. Use markers to decorate three of the triangles to resemble the topping of a pizza slice.  Sew the top pieces to the bottom pieces and fill with dry beans before sewing the ends.

Let each child have three chances to get a slice into Mikey’s mouth.  Give small prizes for victory. 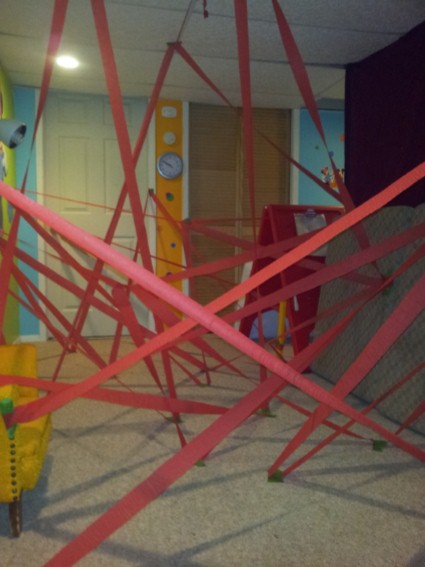 Create a fun “laser” beam field by taping red ribbon at different angles and directions across the floor, walls, and ceilings.  Attach a small bells to each ribbon.  Challenge the children to make it through the lasers and get to the other side without making any of the bells ring.

The pic to the left was submitted by a mom who used red streamer instead on yarn.  It looks to work just as well.

Divide the players into two teams.  Give each team 5 empty pizza boxes.  On the start of go the first player from each team must balance the five pizza boxes on their head (they can use their hands to hold them in place) and race across the playing area to the check point and back to their team.

They then pass them to the next player on their team and that child runs the course.  The first team who completes the race wins.  If pizza boxes are dropped they must stop and pick them up and continue on with the race. 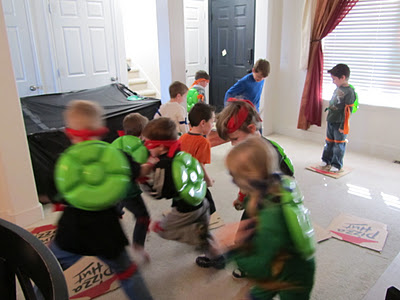 This idea was inspired by an awesome blog of a woman who bought green plastic appetizer trays from the dollar store and turned them into turtle shells for the kids to wear.  She punched a hole on the top corners and elastic through them to create straps for the kids to put on.

I thought it would make a fun game to attach a long streamer to the back of each shell.  The children would chase each other trying to pull off the others streamer while at the same time trying to protect theirs.  The last player with a streamer remaining on their shell wins!

To create toss-able manhole lids, print out this manhole lid image, and tape or glue it it onto the outside bottom part of a foil pie tin.  Set up a bucket and see how many of the ten manhole lids the kids can get into the bucket.

see our Ninja party theme for more game
that might compliment our TMNT theme.