In this messy game children are divided into pairs and presented an ice cube on a paper plate. The ice cube has been colored with food coloring and in the middle of it is a penny. The object of the game is to be the first pair to retrieve the penny by melting (not breaking) their ice cube the fastest. This game gives the children a chance to be creative and come up with a strategy together. You do not have to color the ice cubes, this is done to make the game more visually fun. 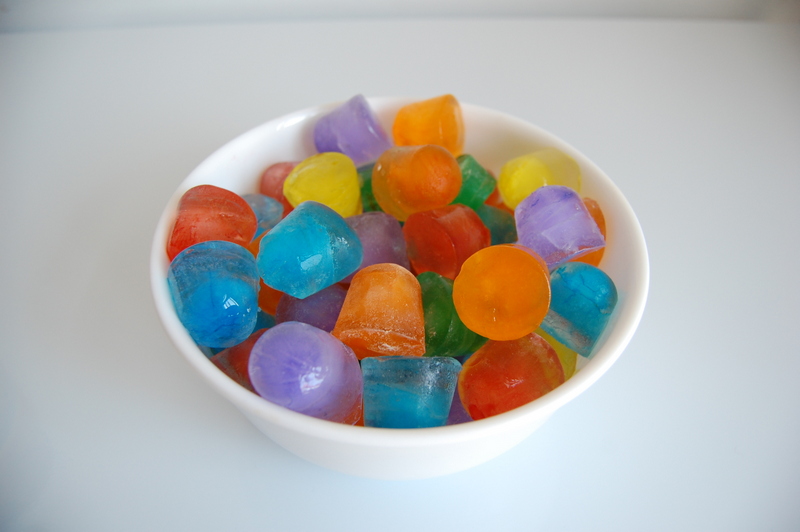 Don’t waste your money on the cheap yellow strips. Instead create your own slip in slide by using a large car tarp (or tarps). Lay it across your yard, hose it down, pour on some baby oil or dish soap to make it more slippery, and let the fun begin. Add some water balloons and/or water guns and the party will be made. WANT TO MAKE IT MESSIER? Instead of water cover it with pudding, jello, or oily spaghetti noodles! Yes it’s messy, but nothing that can’t be rinsed off with the hose plus it is something the kids will NEVER forget.

Have each child wear a white t-shirt that is ok to be colored. Divide all the kids into two to three teams. Each team is given a color and a water gun for each player. The water guns will be filled with water that has been dyed with food coloring to represent that teams color.

The object of the game is that of a paintball game, each player must try and tag other players with their color to make them “out”. For water shots to get another player out it must hit on the back, chest, or stomach. Arms and leg shots will not make another player out, and head shots are not allowed. The last player left in the game represents the winning team.

TO PLAY: Players pass around a spoon and take turns removing a spoonful of flour from the mountain. The player that eventually makes the jelly bean fall must dive into the flour and find and eat the jelly bean using only their mouths! After throw away the flour, create a new flour mountain and play again.

OTHER MESSY GAMES TO PLAY WITH RAW EGGS

Fill a bowl full of boiled eggs and ONE raw egg. Brave participants take turns choosing a cracking an egg on their head until finally the raw one is chosen. Set up a tarp to contain the mess, and let the kids take turns throwing eggs at a fun target. Give each participant a spoon with a raw egg on it. They must hold the spoon while racing each other to the finish line and back without dropping their egg. If an egg is dropped they must go back to the beginning and start again.

Bowl of Cereal Fill a kiddie pool full of water, powdered milk, and generic frosted flakes. Have the children crawl through it on their hands and knees without spilling a drop.

Feet of Steel Fill six buckets with water and ice and set them up in two rows of three. To pass through this obstacle the children must race through the buckets by placing one foot into each bucket as they pass it.

Shave the Balloon To pass this obstacle the children must slather shaving cream onto a balloon and make three swipes with the razor - without popping it. Draw a face on the balloons before hand to add a little extra fun.

Balloon Pop In this obstacle course challenge the goal is to bust the water balloon by sitting on it.

Spaghetti Pool Fill a kiddie pool with cooked spaghetti noodles and oil. To pass this obstacle course challenge the child must find at least one meatball (bouncy ball) hidden underneath the spaghetti to move on.

Pudding Slide To finish the player must pull themselves across a tarp on their bellies. The catch is The tarp is covered with CHOCOLATE PUDDING

Ok, this isn’t a game, but it is a fun, messy, but oh so yummy activity that will be a blast at any party. Create an Ice cream Sundae Bar and let the children make their own sundaes or banana splits. Provide tons of flavors and topping choices and let the kids have at it. You could even give out prizes for most original, creative, tasty, colorful, or even gross ice cream sundaes.

You Might Want to Check Out my Page On: