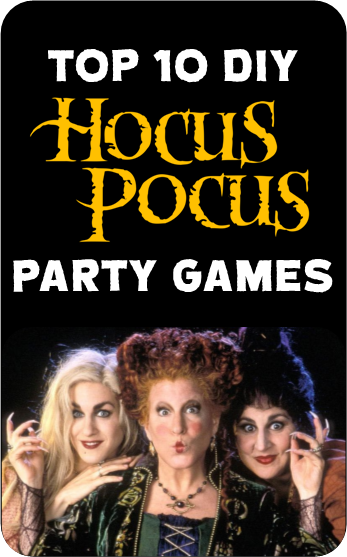 You're in for a devil of a time with these amazing party games! These DIY games will have all your guest in a magical trance of fun and joy!

A Hocus pocus spin on the classic pin the tail on the donkey.The blindfolded guest is spun around until he or she is disoriented. The guest walks around and tries to pin the tail on Thackery. The player who pins their tail closest to the target, the rear of thackery, wins. We sell a perfect printable here that will make this game even easier and stress free to put together.

This game is strictly for our 21 plus hocus pocus fans. For this you are going to watch the movie and make a guideline of rules on when to drink. Some of the guidelines can be drink Every time Thackery Binx “dies”,take a shot when someone says “dude!”, and take a shot when a spell is cast. You can use this guideline, you can add some, make all your own or purchase our party printable here with a bunch of fun rules.

You probably have heard of or played ring toss this is a witchy twist on that traditional carnival game. For this game you will need 6 witch hats and 6 glow in the dark necklaces. Players/teams alternate turns, throwing one ring at a time until all rings have been thrown. Score 5 points for each ringer and 3 points for any ring touching the hat. The team/player with the most points at the ends wins!

This is a game to test how well you really know the 3 witches from hocus pocus. First things first you are gonna need a judge/host. This person will receive a list of physical characteristics, personality traits, and quotes from the witches and which one it corresponds with. The host will then test your party guest knowledge on such facts. For this your host will say a fact and the first person to correctly call out who said it gets a point. I suggest one guess per person per fact and also a system for guesses like who raises their hand first or who rings a bell first. You are gonna go through all the quotes and whoever gets the most points wins.

This game is gonna be super different and fun. For this game you will need various brown paper bags with different things inside it can literally be anything from a rotten banana to old gym shoes. You are going to label each bag with a number and line up your guest. The guest will need to have a blind fold on and get a chance to smell in each bag and write down their guess on a piece of paper with the corresponding bag number. After everyone has smelled in each bag reveal what's inside each one and the person who smelled the most right wins.

This party game is a relay race for it. You will need two brooms, a start line, a finish line, and an even amount of players. To play the game you will need to create two even lines as the start line. Each line will have a broomstick each person will hold the broom in their legs with no hands then go to the finish line and return back to their line with the broom and pass it off to the next person in line and they will repeat until everyone in the line goes. The first line to go through all their people without dropping their broom wins.

This game can be played two ways. You can play as don’t cackle where you have one person trying to make a group of people laugh. Or you can play where you have a judge. Then each participant one at a time will do their best cackle. The judge will decide who has the witchest cackle and that’s your winner.

This is a great way to let all of your party guests let their individuality shine. Set up a table with lots of options such as glitter, food coloring, beads, and the base ingredients for your slime of choice, or you can even buy our fun printable potions recipe here and print out one for all of your party guests. Not only will this be a fun activity for lots of ages it's a great party favor everyone can take home.