Whether you are planning a football themed party or a Super bowl blowout, you may need some help. Establishing what type of party you want to throw is important. That is why we have developed a selection of printables to give aid to your cause. Besides great finger foods and a rowdy crowd of guests you will need to keep the masses entertained. That is why we have a set of free game ideas and activities for you to enjoy, I mean you can’t be free fun right? So take a look and start prepping for your Football or Super bowl party blowout!! 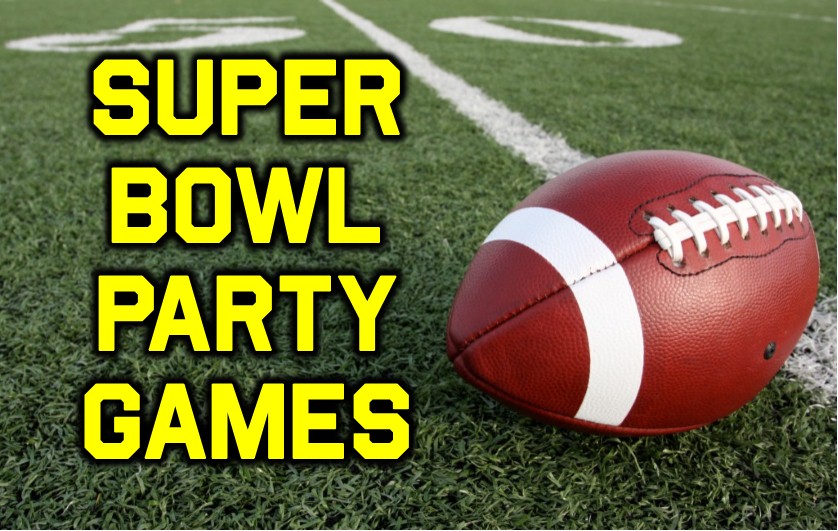 Who doesn’t like chicken wings, eating, and football? Now you can bring those things together to have your guests competing to see who the champion eater is. Have a large amount of chicken wings ready to it and on a large platter. You will need to set a timer to one minute.

Have the competing guests gather around the chicken wings. Make sure each competitor has their own bowl to toss their bones after eating.

When the clock begins the eaters must eat all the meat off of the bone and move onto the next piece. When time is up they must count their bones. The person with the most bones wins the chicken challenge and gets a small prize. If you want to make the challenge harder you can do hot and spicy wings.

You will need black and white balloons, scraps of paper, a pen, and a large garbage bags. On half of the papers you will write penalty and follow it up with a penalty. Some good examples for penalties are: Penalty- pick up after the party, Personal Foul- gather all of the balloon pieces into the trash. The other half of the papers should say Score. Some good examples for scores are: Field goal-you get extra cake, Touchdown- you get to pick a prize from the surprise bowl.

Fold up the papers and put one inside of each balloon and then inflate the balloons with air and tie shut. Place all of the balloons in the large garbage bags. Depending on how many bags you have, you can stop the party periodically by blowing a whistle like a referee and empty one of the bags out. The guests will pop a balloon to retrieve the paper inside and find out if they have a penalty or score. They will keep their papers and follow through with what it says. This is a fun way to keep everyone involved and anticipating a whistle blow.

All you will need for this game is scrap paper, pens, and small prizes to hand out. Before the game begins you will give each of your guests a piece of paper and a pen. They will write down 3 to 5 predictions each for the game. Some examples are: there will be a touchdown by #15 on the X team before half time, the Y team will get three penalties by the end of the game, or #27 from the Y team will tackle #42 from the X team.

Take the pens away when the game begins. If someone gets a correct prediction they will shout it out and when it is verified they will receive a small prize. This continues until the end of the game and gives everyone a chance at winning.

You will need a football helmet and several prizes placed inside the helmet. Choose items that are suitable for the age group at the party. Good ideas for the younger players would be stickers, erasers, glow sticks, assorted stickers, and bouncing balls. Have music available with pausing capabilities to play during the game.

Have all of the guests split into groups of three or more, depending on size. Give each group five minutes to come up with a half time show of their own. You can have a box of assorted items that they can use as props to give their show a bit of flavor. Once time is up, have a group come up and perform their show. Once all of the groups have performed you will have everyone take a vote on which group did the best half time show and they win a prize.

This is a great game to play during the Super bowl or while watching a football game. Start with an empty solo cup and hand it to a player. They must put a dollar in it or a quarter depending on the crowd. They will then name a football play. For example they could say first down, field goal, or touchdown. They will then pass it to the next person and they will put a dollar in.

Most football fans love the sport because of the level of competition. So bring out the competitor in your guest’s with this game. You will need an empty trash can or large container, several bean bags and a stopwatch. You will need to announce someone as the runner for the first round. They will run the bags back to the person throwing when they are running low on bean bags. The person who will be tossing the bags will have thirty seconds to try to get as many bags into the container as possible.  After their turn, they will become the new runner for the next player. This continues until everyone has had a try and the person with the most points wins the game.