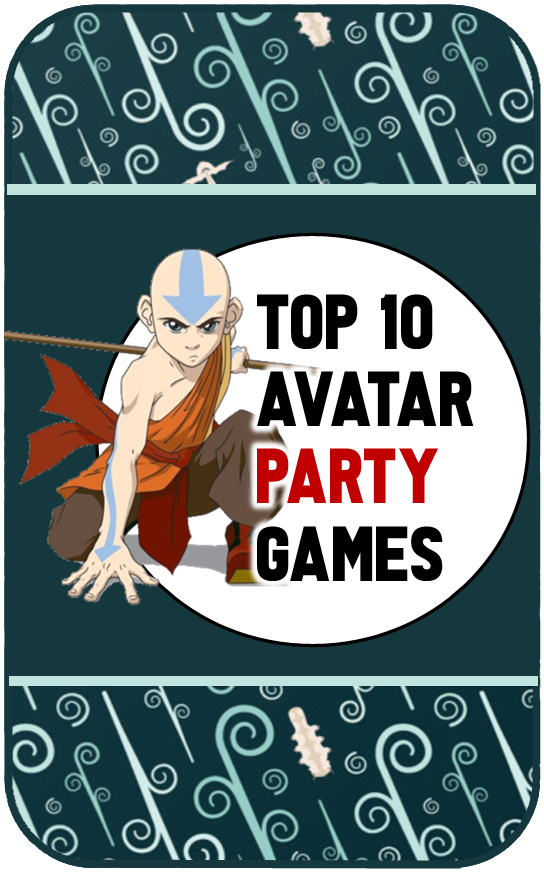 Let's throw an Avatar the Last Airbender party!!  For this theme party guests are going to train in each of the four elements completing an avatar party game for air, water, earth, and fire.  Some elements have more than one avatar party game idea, just choose your favorite from each section. After the training players will be divided into teams and complete our Avatar the last airbender scavenger hunt / obstacle course!  We have also included some games for Legend of Korra fans! 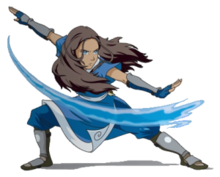 Water Toss: Players are divided into pairs and each team of two is given a water balloon.  They start facing each other standing about a foot apart.  One player tosses their balloon to their partner who must catch it without breaking it - After they both take a step back.  If the water balloon bust they can start over with a new one, but must start again at one foot apart.  At the end of 10 minutes whichever team has made the longest toss without busting wins!

Balancing Act: You'll need a sheet or a tarp for this training game. Assign each kid a different color and have water balloons ready in all of those colors. Have the kids  grab onto the sides of the sheet/tarp the way we did in gym class with the parachute games.  Now place all the water balloons in the center.  The kids attempt to bounce the water balloons on the sheet.  The players whose color matches the last balloon wins.  You can also do this tournement style by having players battle of six at a time  (two for each long side, and one on each end).

Cups Relay Race: Separate into two or three teams. Have each team sit down on the ground in a straight line, facing forward. At both ends of each of the lines place a big. bucket. The one at the front of the line should be filled with water, the one at the back empty. Give each player a plastic cup. It's time to start the race!

When the kids pull back on the balloon and release, a shot of air will come out  through the bottle neck end. Give each child an airblaster and let them decorate them with stickers.  The kids can practice their airbending by using them on bubbles (which they can pop, split, or control depending)  or you can set up obstacles for them to knock down like in the video. 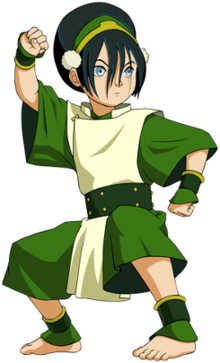 Sensory Dig: For this game you will need a kiddie pool full of dirt or sand along with 20- 50 plastic army men. Bury the army men in the dirt and challenge players to rescue them all. If you want to make it a contest you can make it a relay race by dividing players into two teams and having one player from each team race to dig up one army man and then run back to their team tagging the next play.  That player does the same until all players have rescued one man. The first team finsihed wins.

Muddy Toes:  This game also needs a kiddie pool.  It also needs dirt/sand water,  a large amount of smooth stones rocks, and stools/chairs for the players to sit in.  To play the game players take off their socks and shoes and sit in the chair placing their bare feet in the mud ( yes this game is MESSY so have the hose ready to rinse feet when finished) .  Players are given one minute to collect as many rocks as they can using only their toes.  They cannot touch the mud with their hands.  Have a bowl ready where players can drop their rocks.  The player who collects the most wins.

Boulder Rolling Obstacle Course:  For this game you will need to create a boulder by paper macheing a large beach ball and painting it like a boulder (grey /black).  Create an obstacle course that players can push / pull / throw their boulder through.  Time each player to see who makes it through the fastest.  Obstacle can include: 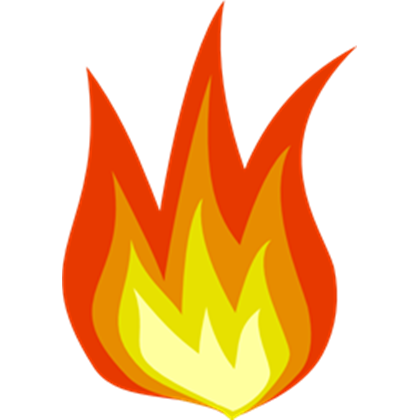 Dodge Fire Ball: For this game you will need red plastic ball (for added effect paint orange flames on it)  - these are your fireballs.  Place them in the middle of the playing area. The area needs to be outside and large enough for players to run around.  Divide players into two teams and have them stand on the far opposite sides of the playing area.  On the start of go players run toward the ball and pick them up and throw them at each other.  If a player gets hit (below the neck) they are out - but if they catch the fire ball then the player who threw it at them are out and one player from their side gets to come back in. COntinue playing until one team has eliminted the other.

Fireball Knockdown:  Again use red plastic balls to represent fireballs.  Set up plastic cup pyramids and challenge players to knock down all the cups using as few fireball throws as possible. 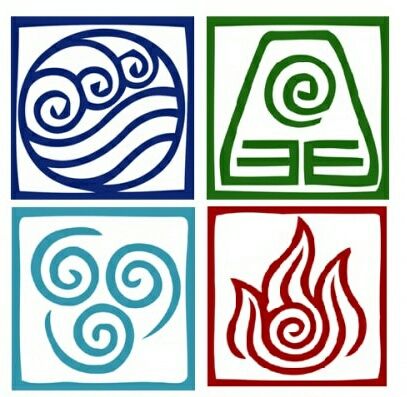 Place a printed out avatar element sign in each of four corners or spaces.  One player covers their eyes and counts to 10.  The other players run and stand at one of the four elements.  When the counter is done they keep their eyes closed and call out an element, after which they can open their eyes.  Any players who chose that element are out until the next round.  Continue playing until there is only one player left - they are the next caller. 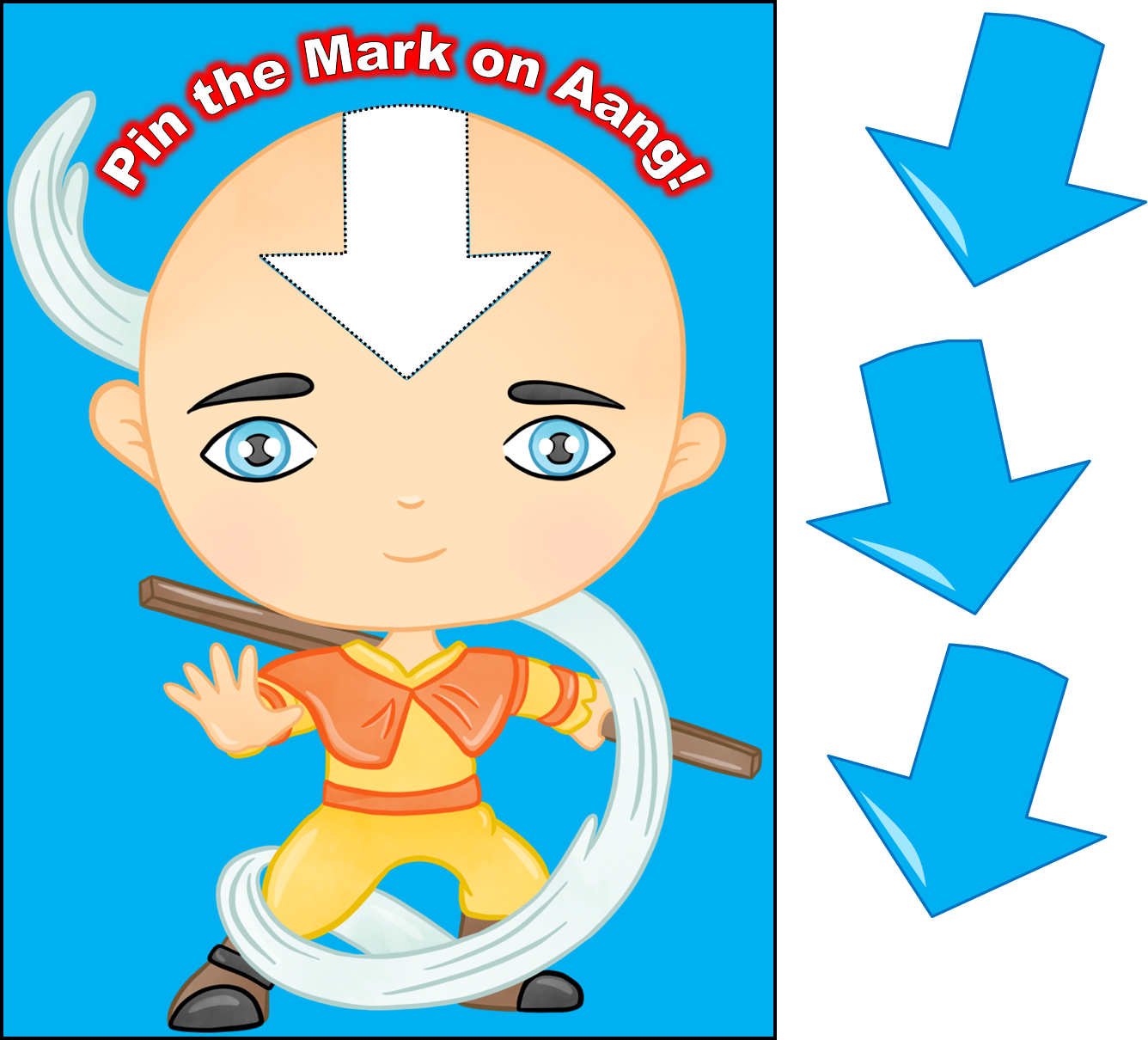 Print our exclusive Pin the Mark on Aang party game at home or at your local print shop.  This game is played just like the classic pin the tail on the donkey except instead of a donkey you have Aang, and instead of a tail you have the Last Airbenders signature blue arrow.

Player take turns being blindfolded and spun around three times.  They then stick their paper arrow as close to the outline on Aang as they can.  The player closest wins! This game is great for younger fans!

For this challenge you will need to create three balance hats - to make these you take a paperplate and elastic and create a hat so that it can be worn on the players head. You will also need three ping pong balls, bubbles (a bottle for each kid), two red balloons, a cup of water, and straws.

First create an arena circle by drawing it on the ground or marking it with cones.  Three players face off at a time.  One player will represent Air, another Water, and the third Fire.  Each player will wear a balance hat and their goal is to not let their ping pong ball fall off it it while they are bending.  They can not hold or touch their hat with their hands.  The Airbender is given a straw. The Waterbender is given a cup of water, and the firebender is given two red balloons that represent fire balls.

The other children stand outside the arena circle and blow bubbles into it. The three benders inside must use their element to pop the bubbles WITHOUT letting their ping pong ball fall off their balance hat.  The Airbender pops the bubbles by blowing it with their straw, the waterbender pops their bubbles by catching them in their cup of water.  The firebender pops their bubbles by catching them between their two fireballs (balloons).  The object is not to pop as many bubbles as possible, but to do it while balancing the ping pong.  The last one with their ping pong ball wins!