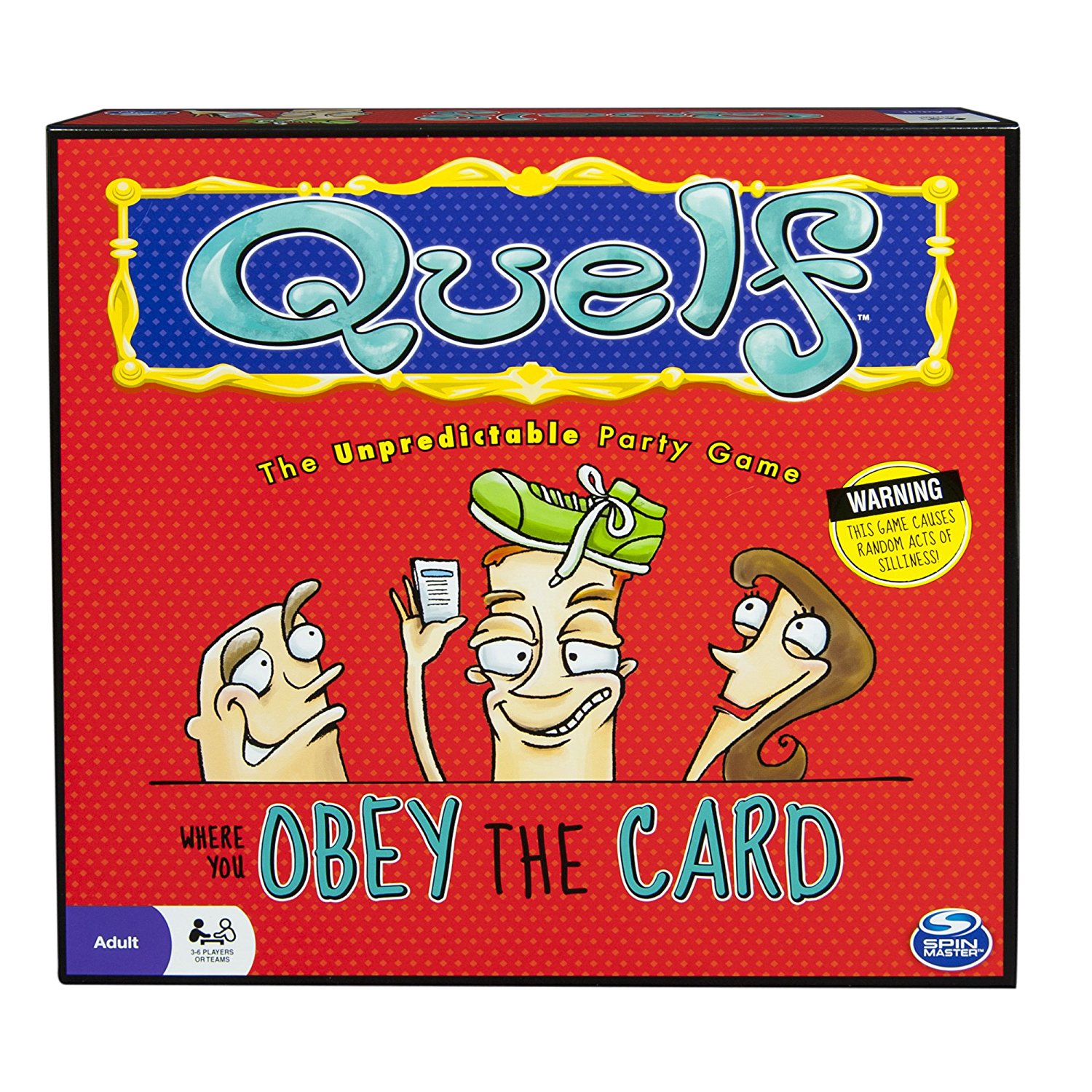 Quelf is the unpredictable party game that gives Random a new name!

Whether you're answering hilarious trivia, performing ridiculous stunts, or obeying silly rules, Quelf will inspire you to use your creativity, wit and sense of humor in ways you've never imagined.

As you move around the game board, as one of eight quirky characters, crazy things start to happen. Your friends start talking strangely. Your mom's face is wrapped in toilet paper. Your dad is acting like Dracula. And you are reciting a poem about your armpits.

Rulez - rules you must follow: snort like a pig when you laugh, say everything twice, roll the dice with your elbows

Scatterbrainz - choose one of two topics and everyone gives answers until no one can think of a valid one ("Ways to get your leg out of a spring-loaded, steel bear trap" or "Brands of Lipstick")

Love this. Our family has hysterical times playing this every time we are together. Also a great party game if you have a bunch of extroverts. Who knew watching your friends stick their thumb up their nose while yodeling would be so hysterical. Great to play in a house setting. I don't recommend doing it while you're camping though, lol.

Oh this game...what can I say about Quelf? This game can be described as; terrifying, hilarious, obnoxious, side splitting, embarrassing, exciting, crazy, absurd...and so much more. In certain company I am reserved, quiet, thoughtful, some might even say, "shy." This game terrifies that side of me. It pushes you out of your comfort zone and makes you do things you would never otherwise do in front of polite company. Then in the right company I am loud, ridiculous, and childish. This side of me gets a thrill from this game because I get to watch people do things that they would otherwise never do. There's nothing like watching your crush bust out of his shell while rummaging through your kitchen in front of all your friends to find items the card told him to find. You just have to play it to see what I'm talking about! Please go out and play this game because the world needs you to be ridiculous, silly, excited, and laughing so hard you cry! That's a guarantee with Quelf :)

We had so much fun playing this game!!

SO funny, comparable to Cards Against Humanity, except younger audiences can play this too. I would say anyone young enough to read WELL. on their own, could participate in this.

You have to be willing to get up and participate though, sometimes the card will say "pick someone to 'seek' you and go hide" or along those lines, so if you're super self-conscious or aren't willing to move about, then don't bother ..or get ready to come out of your shell!

We really had a great time with this game.. but my mom wasn't too interested in "talking like a Baptist Preacher" until her next turn ;) Watching my pregnant sister have to do everything with her feet, though, that was hilarious!

This is a really fun and silly game that's great for the whole family or a room full of drinking adults. My 14yr old had been asking for this game for 2 years. The first year they were sold out when I went to get it and this year, I just ordered it from Amazon. We have already played this game more than just about any game we have. Highly recommended for everyone!