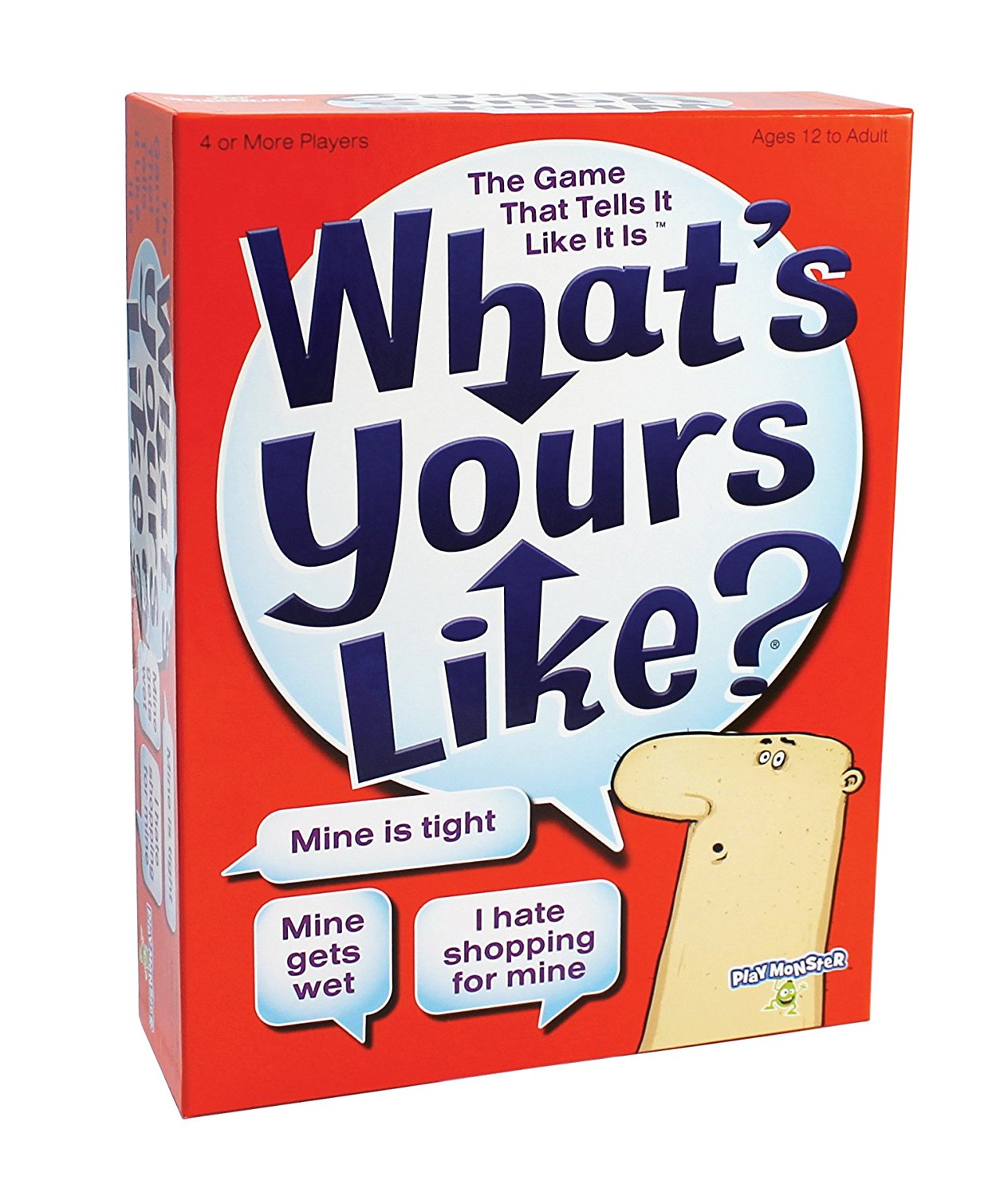 Everyone sees the card except the person in the hot seat. Then y'all take turns describing yours, doing so in a fun way but hoping that hot-seat dude doesn't guess what's on the card.

Be clever, be witty, or be outrageous when describing your swimsuit, neighbor, closet, hair or whatever Guess Word is picked. But, best of all, be creative so you don't reveal the word to the player in the Hot Seat. Get ready for some side-splitting laughs as players answer What's Yours Like? For 4 or more players

I bought this game for our game night. We have tried so many other games, and were looking for something a bit different. The basics of the game are: you pick a card with a word on it, everyone gives hint to one person, and that person has to try to guess what it is. It can be a little challenging when trying to come up with clues. You don’t want your clue to be too easy “mine cleans the clothes”, and you don’t want it to be too hard “Mine is white”. Other times, you simply don’t know what to give as a clue because you don’t have one, or know anyone who has one. After about 2 rounds, if the person hasn’t guessed it yet, or we are running out of ideas for clues, we normally start to give really easy clues.

There are 248 cards, double sided with words. It will definitely take some time to get through all the cards which is great. There are also blank cards for you to write your own words on. Everyone who has played, has loved the game. There are times when we completely lose track of time because we are having so much fun playing the game.

We played this game for a couples night. It provided hours of fun. It's amazing to see how everyone minds run in totally different directions when given the same set of clues to guess something. It also is a great conversation starter! It's fun. Adults who played were 30-45. It is a great, fun, game! It's very simple. It's also easy to change the rules to fit your group. Love it!

I bought this game hoping it would be like cards against humanity. It's not, but it turned out to be amazingly fun. It takes a couple rounds to get the hang of it, but eventually you'll be trying your best to confuse the person guessing the word. It's kids friendly too (as long as the adults behave themselves, which is always a challenge for me). We invited a new couple over for dessert and played this game; we played till 2am!

You need creative people to play this one. One bad player can and will ruin this game. Example, the word was broom. I gave the clue corn, as we have a corn broom. Next clue was dirty. Now the person in the hot seat had no clue, as the clues didn't seem to match at all. Well enter my sister, the bad player and gives the clue sweep. Normally I do not think about slapping my sister, who is over 50 and a doctor, but c'mon. The hot seat guesser got it right after that.But if you play with people who can give great clues but not obvious clues, this game is a blast!