-Quick! Think of a funny new meaning for LOL. Now imagine what that would look like drawn as a picture. You just laughed, didn’t you? That’s a Laughcronym.

-Quick! Think of a funny meaning for PDA. Now imagine drawing it out. You just laughed again!

-Picture yourself doing this with a great group of friends. That’s Laughcronyms!

LaughCronyms can be played either family friendly or as adult humor.

Use your unique sense of humor to think up hilarious new meanings for acronyms (like LOL, PDA, BYOB, etc.), then sketch funny pictures of them. Doesn't matter if you can draw or not. Artistic ability not required!

What makes Laughcronyms such a fun party game? With other party games, you have to rely on the game’s writers for everything funny. While playing Laughcronyms, you’re the writer and you get to have all the creative fun! You’ll use your own imagination to be as hysterical as possible. 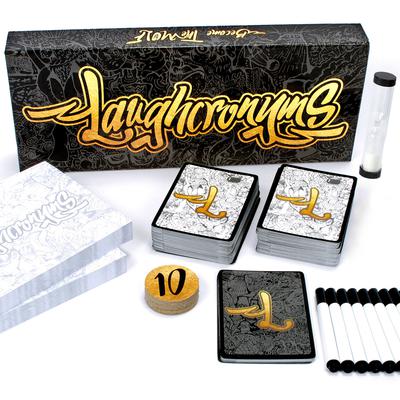 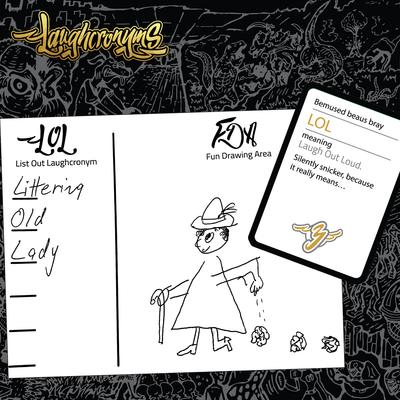 Absolutely perfect for adult humor, but can also be played family friendly. You can play with great granny, little Jimmy, or your most hilariously inappropriate friends. Since you make up the meanings, you can be as tame or taboo as you want to be!

You'll play Laughcronyms over and over without ever getting bored. It's a brand-new experience every time you play! With 132 acronym cards and 32 FIBS cards you’ll get to make up funny new meanings for over 4,000 different scenarios.

What sets Laughcronyms apart is everyone gets to play in every round, even the MOLF! In other party games “the judge” doesn’t get to play in the round. They just read other players (pre-written) answers. That’s no fun!

Also, everyone votes each round. So you play during the whole game! No waiting while only “the judge” gets to determine what’s funny.

Laughcronyms lets you use your imagination to create everything funny! You’ll never be forced to use what someone else wrote. It’s way more fun to play, and will never get dull or repetitive! 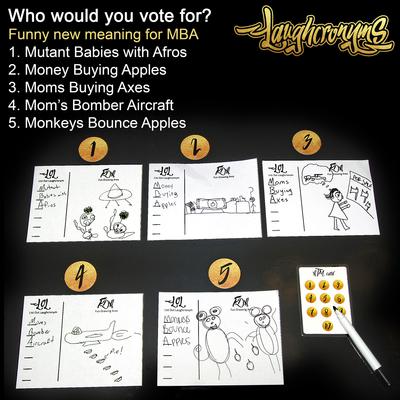 -The MOLF (Minister Of Laughcronyms Fun) leads each round.
-Players make up funny new meanings for the same acronym then draw funny sketches.
-The MOLF reads the new meanings and shows the drawings to everyone.
-Everyone votes for their favorite (you just can’t vote for yourself) and that player wins the round!
-The player who won gets points and is the MOLF for the next round!
-Continue playing to 21.
-Whoever wins the game gets to be called MOLF for the rest of the night!
-FIBS (Fun Invoking Bonus Scenario) cards are scattered throughout the deck. They create a scene you’ll answer with your Laughcronym for double the points!
-Lasts 40–60 min, or however long you want. 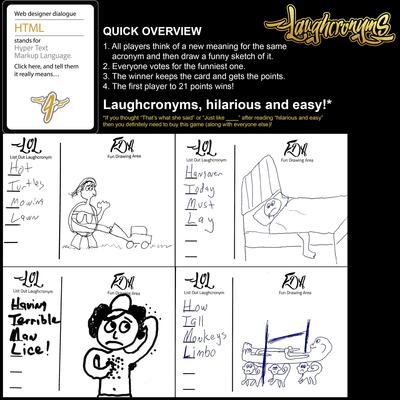