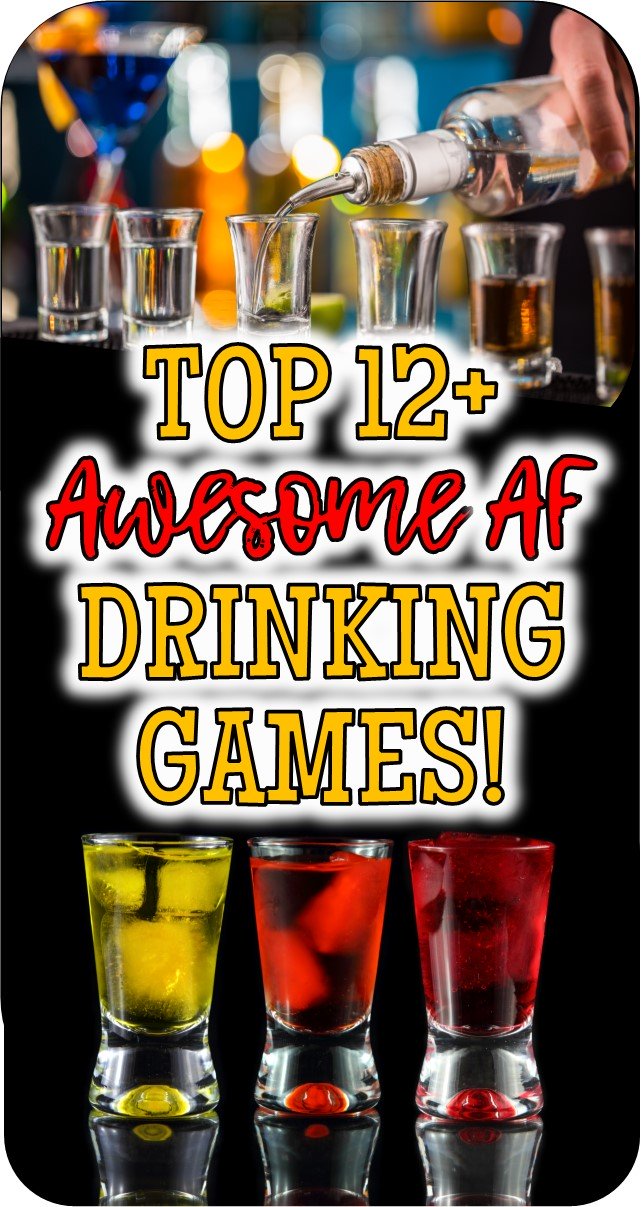 Here is a list of my top fun drinking games for a night you will wish you could remember - j/k I hope, but they aim to liven up your next party. There is a variety to choose from. I have some fun dice and card games. Some drinking party games to play to get to know your friends better, and some games that are just hilariously funny.

If you are looking for drinking board games you can purchase instead of the DIY and printables you will find on this page you will definitely want to check out my compilation of TOP 10 DRINKING BOARD GAMES!

This is an easy dice drinking game without cards. You will only need 1 die. Roll the die. The first person must match that number, by rolling the exact number, or rolling two or three numbers that add up to that.

Each person gets up to three rolls. If they don’t make it they have to drink. Then the turn moves to the left, that person must match the last number rolled, and so on. This is an easy but fun drinking game. 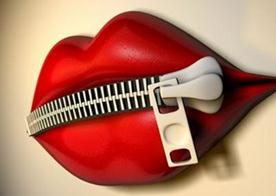 At the beginning of the party hand everyone an index card with a somewhat common word ,phrase, or action. It should be something that is bound to be said or done at least a couple of times, but not one that will be said every other sentence, or done too often. Everyone gets a different word , phrase or action. Every time they hear someone say their word or phrase, or see someone do their action, they can call out “taboo” and that person has to drink. Here are some fun examples:

This is a fun drinking game that can be played the entire party while everyone is mingling and having fun. If you have other drinking games this can even be played while playing those… its ongoing. 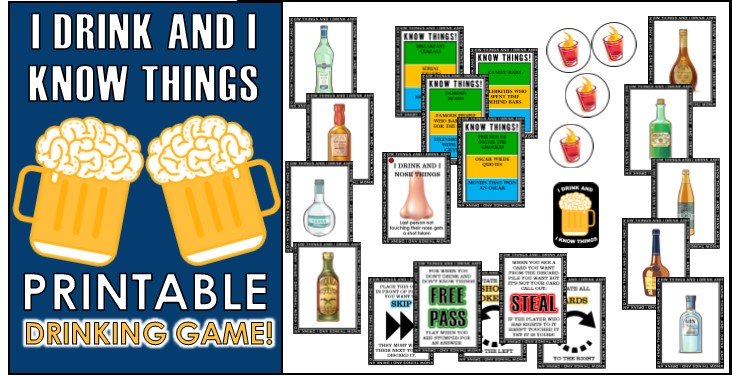 I love Tyrion Lannister, he drinks, and well...he knows things. He was also the inspiration for this game! 'I Drink and I Know Things' challenges your friends to a game of random knowledge and shots.  The more you know, the more you can make your friends drink.  Don't get too confidant though, a rule card could come along and change the whole game.  Include fun rules such as ' I drink and I NOSE things', when this card is played all players must quickly touch their nose, last one to do it must pay the consequence. 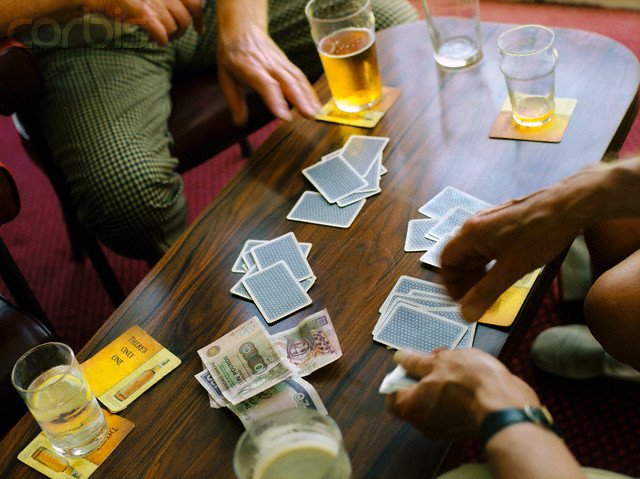 This is one of my favorite fun drinking games. Everyone gets dealt 8 cards; you play with as many decks as you have to. Put the rest of the cards in the center.

First card is flipped up from the center.

The first player must lay down cards from their hand that match the numerical value of that card. They can use as many cards as they need to match it. For example if the card is a 9, they can lay down a 5 and a 4, or they can lay down a 4, a 3, and a 2. They could also just lay down a 9. They can place the cards on the top of the deck however they want, thus determining the next top card

The next player must match the new top card, if he/she can do this using less card then the person before him/her they can also make one other player of their choosing drink, and another player take two more cards.

The object of the game is to get rid of all your cards first, but the fun is you also get rewarded (by making others drink) for using as few of your cards as possible.

Winner can doll out three drinks, they can do this all to one person or split it up. 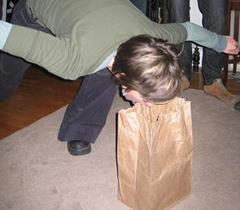 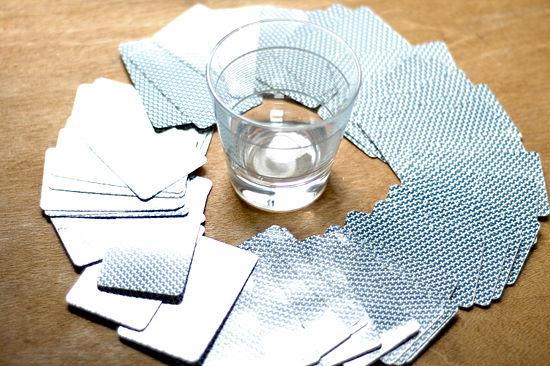 Everyone gets 5 cards. The rest of the cards are spread out in the middle of the table. You can play with multiple decks if you need to. First player goes fishing (picks a card out of the deck) and flips it up.

Everyone must quickly lay down a card equal or higher to that card. If they can’t they may pick up one card out of the fish pond. If they can play this card they must, if not they have to drink. The last person that either drinks or lays down their card must drink twice. All the cards played are then mixed back into the fish pond. Highest card laid down starts the next round.

If a player lays down a KING then before the next round everyone must pass their entire hand to the right.
First player run out of cards wins! They may doll out 4 drinks however they wish. 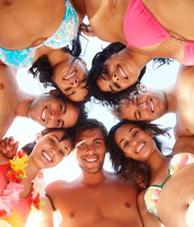 This is a funny drinking game where everyone forms an even circle around the table. Place 20 jello shots, or drinks on the middle of the table. Everyone puts their heads down and on the count of three looks up at another player.

Keep playing until there are no more shots. Then play again if you want. This game is best if you have six or more players

This party drinking game is HILARIOUSLY FUN! Fill a bunch of 4oz baby bottles (enough for each player) with your choice of alcohol. At the start of go everyone must suck the baby bottle empty. First one done is the official best sucker! And may doll out three shots however they like. The last person who finishes must take three shots themselves. Nipples come in different size holes so make sure you get them all the same, and don’t get the newborn ones or it will take too long. Don’t worry the packages show the nipple sizes on the box. 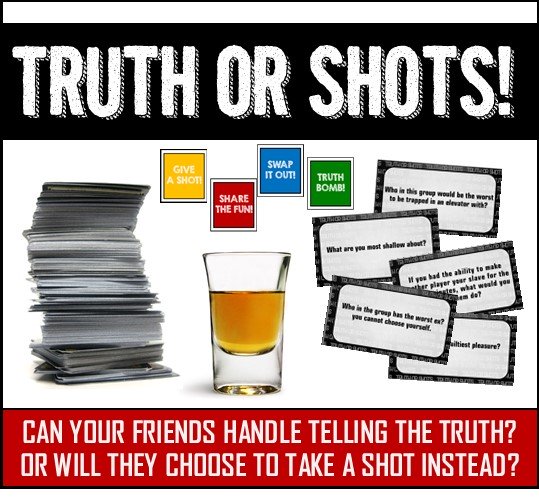 Truth or Shots is just what it sound like - you and your friends answer sexy ,awkward, twisted psychological, and sometimes evil truth questions, those who refuse to answer must take a shot.

Coming up with good truth questions is sometimes hard, but it will make or break the game!  We provide over 180 on easy-to-print cards that will definitely win the night.  You may not have thought of these questions yourself, but you will be glad we did.

To play spread the cards out on the table and have each of your friends take turns drawing and reading one.  They must answer the question they drew truthfully or decline and take a penalty shot.  We also offer bonus cards that will give each player one chance to make another player answer their question, make another player take their shot, swap for another question, or come up with their own truth question.

This is a fun twist on the never have I ever drinking game. This game is not as complicated as it sounds (it was just hard to write) and it is a hilarious way to combine, drinking, getting to know your friends better, and gambling on how well you already know them.

Pass all players 4 index cards. Have them each write something they have never done on two of them, and something they are guilty of on the other two. Collect all the cards and spread them out in the middle of the table. Give each player ‘verdict cards” ,these are two index card one that’s says lie and another card that’s says truth. Have them write their names on each.TO PLAY: One player picks a card, they are now the defendant. if their card is a:

After, the defendant is finished, play goes to the left and that person becomes the next defendant. Game can be as long as you want it by deciding how many times everyone will get to be the defendant.

This is another funny drinking game. This game can be played throughout the entire party. One person is designated Mr. Freeze. At any point during the party he/she must freeze. Everyone that notices must follow suit. The last person to catch on must take a shot. A new Mr. Freeze is chosen.

check out these other
out-oF-the-box dRINKING gAMES! 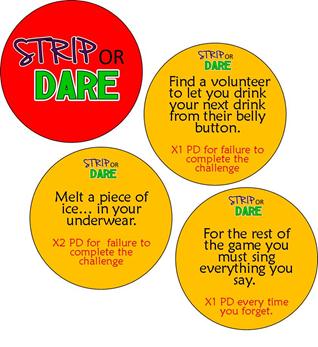 If you have been living under a rock and have never hear of beer pong, click Official Beer Pong rules to learn all about this college drinking game craze!

Now for those of you who would like to amp up your next game of beer pong you may consider this strip or dare version.  WARNING: this game is not for the shy or timid, and is meant to be played with spectators.

In Strip or Dare Beer Pong, you play just like regular beer pong except that once you down your drink you must choose to either strip or dare.  If you choose strip you must remove an article of clothing..duh!. If you choose dare you can then read the dare at the bottom of your cup.  You must either complete it or take the penalty drinks.  You can create your own strip or dare beer pong game of purchase the printable version here.  It comes in a INSTANT DOWNLOAD.  All you have to do is print, apply to your red solo cups, and get ready for a night you'll never forget, but you may not remember the next day. 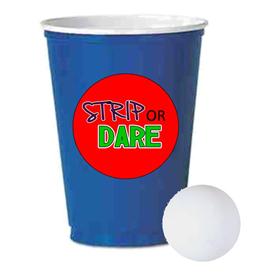 Roll 5 dice. Keep any three’s, and roll the rest again. If you have no three, then keep the lowest number dice and roll the rest. Once you “keep” a die, you cannot change it, and you HAVE to keep at least one die per roll.
Keep going until you have no more dice to roll then total up your dices. Three’s are worth 0, the rest count as their face value.
Pass the dice to your left. The winner is the person with the lowest total. The person with the highest total must drink as many shots as the winners score.
Winner starts the next round. The rounds go pretty fast. 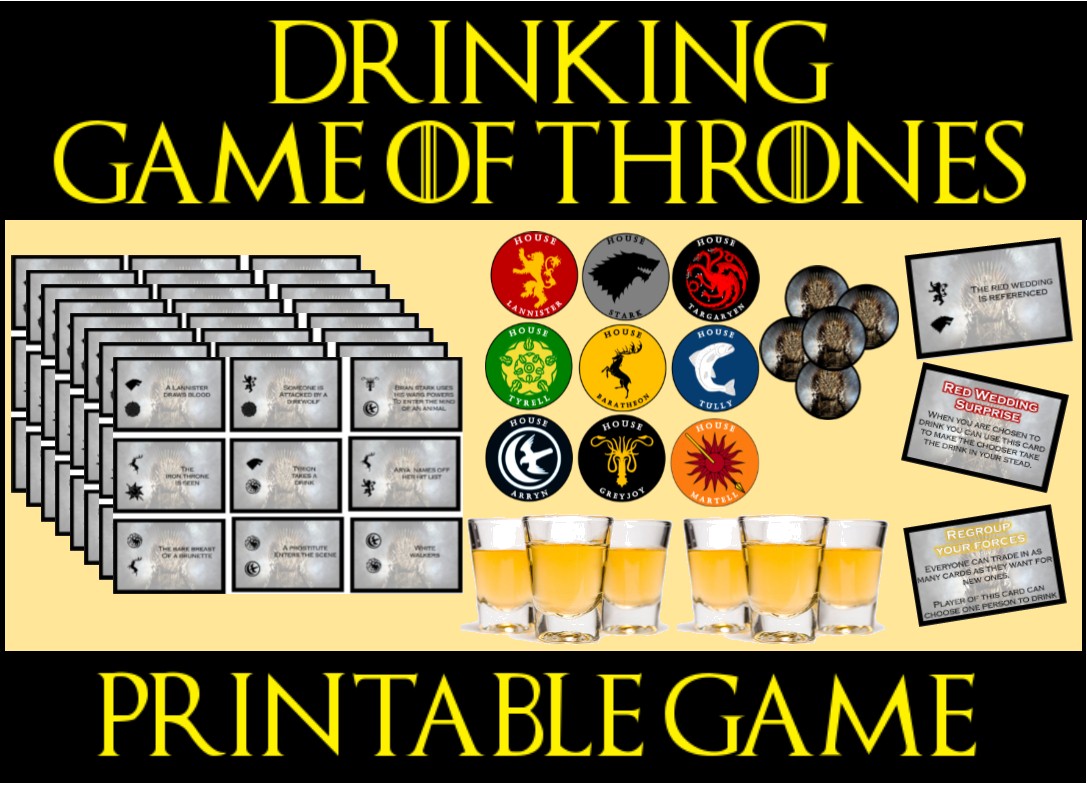 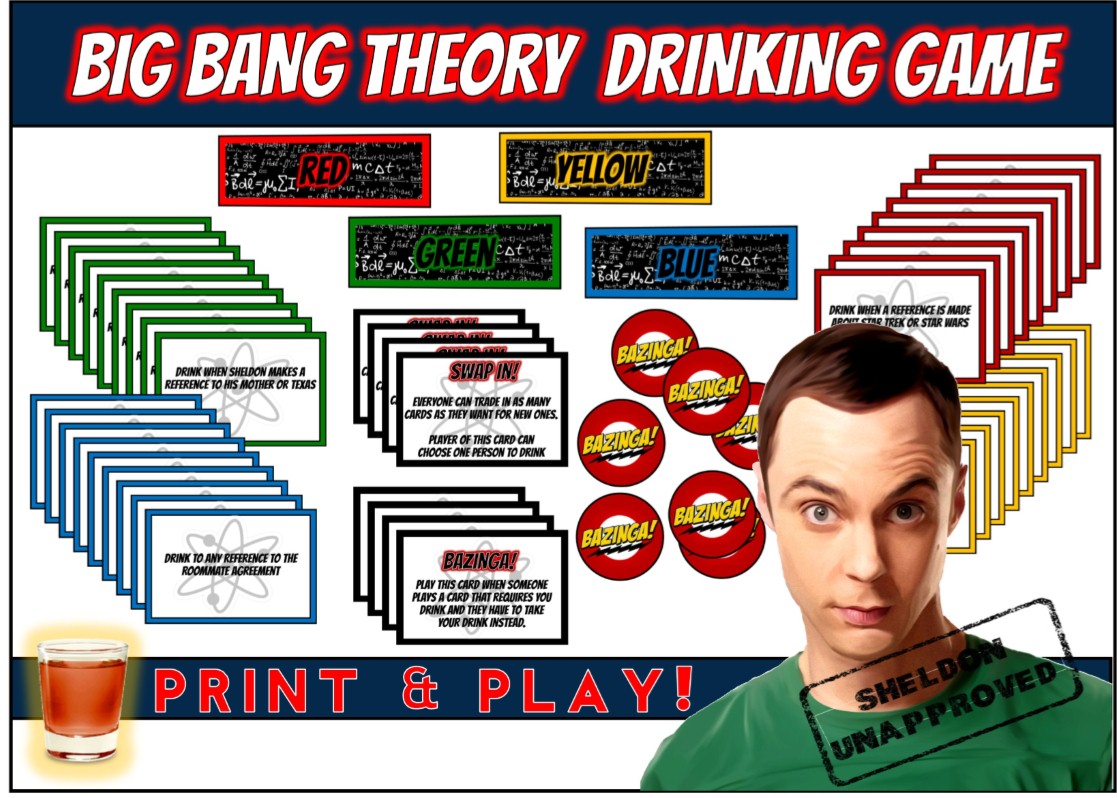 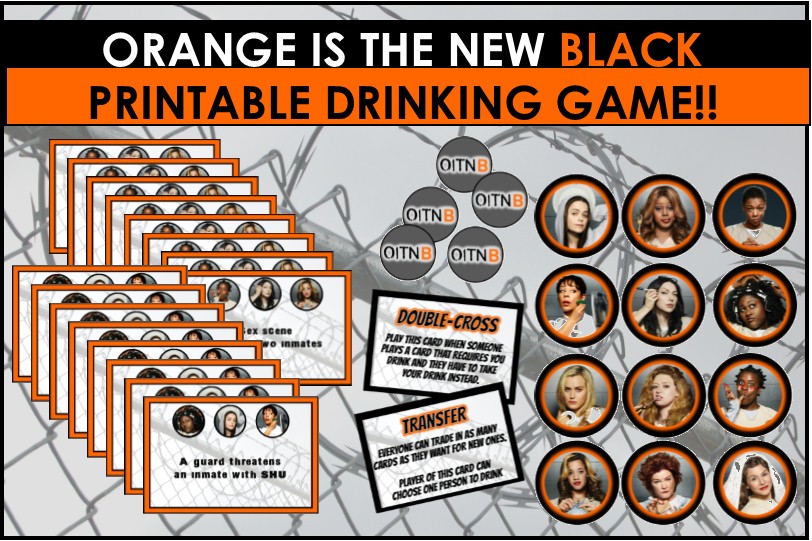