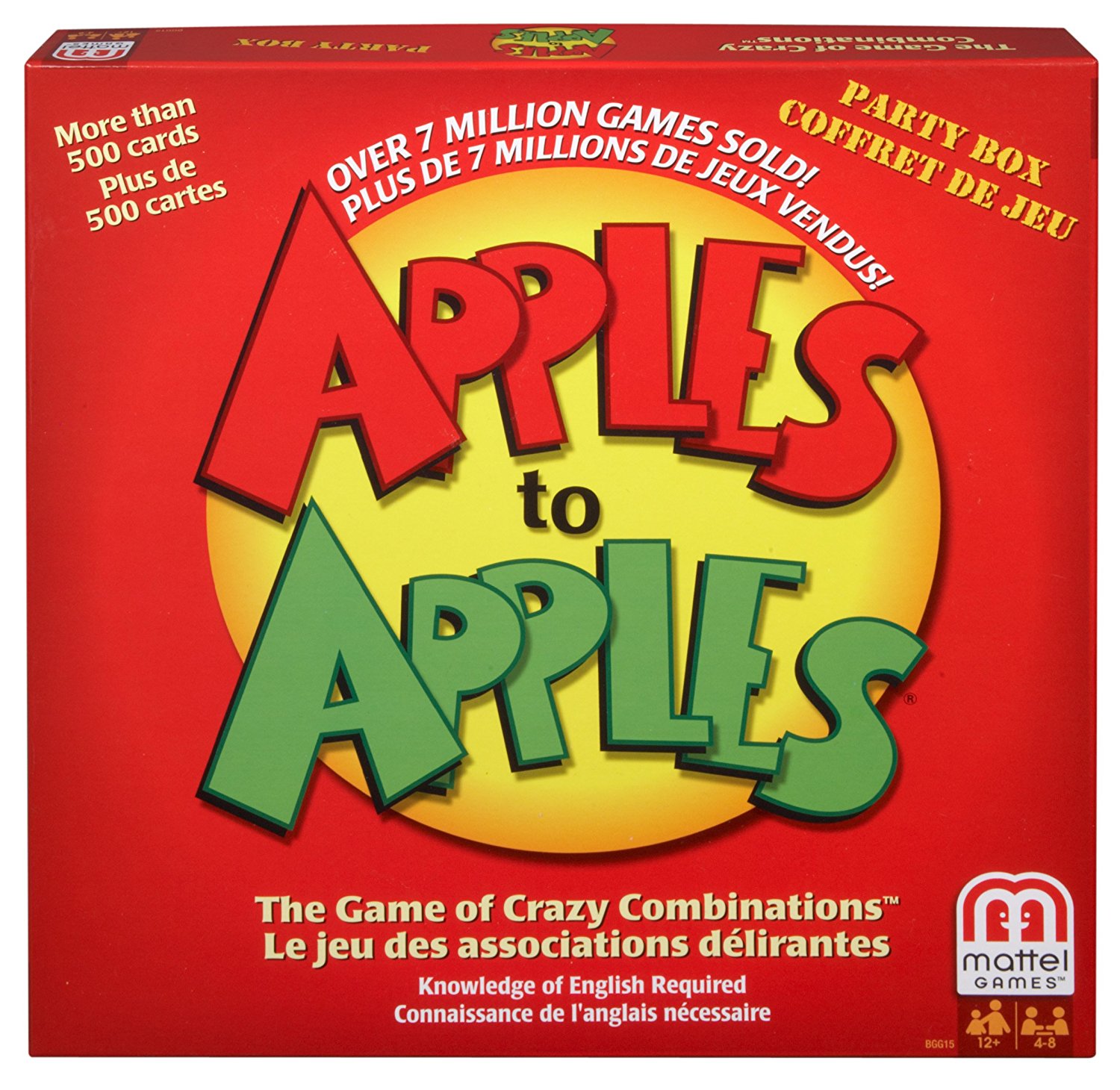 The card game that’s won numerous awards, Apples to Apples creates lots of laughter and party-time joy! Apples to Apples challenges you to think on your feet, get a little silly, and find out how your friends and family think. You’ll be surprised time and again!

Easy to Learn, Fun to Play

There are just two types of cards: Things (red cards) and Descriptions (green cards have two descriptions on each card). Each player takes turns being the judge and pulling the next Description card. The other players try to pick, from the cards in their hands, the Things they feel best match that Description—in the eyes of the judge (so it helps to know your judges a little better, too).

The first player to collect 4 Description cards wins the game. And with so many cards and possibilities, it’s never, EVER the same game twice.

What’s in the Box?

This is best played with 3 or more people. We've played with as many as 9 people and it was so much fun!

This game has cards that are current and relevant to today's news, memes, fads, sayings and fashion.

Every player gets a turn: you take a green card with 2 words on it. You choose which word you want and the others choose from their hand of red cards which one matches your word the best. Whoever put the winning red card in, takes the green card as a win.

It is a fun way to find out just how twisted and fun your family and friends are!

Although this game is called 'Apples to Apples', it is definitely not 'Hi Ho Cherry-O'

We might need an expansion pack for more cards!

Before purchasing this, I had played Apples to Apples exactly one time. It was at least 4-5 years ago, but I will never forget it. For some reason, The Common Loon was hands down my favorite card and I would choose it 80% of the time it was played while I was judge.

This box set is both good and bad in my opinion. There's a ridiculous amount of cards, meaning there's potential for many amazing and hilarious combinations, but on the other edge of that sword is the fact that there's way, way more potential for combinations that make no sense, giving you terrible hand after terrible hand. If you play to win, you shouldn't play. The main satisfaction derived from this game is playing with a large group of people and having 30% of the cards played be delightfully funny. Can I fault the game for these perceived transgressions? No. This game was made to be playable by a large age range, and I think it is.

Other notes: they've added to the rules from what I remember. It doesn't matter, you can play however you want, but the new set of rules feels convoluted. Maybe I just played the wrong way the first time.

I still love this game

This game is great because it can be played with such a varying number of people and you won't always have that one person that always wins. It helps to know a little about the personality of the people you're playing with. Some will be very literal and pick the card that is a perfect fit, while a more funny player may decide to pick the one that is the most ridiculous. It's good for different ages because a child can play with the way their mind works, but a bunch of adults playing together can make card combinations whose humor may go over the head of younger groups. Don't worry, nothing dirty that you'd have to filter the cards for. There is something for everybody from pop culture to more historical cards. It also has blank cards that allow you to create your own but I've never cared used those. I'd recommend it as the perfect impromptu game when company, even a less familiar group, is over as it gives you an insight into how each player thinks and it a perfect ice breaker.

This might be the ultimate party game. Cranium has got too many embarrassing activities for us introverted folks, Scattegories inevitably leads to arguments, and not everyone enjoys video games like Mario Party and WarioWare. Apples to Apples is hilarious, "family-friendly", and so easy that basically anyone can learn to play in just a couple minutes. You can pretty much play with as few or as many people as you want to and for as long as you want to. The box has recommended end points for given numbers of people, but you can really end this game whenever it's convenient and just call the person with the most won cards the victor. The game comes with a couple of blank cards for you to customize, but we went through our decks with Sharpies and altered any cards with people/events/etc. that we weren't familiar with, so our game is extra-customized. There are also expansion decks available, as well as the "sour" version, in which you can lose points, as well as gain them. If you enjoy Apples to Apples and your circle of friends can handle copious amounts of hilarious crudeness, then I also HIGHLY recommend Cards Against Humanity, which is exactly like Apples to Apples, but R-rated (at least).

PICK UP APPLES TO APPLES AT YOUR LOCAL DEPARTMENT STORE OR ORDER IT RIGHT NOW FROM AMAZON.COM!