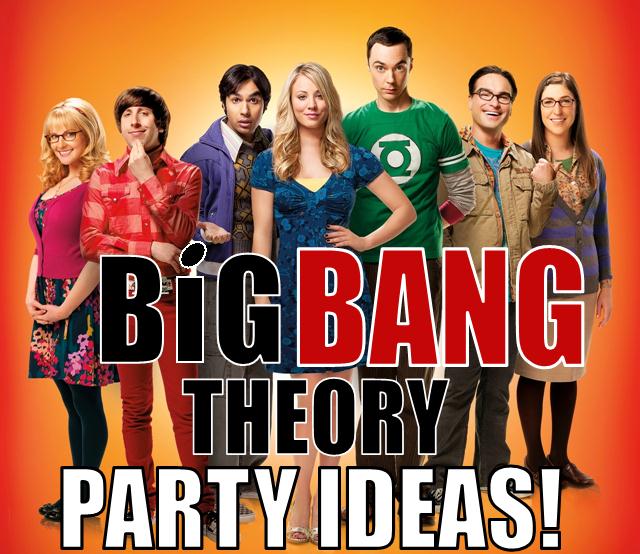 I compiled this list of Big Bang Theory party ideas because I am a HUGE fan of the Big Bang Theory since the beginning. It’s true that I am more of a dork than a nerd ( I couldn’t do calculus to save my life and I don’t know one word in Klingon) I thought it would be cool to to throw a nerd party in honor of this hit television show. I did some brain storming, surveys among my nerdy friends, and web surfing to come up with the following ideas will provide just the right amount of nerdy inspiration for your Big Bang Theory party.

Invite all guests to dress as wither their favorite character from the Big Bang Theory,  or as a comic book character, Star trek character, or other sci-fi character. You can create a nerd trophy for best costume by purchasing a pair of thick, black nerd glass, taping the center, and gluing onto a base. 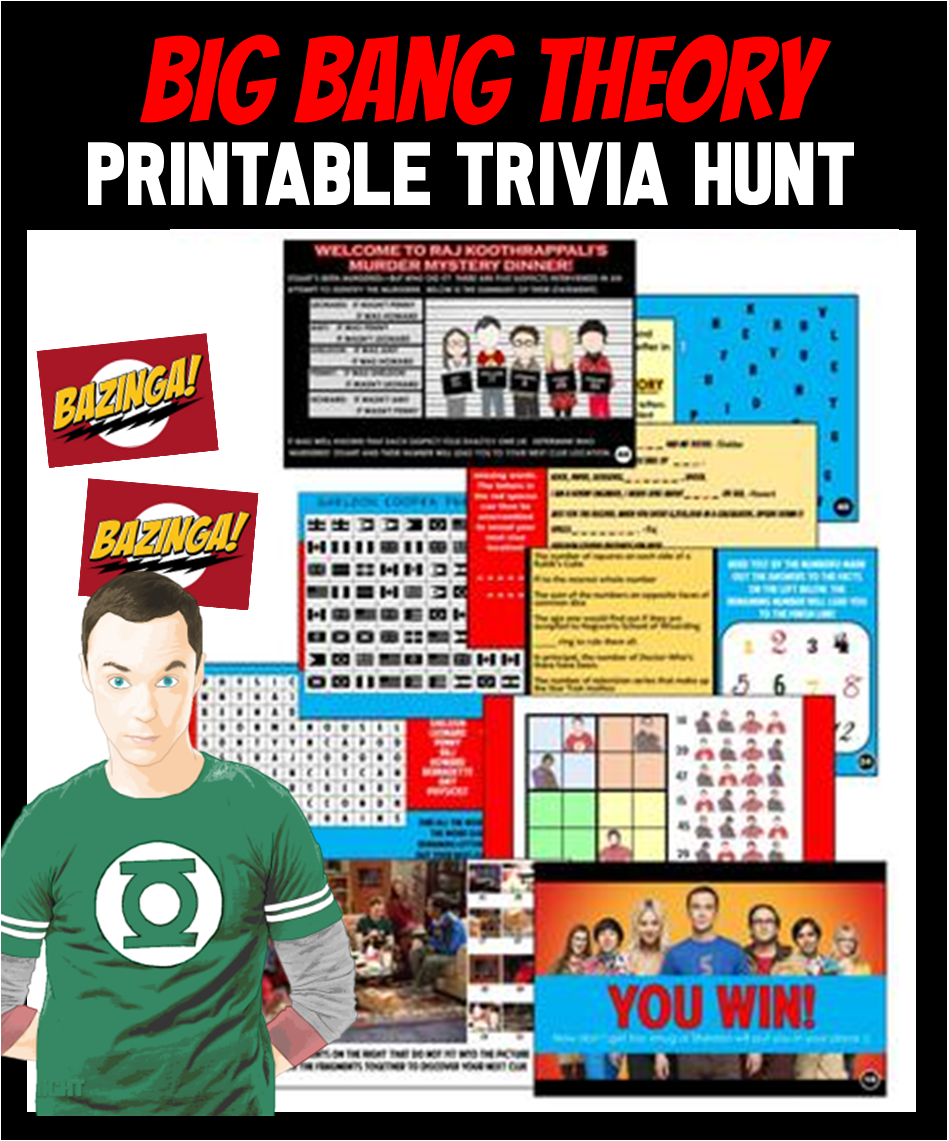 A treasure hunt like you haven't played before. Each clue test you and your friends knowledge of Big Bang Theory in a fun and different way.

The correct answer will lead to the next clue and then the next until the prize is found.  You can play this game anywhere because you get to decide the hiding locations.

See how well your guests know the show by having them test their Big Bang theory knowledge with our BBT trivia game.  Other fun trivia games could include Star Trek trivia to determine who is the biggest Trekkie,  or superhero trivia to decide who knows their comics best.

Set up a picture of Sheldon's nemesis Will Wheaton on the wall and draw target circles around him.  Have guest take turns throwing darts at the poster. Of course you can use any other of Sheldon's enemies for this game as well. 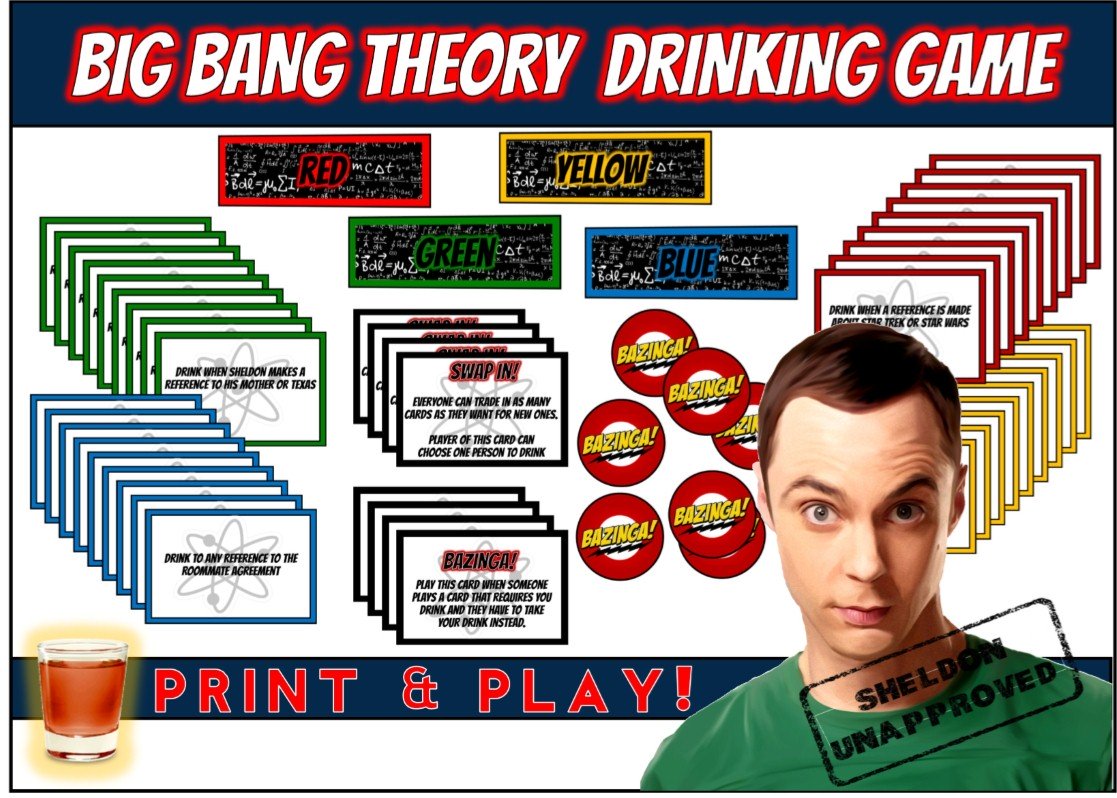 This drinking game is hilariously fun.  It is made to be played while you watch the show.  Deal the scenario cards and when someone see's a scenario on the show that matches one of their cards they lay it down and BAZINGA... someone has to drink!!

Guests form a circle.  One person holds a kitty plush (it can really be anything you can toss)  and says the first word in the soft kitty song.  they then quicky toss the kitty to another player who must catch it and say the next word in the soft kitty song.  They then toss it to another player.  If a player gets a word wrong or takes too long then they have to take a drink.  Then , of course, the song must be started over with the next player. If you don't remember the words go as follows.

Decorate  with posters or stand up’s from the Big Bang Theory or favorite nerd shows such as Star Trek, Buffy,  comic book movies, comic book covers, etc…  Cut out giant math symbols and hang them through out the party area. Purchase a white table cloth and cover it with equations.

Have a table covered in Lego’s for the nerds to play with.  Turn it into a game by guest vote on nerdiest creation.  For a Howard Walowitz twist see who can build the "naughtiest" lego creation.

Have a competition to see who can make the coolest thing from duct tape,  Who can connect the most paper clips together in a minute,  Who can white out an entire black sheet of paper with white out first or Who can solve the most algebra problems within 10 minutes. Buy a couple Rubik cubes and have a Rubik tournament to see who can put their cube together the fastest. What nerdy competitions can you come up with?

Other nerdy games could include Boggle, Scrabble, Klingon.  You could also set up video games such as Halo, Rockband, wii sports,  Dance games, etc… these games have all been seen played on the Big Bang Theory.

For food you could serve pie (call it pi), or cheesecake since Penny works at the Cheesecake Factory.  It’s a bit on the nose, but consider having bowls of nerds, smarties, and if you are planning a buffet consider featuring Chinese or Thai  food since that is what they are always eating on the show.

My printable Big Bang Theory Party Kit includes everything you need to compliment your party supplies, to include: 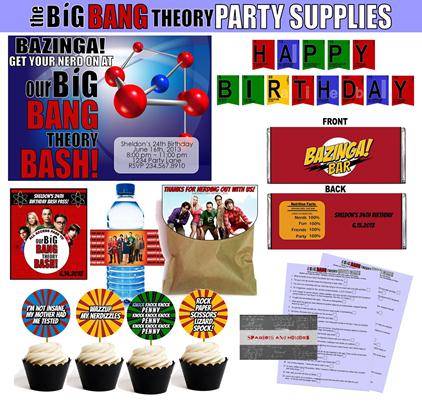 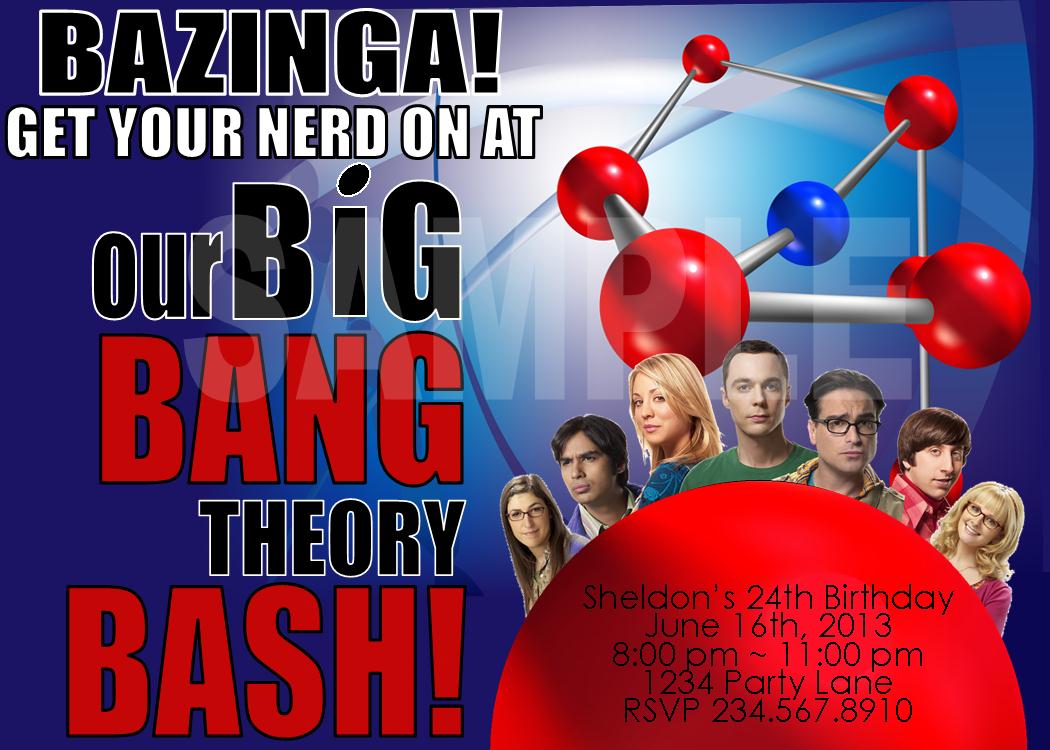 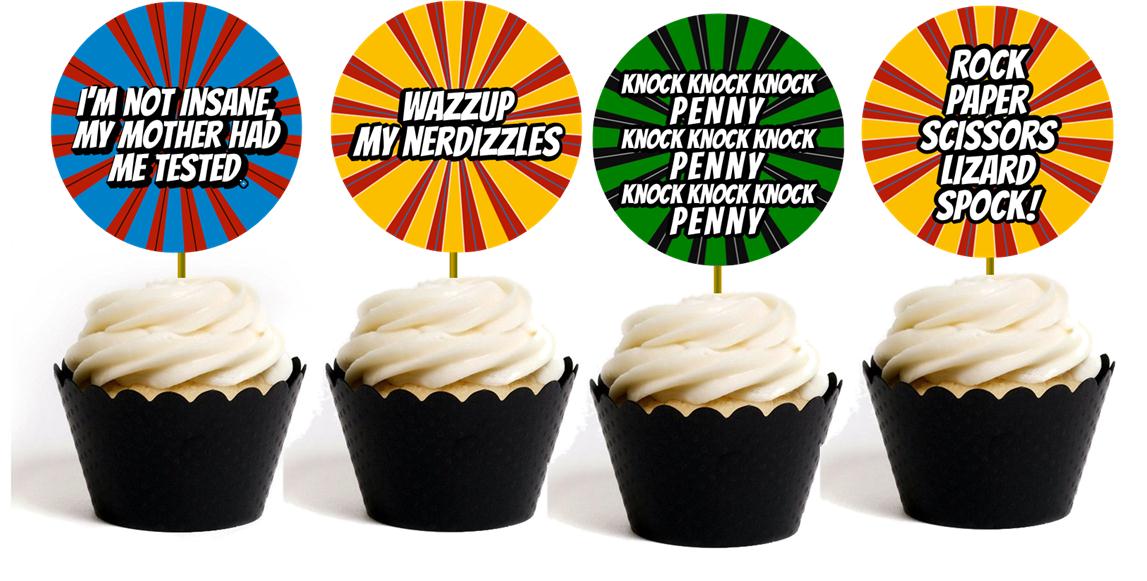 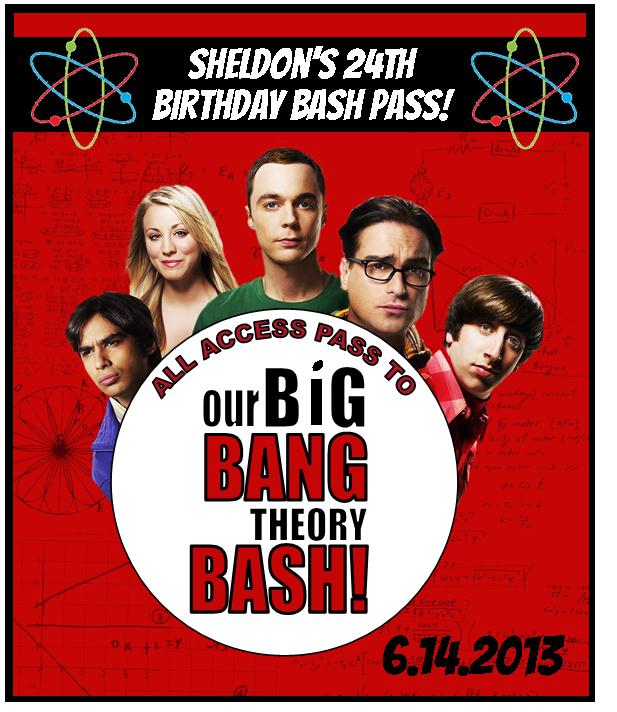 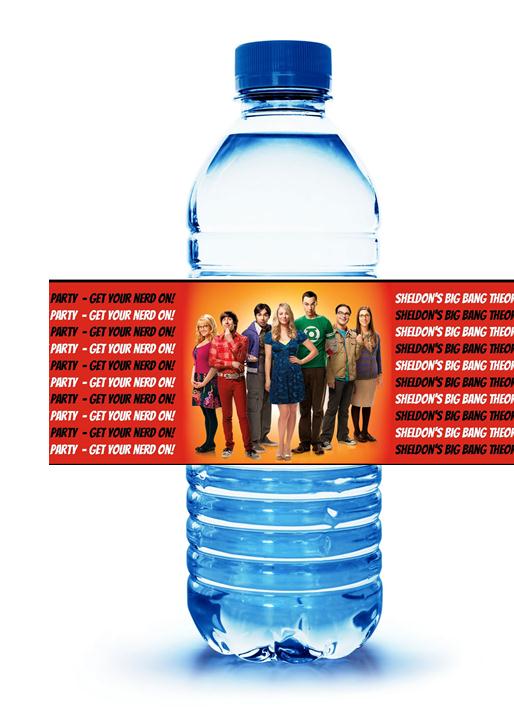 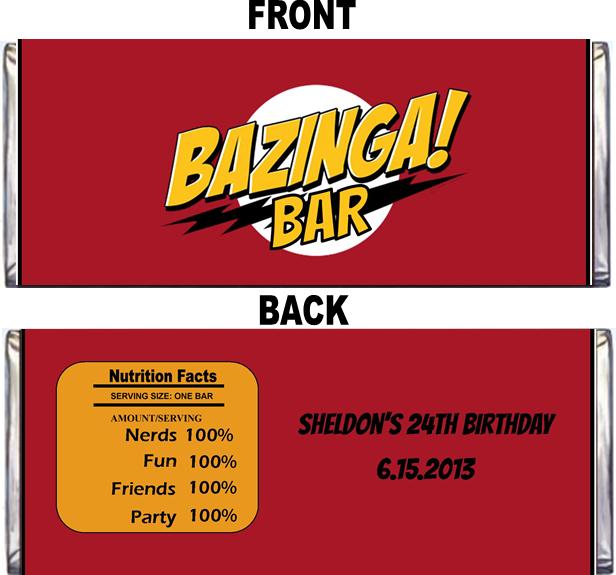 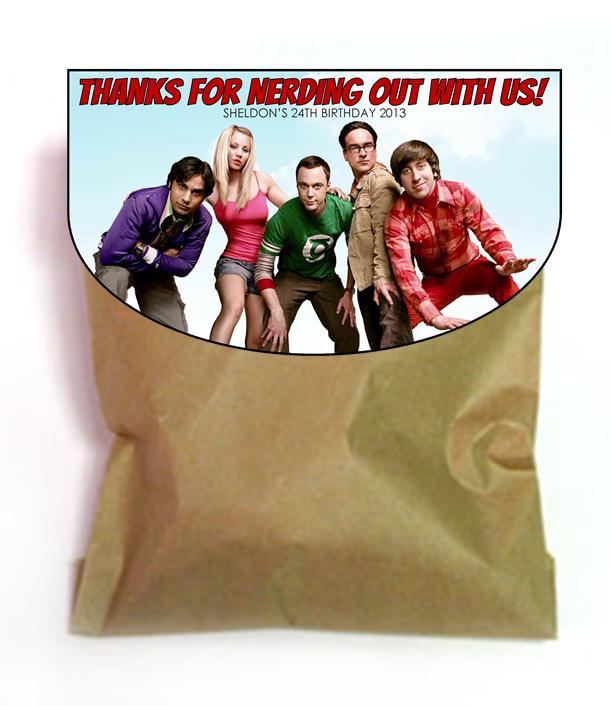