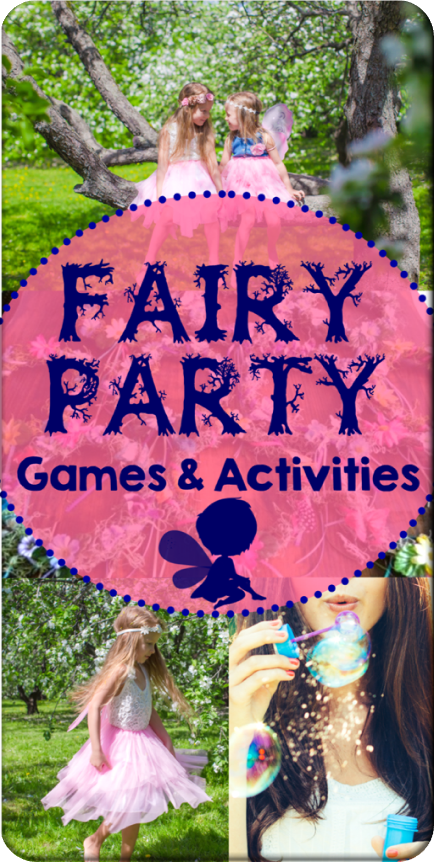 Below you will find my collection of fairy party games. At some point in time most little girls have a fascination with fairies, those of us who are lucky never grow out of it. If your daughter is dreaming of a fairy birthday party, these enchanting games can add that extra magic to her big day.

To create purchase a pack of plain hard headbands, enough for every child to have one with a few extra's in case of accidents.

Now provide tissue paper, flowers, moss,string, twine, glitter if you dare, and whatever kind of accesories you desire and have kids glue and tie to their hearts desire. Give them time to dry and then at the end of the party let all the girls show off their creation and take them home as a keepsake.

The first of the fairy party games is lily pad relay. This is a relay race involves each team getting two giant lily pads they must use to cross over “the pond” and return. The object is to never touch the floor. They hop on one lily pad and pull the other in front of them and hop forward onto that one. They repeat this until they cross over “the pond” and return to let the next princess hop. The first team that completes the relay wins. You can make lily pads with green poster board. Simply cut out the shape of a lily pad, add some details if you want and voila! The pond can be anything from a blue tarp, a blue plastic table covers, or just the designated playing area 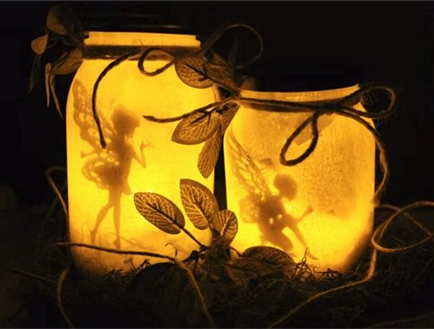 This craft is best suited for older fairies because it involves a bit of work, but if your guest are suited for it then this fairy latern makes quite the keepsake.

You need quite an array of material, but the items are easily found and you probably already have many of them. Watch the video to find out if this craft is for you.

As the music plays the fairies must do their best to keep the wuzzles (balloons) in the air, when the music stops all the girls must grab a balloon and hold it in their hand. Call out a color, whoever is holding that color balloon gets a small prize. Play until all the fairies have won a prize.

To make this game more interesting each wuzzle can have a fun challenge inside. The player must pop their balloon and complete (or try to complete) the challenge inside to win their prize. Challenges can be fun and silly:

The little fairies will be giggling the whole way through these fairy fun obstacle course games as they leap on mushroom tops, dash through the hollow tree, blow some bubbles, and face fun challenges.

You can create a fun fairy obstacle course with a little imagination and fun props. You can even include mini fairy party games through the obstacles. Some fun ideas are 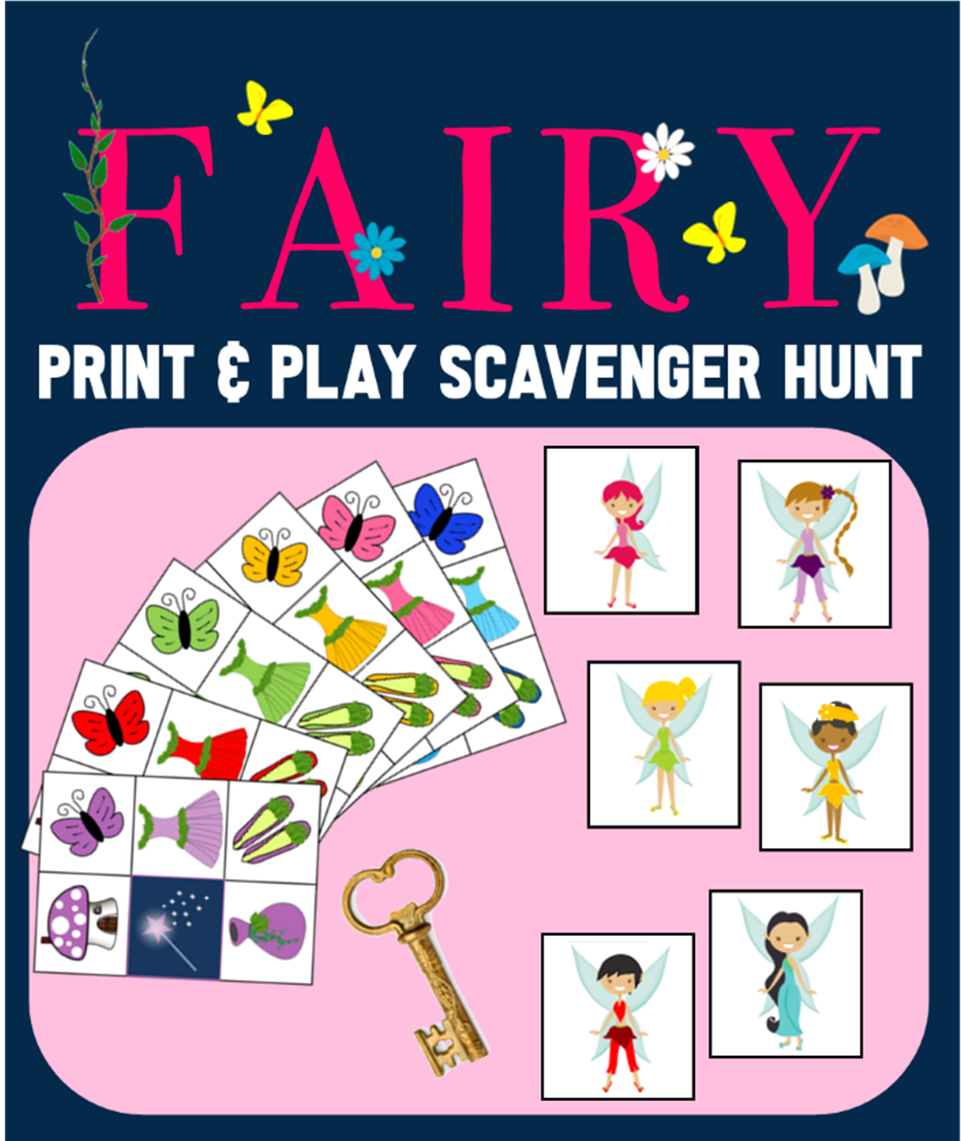 I created this printable game myself as one of my printable treasure hunt games. this game is easy to print and fun to play. Hide all the fairy items and assign each girl a fairy. They must then find all the items that belong to that fairy. All the fairy items are the same color as the fairy it belongs to so the players know whose is whose.

All the fairies lie down on the floor with their eyes closed as if they were sleeping. One fairy moves around the "Sleeping Fairies" and encourage them to wake (move, laugh and giggle). She cannot touch the fairies, but can move close and tell jokes. Any fairies that wake can join the first in trying to wake the others. The last fairy to wake is the winner. 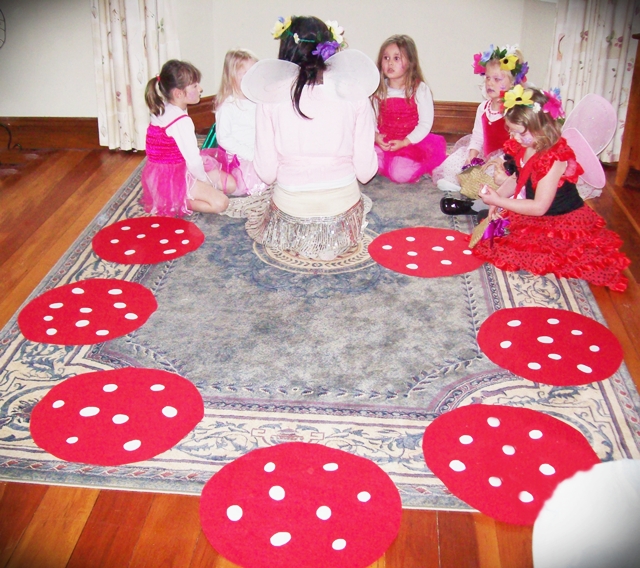 Over at greatfun4kidsblog.com she had the cutest idea for using red posterboard and putting white spots on them to create toadstool mats.

These would compliment your fairy party nicely, they could work for a place to sit when it's time to settle down - they also work to for a great game of musical toadstools.

Musical toadstools is played just like musical chairs.  Place enough mats in a circle for all except one child. Have the little fairies dance around the toadstools while music is playing - but when the music stops everyone must find a toad stool and plop down on it. The fairy that doesn't is out.  Remove a toadstool and continue playing until only one fairy remains.

The fairies must race to return the baby bumblebees to their hives (bowl). For bee’s I used lima beans painted with black and yellow stripes. Each team gets a spoon and enough bumblebee’s for each player. On the start of go one player from each team places a bee on their spoon and rushes it over to the hive without dropping it. If they drop it they must start over. The player then runs back and passes the spoon to the next player. The team that finishes first wins.

This is one of the most popular among the fairy party games. The little fairies must chase the Gnome and try and tag him/her with their fairy wands. When the Gnome is touched with the wand his/her legs freeze up, and she must throw out candy to be released from the spell. This game continues until the gnome runs out of candy.

This fairy party game is a wonderful twist on the piñata. You’ll need to have a gnome volunteer ( this should be an adult, simply because it makes it more fun). You’ll also need candy and wands.