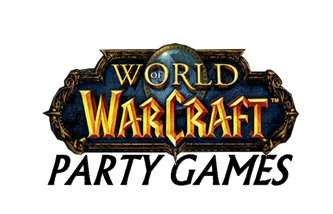 Whether your gamer is with the Alliance or the Horde, you can use the following theme to create a great World of Warcraft party. We have chosen to base it around the awesome Dark Moon Faire in the game. Since there are only so many games in that section we were left to creating some that would still pertain to the World of Warcraft theme. You can choose to use everything below or pick and choose just to help set your theme. We heard the cry for World of Warcraft party ideas, now all you have to do is let the games begin.

What would a WoW party be if you didn’t have a quest planned? So let’s begin by telling the party goers that they are all on a quest. Since we are doing Dark Moon Faire, which includes several games/quests you can create a quest chain using the games. You can give each child a Dark Moon token or gold coin once each quest is completed and have a treasure box at the end, filled with the favor bags that they can trade their coins or tokens in for. If you would like to just create one quest you can print out a list of items common to the game like swords, shields, a panda, a tiger, and then have the children find them.

One really neat thing about the World of Warcraft theme is the endless possibilities with characters. You can invite the children to attend dressed as their class or favorite character. To set the mood for the quest you can have the children design their armor using foam board and markers from your local dollar store. Once the armor is completed they can wear it throughout the party by tying it on with yarn or string.

You will need a cut out of a turtle and ten tossing rings. Have the turtle laid out on the grass or in the house on the floor a distance away from the players. Each player will step up one at a time and be given ten rings. They have to toss the rings and land at least five of them onto the turtle. If you want to make it more like the actual game then you could tie a stuffed turtle to a string a move it when they go to do their toss to make it a little more challenging. Once they have completed this "quest" they receive a token and move onto the next quest.

You will need several helium filled latex balloons on strings and something to weight them to. You will also need several air filled balloons. Spread two or three of the air filled balloons (tonks) around on the floor and Put at least two of the helium-filled (minizeps) weighted balloons around in the same area. Tell the kids that one at a time they have twenty seconds to destroy as many tonks and minizeps as they can in order to earn their token and move onto the next game. They can use any method they like to achieve their goal. The one with the most at the quickest time is the Tonk Commander.

This game is good for those nerf guns or even water guns that just sit around the house. You need to create two arrow shaped targets of different colors and one of them needs to be green. You should have someone hold the targets up and switch between the two. When the green target is up the children must try to shoot it. They have to get at least three successful shots on the green target without hitting the other target. Once this is completed they receive a token and move on. 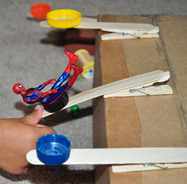 For this quest you will need to have something to launch, like large marshmallows, markers, clothespins, popsicle sticks, a hot glue gun, and a long box with something to weight it down. As shown in the picture below the party-goers are going to make their own launchers. You will need tape one side shut and place something heavy inside of the box to weight it down. Place the box on a table and tape it shut. Next glue your clothespins down, keeping them at least 6” apart. Now glue a popsicle stick to each clothespin to where it hangs off the end.

Once everything is nice a dry you are ready for launch. Draw a line that is an easy target for the children to meet. Have the children color their launching item to their liking. Have them line up and launch their items until they get past the line drawn. Once completed give them their token or coin and have them move on to the next quest.

This game is like slap jack. You will need an inflatable or toy hammer or mallet and you will need to print out pictures of a gnoll. They are easy to find using any search engine. Have them the size of playing cards. You can print out pictures of other characters as well to create your own stack of cards or mix the gnolls in with a standard pack of playing cards. You can even past them to a brown backing to make them look like barrels, which are used in the game. Keep the cards in your hand and give the player a hammer. As you steadily flip the cards, they are to whack only the gnolls with the hammer. Once they have hit four gnolls without hitting any other cards, they can receive their token and move on.

You will need to make spiders using paper bags, paint and pipe cleaners.  You will also need foam swords. Inside of every other spider put a picture of a cactus apple. Tie the bag shut and attach the pipe cleaners as legs. You can paint them vibrant colors like in the game to give some variety to your spiders. Once you have your spiders you will need to tie them to different lengths of string and hang them from something high, like a tree. Each child will have to kill the spiders with their swords until they find one with an apple inside. Once they have completed the task they receive their token and move on.

World of Warcraft Party Games
Pin the Tail on the Worgen

Print out an image of a Worgen and images of tails. Pin up the Worgen and cut out the tails. Using tacking or tape, have the kids take turns being blindfolded and trying to pin the tail on the Worgen. The closest to pin can win an extra token for a special prize at the end.

You will need a rope or hose for this classic. Have your little gamers break up into fractions of Alliance or Horde. Set a center point and have them line up on their sides and grab the rope. Now they will pull with all of their might to see who the stronger fraction is. Whichever fraction is pulled over the center line losses the war. With this game it is usually best to do a two out of three so that they have an opportunity to bring it back to their side.