KILLER AMONG US! MURDER MYSTERY 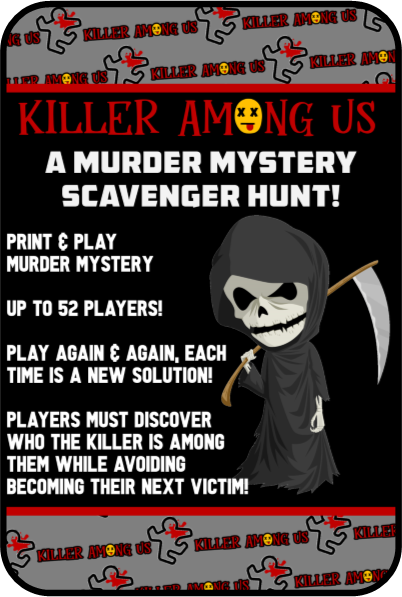 This game is unlike ANY other Murder Mystery Game out there.  Here are a few of it's unique features:

Killer Among Us is a slightly darker version of Clue for the next generation, except in this version there is no board - instead your friends (or coworkers, family, or even frenemies) get to participate in a murder mystery scavenger hunt where:

This game is NOT a scripted murder mystery game, it is an incredibly easy to learn card game that offers tons of ways for strategic players to have fun and get ahead.  The game is different every time so you can play again and again!

killer among us - a murder mystery SCAVENGER HUNT
GAME OVERVIEW

OVERVIEW: Players walk around the party area and interact (see step) with each other using game cards, some players will be killed, one player will be the killer, and the rest of the players will be trying to determine who that killer is, how they killed their victims, and what their motive is.  They do this by marking off clue cards they discover while interacting with other players.

These three type of cards (character, weapon, and motive) make up the Clue Cards in the game. The  Killers Character Card, Weapon Card, and Motive Card were removed and put into the solution envelope before the start of the game - this way any clue card discovered during the game can be marked off their Case File Sheet (a list of ALL possible characters, weapons, and motives) because it is no longer a possible solution. Also if a player is killed, their character is no longer a suspect and can be marked off the Case File.

When a player marks off all Suspects, Weapons, and Motives until they deduce each down to one possibility they are ready to solve the case and if they are right they WIN THE GAME!

Choose a new Killer, Weapon, and Motive to set-up the next game for a whole new challenge.

SAMPLE CHARACTER CARDS AND DEATH CARDS BELOW (4 of 52) 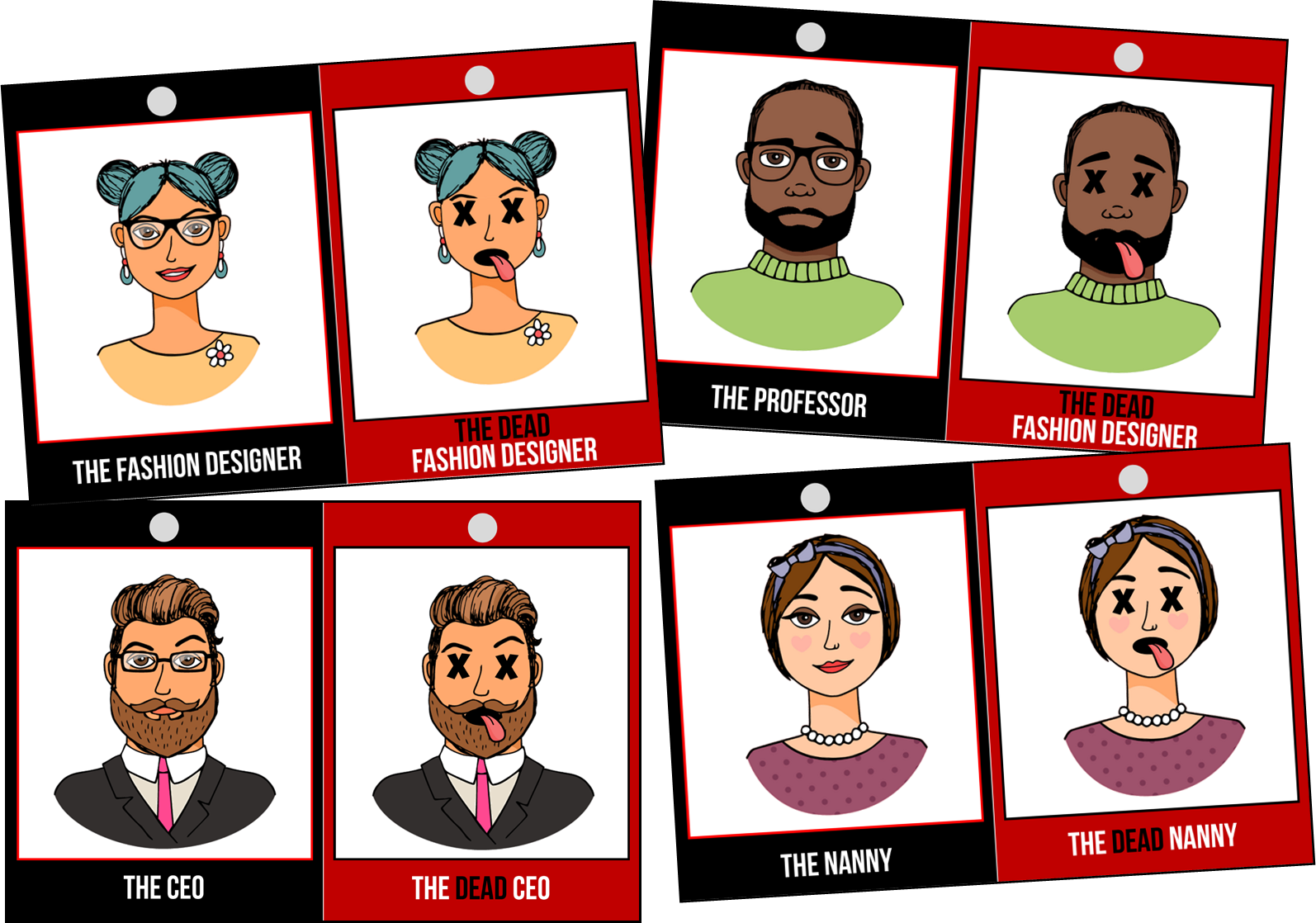 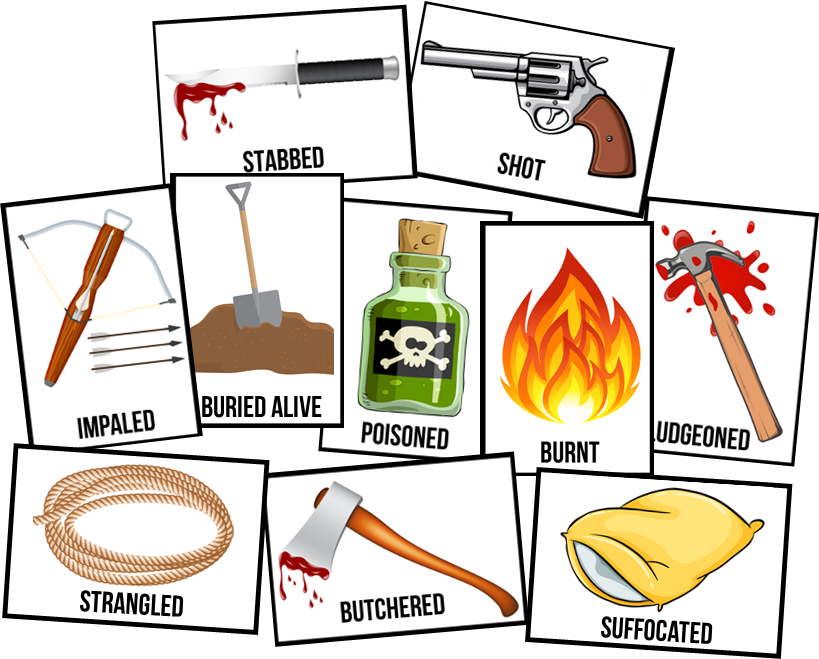 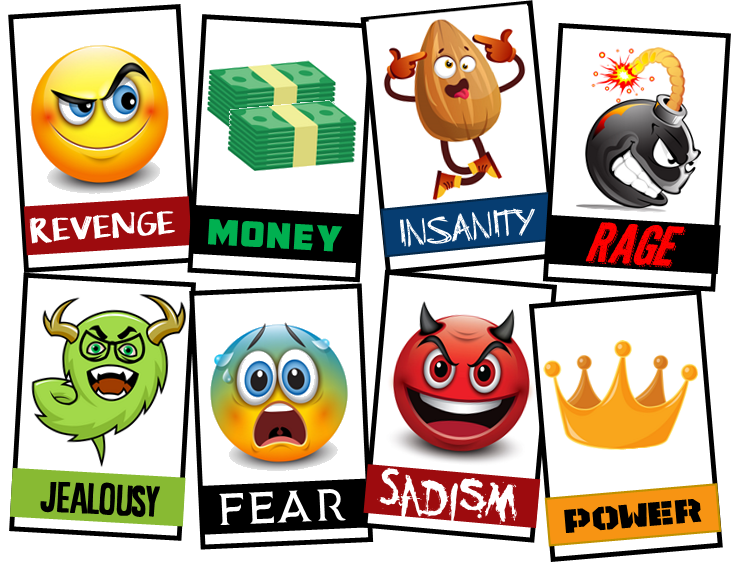 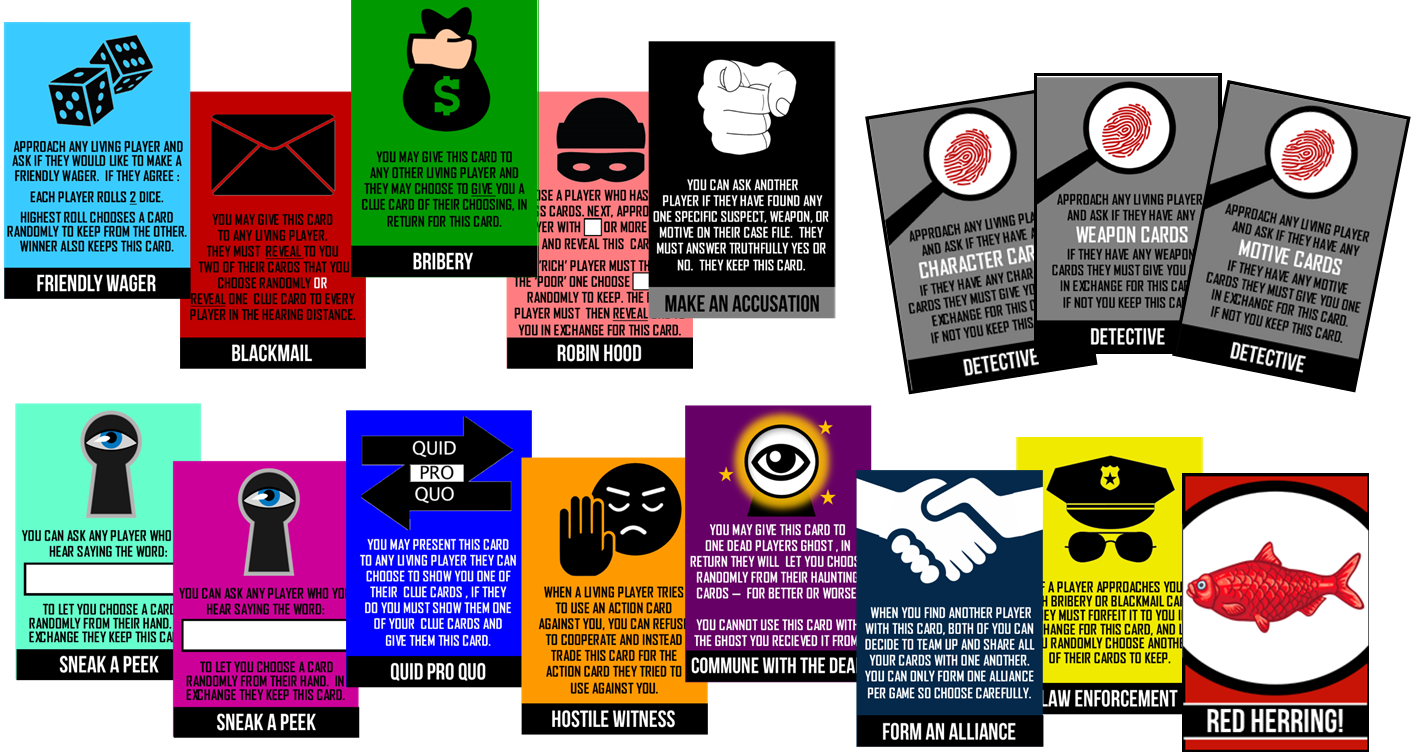 KILLER AMONG US - A MURDER MYSTERY SCAVENGER HUNT
TIME TO SOLVE A MURDER!

This game is a mingling social game, there is no taking turns, players simply walk around and interact with other players of there choosing using their Action Cards.  These are the cards that will allow players to interact differently with each other - below are just a few of the different action card rules.

BLACKMAIL: A player has to give you two of their cards or reveal one clue card to every player in the room.

BRIBERY: You can offer to give this bribery card to any player ( so that they can then use it on another player) in exchange for one of their clue cards.

FORM AN ALLIANCE:  If two players both have a FORM AN ALLIANCE card they can join forces and share information freely with each other.  Players are only permitted up to one alliance per game so choose wisely.

FRIENDLY WAGER:  This allows a player to gamble with another player if they choose.  Each player rolls two dice - the player with the highest roll gets to randomly choose a card from the other AND they get to keep the Friendly Wager card for future use.

DETECTIVE:  These cards allow you to ask players if they have a specific type of clue card in their hand (either character, weapon, or motive) and if they have any they must give you at least one in exchange for this card.

Now all you have to do is use the cards and discover the clues until you have found all you need to solve the game! But remember to....

KILLER AMONG US - A MURDER MYSTERY SCAVENGER HUNT
WATCH OUT FOR THE KILLER!

While you and the other players are trying to solve the murder, their is a killer among you and you might be their next victim.

If you interact with the killer you might receive a Red Herring card in which you walk away none the wiser, or you might be their next victim and receive a Death Card. 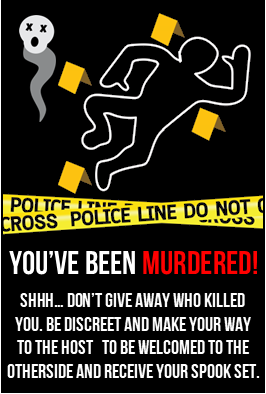 KILLER AMONG US - A MURDER MYSTERY SCAVENGER HUNT
WHAT HAPPENS IF YOU DIE!

If you receive a Death card, you are no longer able to solve the case and win the game - but you do get to continue playing! Now you are a ghost. You will receive a new set of cards called Spook cards to add to the game card you already have and you will get to look in the solution envelope to learn the details of your demise.

You cannot talk freely with the living players.  When one approaches you with a Psychic Card (the action cards that allow you to speak to ghosts) then you spread all your cards before them (the spook cards and the cards you had in your hand before you died) and they choose one.

If they choose one of your game cards they get to keep it and add it to their hand, if they choose a spook card it may or may not be a good thing for them.  Some come with consequences, some come with rewards, others are just kind of fun. 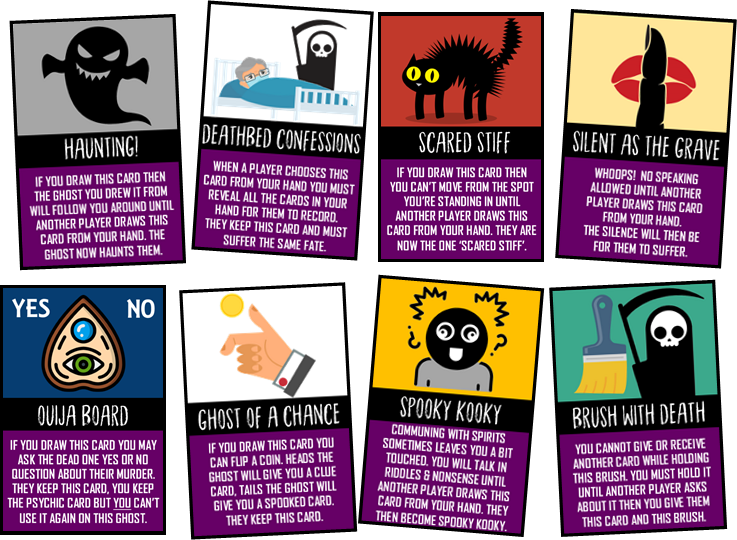 GET YOUR KILLER AMONG US GAME NOW!
INSTANT DOWNLOAD! LIMITED TIME ONLY $18.99

Killer Among Us Murder Mystery Scavenger Hunt is available for Instant Download. I recommend card stock because you can play this game again and again with different results every time. The Download includes: