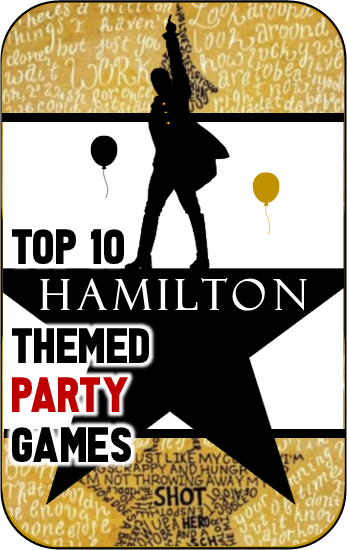 Don't throw away your shot at an amazing Hamilton party! With these fun DIY party games you'll have a party worth a standing ovation!

Hamilton has fans of all ages so we have included games for fans of different age groups - Kids, Teens, and Adults!

Know of a Hamilton theme party game we didn't include? Email HappyPartying@gmail.com and tell us about it.  If we add your game to our site we will send you a gift code for $25 worth of free printables!

I hope everyone has their 10 duel commandments memorized because it's time to duel. For this game you will need 4 people and 2 water guns/nerf guns. Now you’re going to follow the duel procedures. First have people ready to duel and allow them to each select a second. Have the seconds meet and negotiate a time and place. Grab some “pistols” (your water guns/nerf guns) make sure to have a doctor on sight ( a towel if you're using a water gun). Face back to your opponent and walk 10 paces out on the count of 3, turn and shoot your shot. 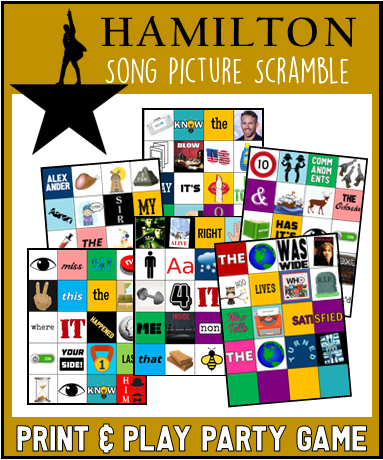 This game will be putting your song knowledge to the test. Players square off against each other to use all the game cards( which each feature a different picture or word)  to create a hamilton song. This game includes 116 pictures and images that can create a total of 35 popular hamilton songs.

This is a hamilton game of musical chairs. A game of elimination involving players, chairs, and music (Hamilton of course), with one fewer chair than players. When the music stops whichever player fails to sit on a chair is eliminated, with a chair then being removed and the process repeated until only one player remains.

This game is strictly for our 21 plus hamilton fans. For this you are going to watch the musical or listen to the songs and make a guideline of rules on when to drink. Some of the guidelines can be drink when the year is mentioned, take a shot when someone says “i'm not gonna waste my shoot”, and take a shot when hamilton writes a letter. You can use this guideline or you can add some or make all your own.

Hamilton has various characters with diverse personalities, ages, and jobs. For this game you will need a host and a list of hamilton characters and 3-5 facts on each one. These can be their birthdate, personality traits, or even jobs. Your host will name off the facts and the first person to correctly call out who it is gets a point. The person who guesses the most amount of characters correctly wins. 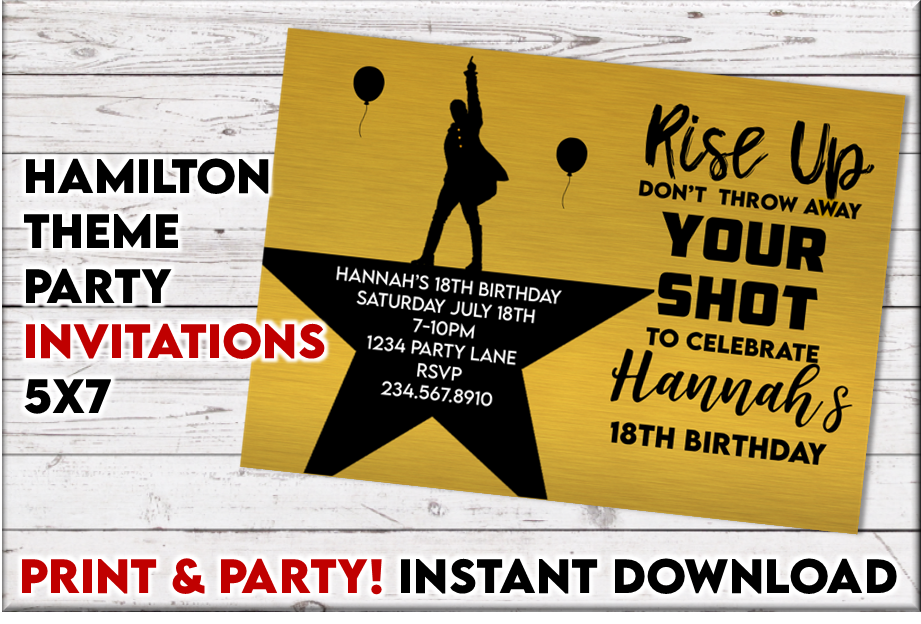 Our 5x7 printable Hamilton themed party invitation is ready to go! Download the invitation, open it in adobe reader - replace the personal details with your own by simply clicking on the default text, backspacing, and replacing it with your own. Now your ready to print and party!!

So this game will test your knowledge on Hamilton characters. For this game you will need index cards, a 30 second timer and some sort of chips, possibly poker chips or coins. So when setting up for this game you will need to write down all the Hamilton characters on index cards. Then to actually play the game each player will select an index card without flipping it over and attach it to their forehead with tape and a hair clip whatever works best for you. Then you will go player by player allowing them 30 seconds to ask yes or no questions about the family member they have once they guess they get a chip and a new card the first player to 3 chips wins.

This game will require a judge/host whoever is assigned this role will need a list of all the songs from the hamilton musical and corresponding which character sang it. You can do this yourself or we have an attached free PDF you can use. For this your host will name off a song and the first person to correctly call out who sang it gets a point. You can even say they can get one point for each person who sang in it. I suggest one guess per person per song and also a system for guesses like who raises their hand first or who rings a bell first. You are gonna go through all the songs and whoever gets the most points wins.

Hamilton is full of rapping now its time for your party guest to get into the scene. Each competitor alternates freestyling for 30 seconds in each of the two rounds (originally only 1 round when the segment first began). The rappers are not allowed to use profanities or sexually suggestive lyrics, punishable by disqualification. After the battle, the judges decide the winner, per majority vote.

hamilton party gameS & IDEAS
write like your running out of time

If you or your guest have every played the game of concentration they will catch onto this fast. For this game you will chose a category correosopending with hamilton and each player will need pen and paper. You will give the players 1 minute and in the minute the players will write as many things in that category down. After the minute you will go player by player and they will share what they have if anyone has the same one every one must cross it off their list the player at the with the most category correct words wins.

So I was wrapping up this page when I came across this little gem. At first I just watched out of curiosity, but then I was like - I gotta have this cake! So take your shot at this amazing Hamilton cake.