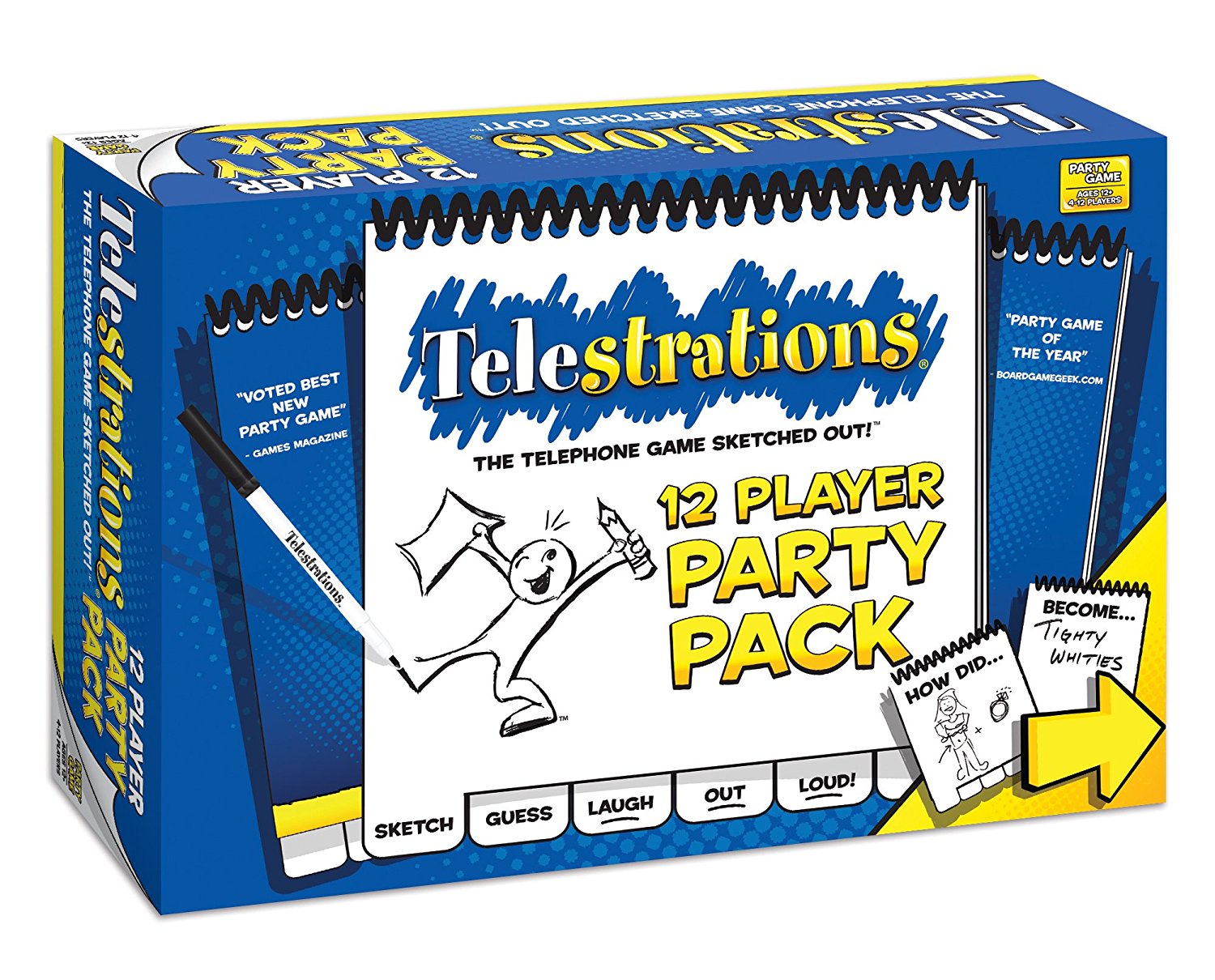 The "Telephone Game" Turned Into The #1 LOL Family & Party Game!

Draw what you see then guess what you saw for hilarious and unpredictable outcomes. It’s miscommunication at its best!

Object of the game? To laugh - A lot!

Telestrations is perfect for family parties, fun with friends or entertaining a crowd.

Telestrations is the visual version of the classic “telephone game” where you draw what you see, then guess what you saw to reveal hilarious outcomes!

Here's How To Play

Each player starts with their own erasable sketch book, marker and word card. A roll of the die determines each player’s secret word. The timer gets turned and everyone draws their word. After 60 seconds, everyone passes their book to the player on their left. Then each player takes a few seconds to guess in words(s) what they see, and passes again. The timer is turned and everyone draws the guess.This continues until everyone’s sketch book passes by every player and returns back to its original owner, where it’s time for The Big Reveal. Everyone shares their book and the hilarious miscommunication is revealed. Just like the game of “telephone,” the outcomes are unpredictable and the laughter is contagious!

This is by far the most popular party game when we have a game night. We have the 8 player version, but so many people enjoy playing it, we decided to get the 12 player version. The premise is that you have a word that you have to draw in a book, you then pass the book to the player next to you. He or she then writes down what they think the word is based on your drawing, and then passes the book to the next player. That player looks at the word that was just written and then draws it, passes, and so on.

For example, let's say your word was "ocean." So you draw a body of water with fish in it and then pass the book. That person looks at just the picture and then tries to guess what word you were drawing. They think the word must have been fish so they write "fish" in the book and then passes the book. The next person sees the word "fish" and draws a fish, and passes the book. They next person looks at the fish, but thinks it looks like a shark so he thinks the word must have been shark and then writes "shark" and passes. Etc..etc..

Basically, it is a "telephone" version of Pictionary. The hilarity comes at the end when everyone has passed all of the books around. The goal is that the original word that a player started with is the last word in the book, but this is rarely the case. Instead, what happens is that you go through the book and look at the words/pictures and laugh when someone couldn't figure out a word or how terrible a drawing is. Because you're under a time crunch, some pictures get very funny.

This game is hilarious and fun! No one sounded too excited about it when I was explaining how to play, but once we got started we didn't want to stop! We stayed up past midnight two nights over a holiday weekend because no one wanted to put this game down! It is simple to play and doesn't have any complex rules so within a minute of opening it you can be playing.  My husband isn't a big fan of games because he gets really competitive, but he was able to relax and enjoy this game. No artistic ability required - one of our players was an art student but most of us struggle with stick figures and it only made it more interesting! I took the advice of other reviewers and got the 12 player pack and I'm glad I did. Once others see how much fun the game is, they want to join in too. It wouldn't be easy to alter a smaller version to work for more players as each dry-erase booklet has a set number of pages depending on which size pack you get. Buy this game, you won't be disappointed!!

I'm an ESL instructor and finding games that are both easy to understand and fun for college-age students can be difficult. This ended up being a hit with my class, and it was something we could all participate in (one teacher + 10 students). Some of the prompts on the cards were beyond their understanding but usually after one or two card swaps they would find something they could sketch. The outcomes at the end were probably the best part - the students had to go through each page of their sketchbook and explain where things went wrong and it was all around hilarious to everyone what kind of misunderstandings had occurred. This game is a ton of fun and with rules that only take a short time to explain, it can easily be played in place of the more traditional game of telephone that students' accents and pronunciation skills can often complicate to the point of making the game deteriorate halfway through.

If you have never heard or played this game BUY IT NOW! This is the best game I have ever played and yes even better then cards against humanity. My mom brought this out at one of our family dinners and we couldn't stop playing it. It so funny to see what your word turns into after it goes around the table. The next day I order it, I got the 12 player instead of the 4-8 player she has.