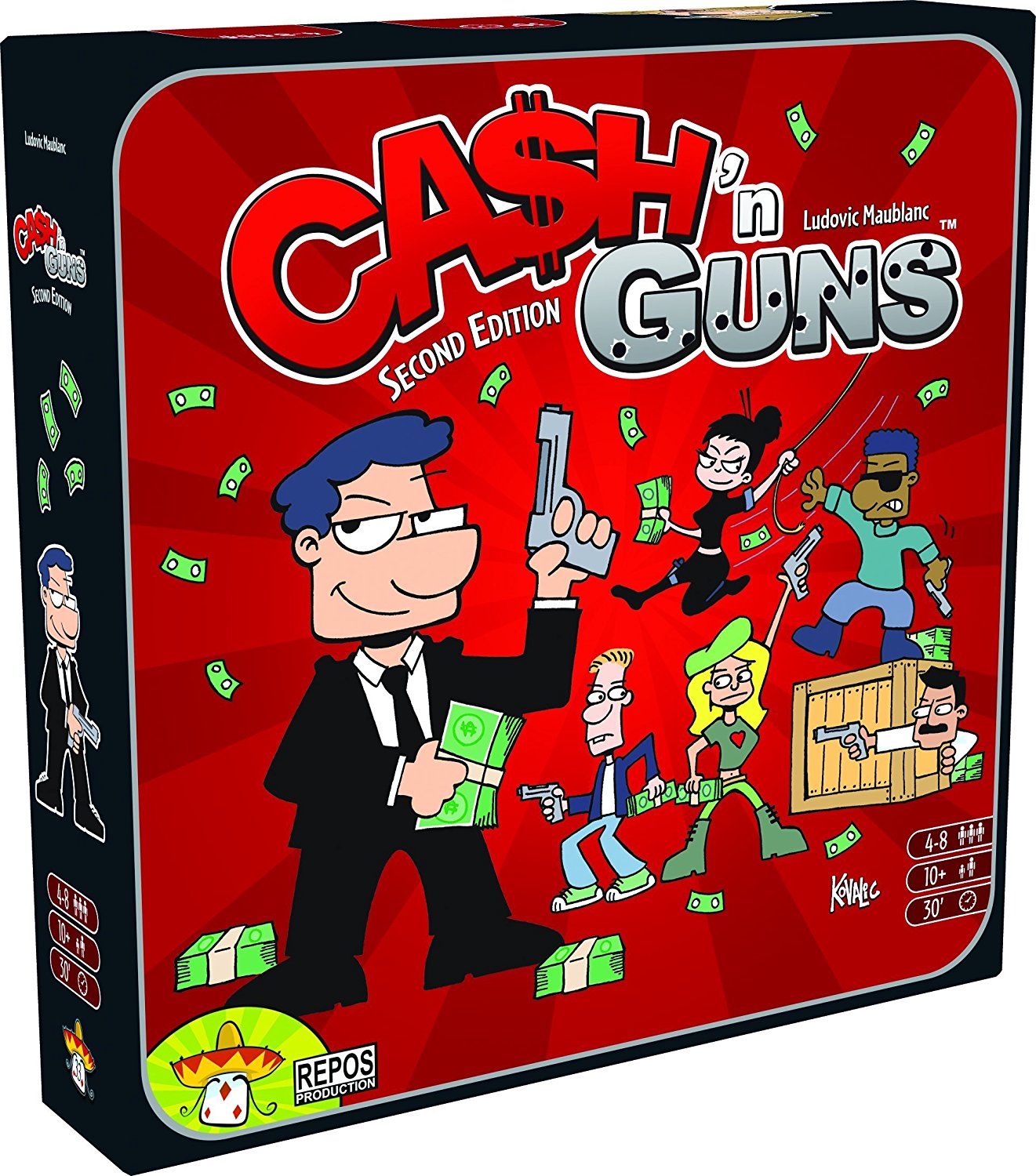 The big heist may have been a success, but it all goes wrong when every crook wants a bigger cut. With this much money on the table, bullets speak louder than words! In Cash 'n Guns, players will point foam pistols at each other and try to intimidate their opponents into letting them have the largest share. The bravest crooks enjoy the most money - but only if they live long enough to spend it!

The game involves a set amount of rounds where you point Orange tipped foam guns at fellow players fighting over the loot set before you, but is it a bullet in the chamber? Or a a blank?

The quality of the cards and foam guns are great. There fun cartoon art on the characters.

This is a great party game. It plays 4 to 8 players, thought it's best with 5+. Gameplay is generally less than an hour (usually around 30 minutes). In short, it is a bluffing game where the objective is to get the most cash while staying alive - and you get foam guns!

It plays over eight rounds. In every round, a pile of loot (cash, art, diamonds) is put out in the center. Everyone has a stack of eight bullets - but only three are live, the other five are blanks. You'll use one each round, but people won't know what you're firing. Simultaneously, every player is going to point their guns at each other - then anyone has a chance to hide (get no loot, but no chance of being shot) - then anyone still up reveals what bullet they fired. Anyone shot by a 'live' bullet takes a wound and gets no loot, blanks do nothing. Three wounds and you're permanently dead. Normally I hate player elimination, but the game is so short that it does not detract from the game!

Anyone still standing distributes the look amongst themselves, then the next round begins.

That's the general rules - there are some minor tweaks, but that's generally how the game plays.

The fun comes in the bluffing and arguing. There is a lot of strategy in when to use your real bullets as opposed to your blanks, as well as when to hide as opposed to running the risk of being shot. The quality of the components is excellent (and, come on - you're pointing foam guns at each other!) and the art is cute. There are also "role" cards you can hand out that gives everyone a unique power, if you like.

All in all, it's a great party game that is always chaotic fun.

We love this game! Great for game night when we have lots of people! They even sell an expansion now that adds more people.

We just love using the foam guns to point at each other. It's hilarious. I've even seen my aunts and grandpa gets some good laughs out of this game when they gets a few guns pointed at them. Great all around fun for anyone!!

I really enjoy playing Cash N Guns. I've only played with 6+ people so I don't know how it fares with smaller sizes, but in larger groups it is an absolute blast.

Everyone has foam guns and treasure/loot is put out into the middle of the table. After a countdown, there's absolute chaos as everyone pulls their gun out towards someone of their choice (this isn't a game for those easily offended or those who don't find humor in pointing a gun at their significant other/being held at gun point BY their significant other, etc). There's another countdown where people can decide to drop out of the round if they feel threatened by someone pointing a gun at them, since you don't know if they have a bullet or a blank, and if you take 3 shots you're dead. This leads to a lot of humorous situations and bluffs.

The game is easy to learn and takes less than an hour. Lots of fun for those that enjoy bluffing and feeling like you're in some sort of heist/reservoir dogs-esque scenario.

Fun party game powers add a great wrinkle to an already fun game. It's like Quentin Tarantino made a board game. I would recommend this to casual and hardcore gamers. 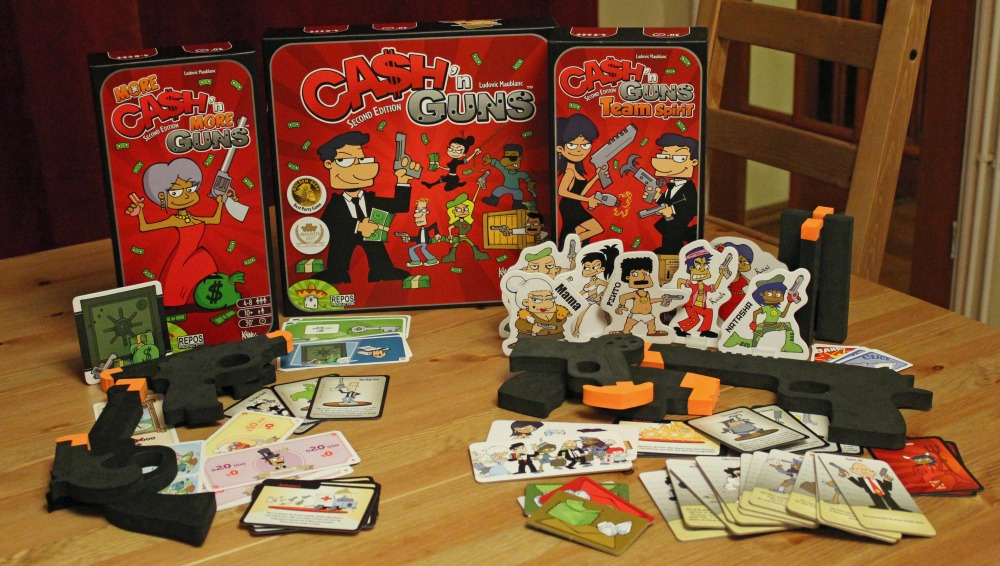