Check out my list of pirate games. I’m sure you’ll find the pirate party ideas that will be perfect for your kids pirate party. I have ideas for the creative D.I.Y moms and dads, and those looking for easy and simple games.

Just browse through my list to find the pirate party games that will put the ARRR in your PARRR-TY. 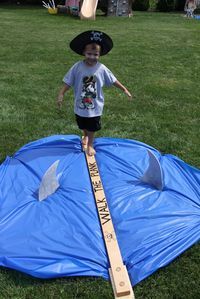 For younger children a simple task to walk across the plank without losing balance is a fun challenge.

For this pirate game you will need a plank which you can make yourself with a long board. You don’t need to have it far off the ground (you don’t want any injuries) but you can prop it off the ground a little with milk crates, old tires, etc. Just make sure it is sturdy enough for the kids to stand on without wobbling.  If you're feeling really festive you can create an sea-worthy atmosphere around it like in the picture.

For the older kids who need a bit more of a challenge you can include the element of a pirate duel. Any self-respecting pirate will know how to wield a sword, especially in desperate situations. Two pirate participants, armed with swords, step onto the plank and duel while maintaining their balance. The person to stay on the longest is the winner, and the next two pirates take their turns.

You can make your own swords from those long balloons used for balloon animals, pool noodles, or purchase fun inflatable theme swords, 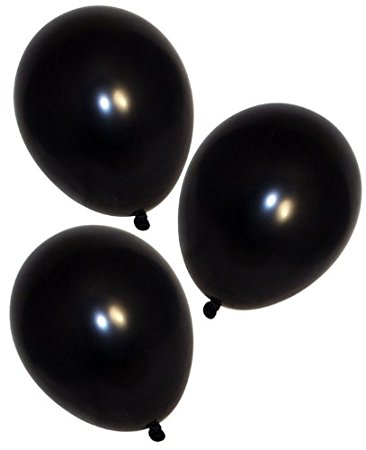 A black balloon is tied to a string and the other end of the string is clipped or tied around the pirates leg. When the whistle blow it’s every man for themselves as players try to pop the other players cannons while at the same time trying not to get their balloon popped. They must do this without using their hands. The player whose cannon ball last the longest wins! 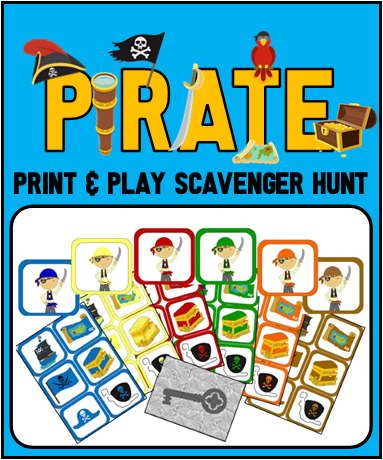 This first pirate hunt is perfect for the young children who haven't mastered reading yet.  It is a scavenger hunt that instead of words, uses pictures.  Players race to collect the pirate gear that matches the color of their pirate and then they work together to discover where the treasure is. 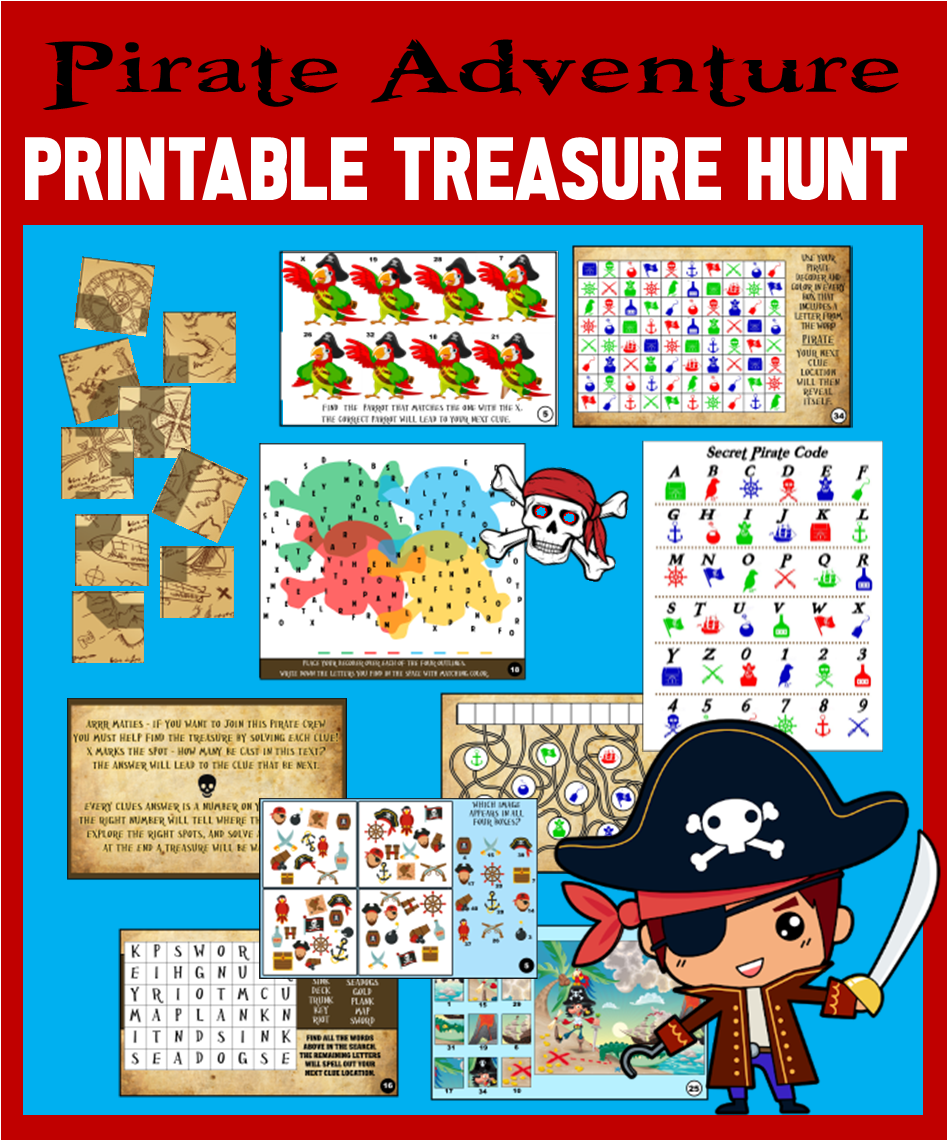 My second pirate treasure hunt game includes 10 clues that each feature a different challenge -such as puzzles, game, word search, maze, etc.  Each clues answer will lead to where the next clue is hidden until the last clue leads to the treasure.

The great part about this hunt is that you can play it anywhere because YOU decide the hiding location. 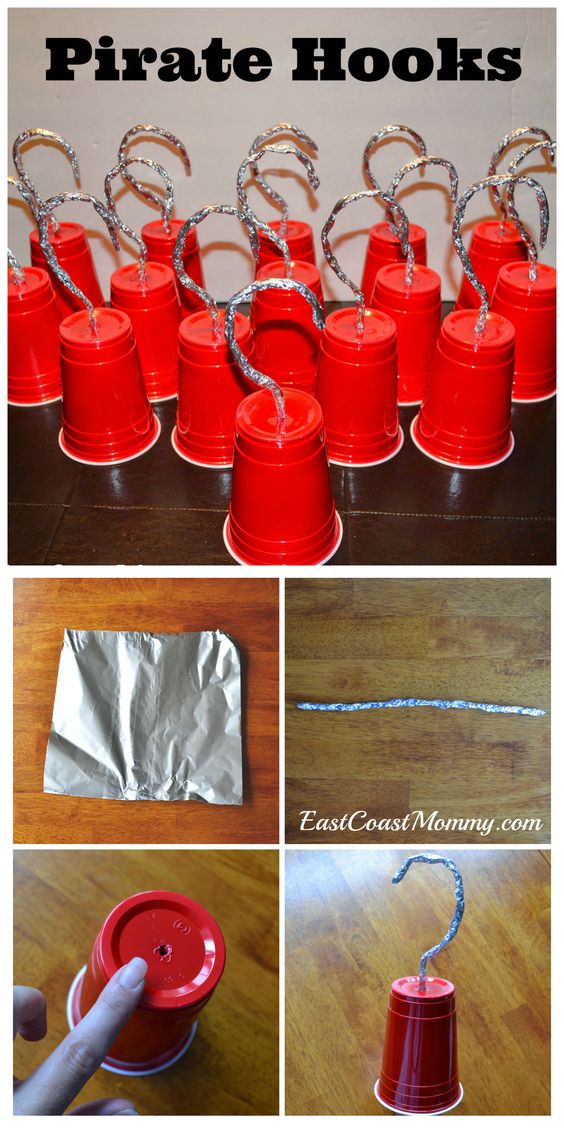 In this action packed game the pirates are divided into teams. One member from each team races against the clock to get pick up as much treasure as they can and rush it back to their teams treasure chest. After all the pirates have had their turn the team with the most treasure wins!

For this kids pirate party game you’ll need hooks. I found this easy as pie DIY pirate hook tutorial on EastCoastMommy.com - check it out.

To create the treasure cove you can use a small kiddie pool, a large bucket, or you can just spread the treasure out over a rug. For treasure simply use plastic bead necklaces and rings (anything “hookable”). You can find these at your local dollar store or order them below. For treasure chest us plastic containers of any kind. You don’t need anything fancy. If you want you can decorate them with fun pirate symbols.

Race to rescue all the men from Davey Jones locker by fishing them out of the sea. Each pirate is given a fishing pole. They race to fish out all the men from the sea. The sea can be a small kiddie pool is filled with shells, sharks, ships, and the pirates that have fallen overboard or it can be as simple as spreading the men over a blue sheet of tissue paper.

Make the fishing hooks by purchasing a set of magnets with the sticky glue on the back. I found mine in Wal-Marts craft section for $1.97. Connect magnets to a ribbon or string. I used toy diamond ring party favors I found at the dollar tree and stuck the magnet to the top and tied the ribbon around the ring. Then I tied the other end of the ribbon to a short dowel stick, which I found a set of 16 for $1 next to the magnets at Wal-Mart.

For men you can simply use plastic army men purchased at the dollar store. The kids really don’t care, their imaginations are usually much better than ours ; ). If you want the real deal, I got the pirate figures shown in the picture for less than $700 for a dozen (the image is a link) Then all you need to do is clip a paperclip around each figures foot. Voila! They are ready to be fished out.

These types of pirate party games can be played individually, in teams, or as a non-competitive game. 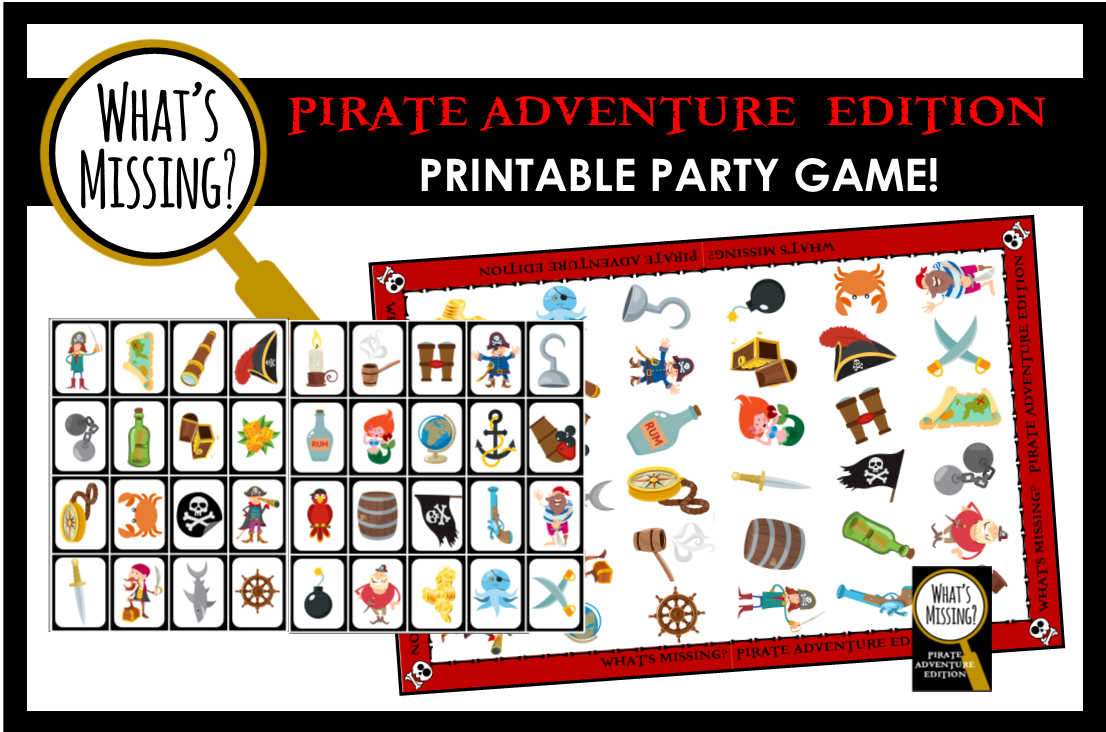 This game is great for players ages 5+. 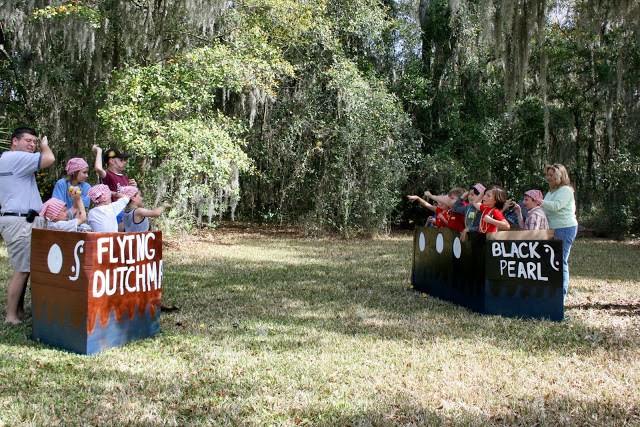 The pirates divide into teams and take their place behind their team’s pirate ship. Each team is given a set of cannon balls and when the whistle blows they try and get as many of their cannon balls through to the other teams ship. The team that has the least amount of balls in there ship when the whistle blows again wins. Play a couple rounds of this and then award all participants with a small prize.

I can't take credit for this idea, I was inspired by this awesome blog.  You should definitely check it out because this was not the only worthy pirate party game. My favorite was Pirate Pete Says - where the kids learn fun pirate actions to do when they hear specific prompts during a story.  It was a huge hit, but you'll need to check out the blog for complete details.

For cannonballs use plastic ball pit balls or for a more budget friendly option simply use crumpled up balls of newspaper. I would make about 40-50 of them.

For ship you can create your own, or even better let the kids make them out of empty cardboard boxes. If they are younger you may need to help with the construction but you can let them decorate with markers and stickers. Use an old pillowcase and let each pirate team create their own flag.

To play space the ships out about 10-15 ft apart in the yard or party space. Create a line a few feet in front of each ship. Cannons can only be thrown from behind your teams line, but the little pirates are allowed to cross into the middle to retrieve cannons. Play four or five rounds lasting about 3 minutes each. 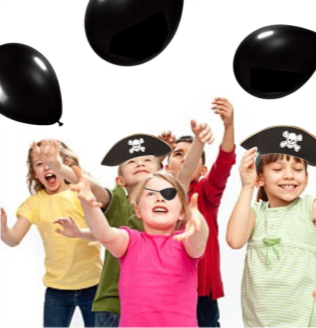 This is one of my most popular kids pirate party ideas. In this game the little Pirates must try and keep the cannons in the air (black balloons) while the music is playing. When the music stops each pirate must grab a cannon.

You draw the name of one of the pirate kids and that child must pop their balloon and complete the pirate challenge inside to win a prize. Start the music again and keep playing until every pirate has won a prize.

- Twice as many black balloons than participants. Start with a balloon for each guest then add a balloon after every round to keep it even. This makes sure everyone gets to continue to play and that the persons whose name you call will have a balloon.

- Before inflating balloons place a slip of paper with challenge written on it inside. For my free list of fun challenges click here.

- You can use any kind of music for this game. But consider purchasing an awesome pirate party songs CD to add to the theme. This will also be great mood setter for all your party pirate games and activities.

KIDS PIRATE PARTY GAMES
pin the patch on the pirate 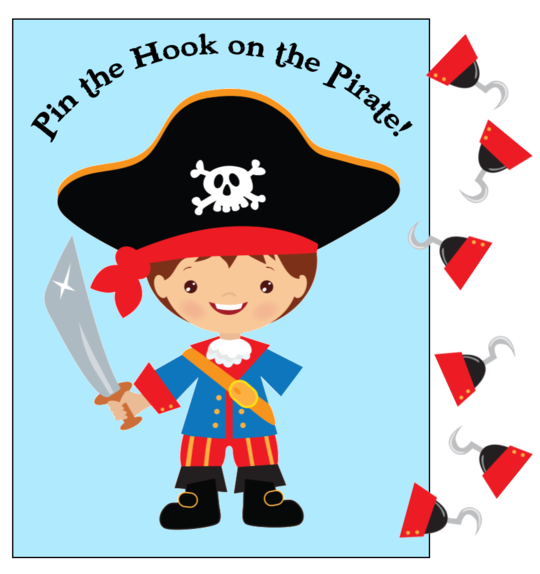 This Pin the Hook on the Pirate game was created as part of our Pirate Adventure theme party games.  It’s played just like pin the tail on the donkey, except instead of a picture of a donkey there is an image of a pirate child and instead of tails for pinning there are cute little hook hands.

This game comes in a ready to print PDF file.  It prints on standard 8x11 printing paper to make it perfect for printing out at home. 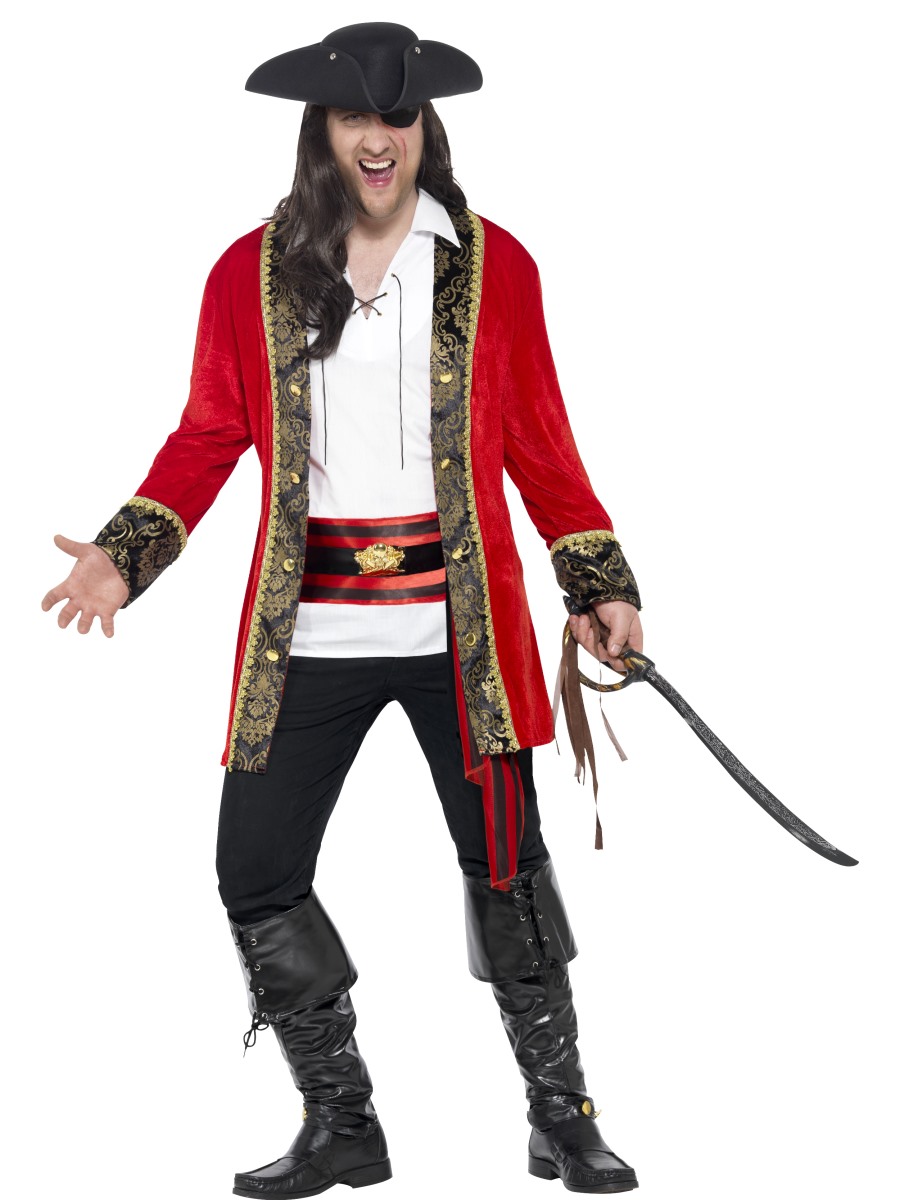 This is another best of the best pirate games,in my opinion, kids pirate party ideas for games. It needs to be played outdoors or in a large indoor space. The little pirates are all given swords (either foam or inflatable) and they must race to capture the captain. Every time the Captain is touched with the sword he must stand in spot until he gives away some of his booty ( candy) to be released. The game is played until the Captain runs out of candy. This game is also known as the human piñata.

The captain can be played by you or you can enlist another fun spirited adult to help (for a bonus have them dress up a little). Kids love chasing adults around, this pirate party game is always a hit. You just need a foam sword for each guest and a bag of piñata candy. 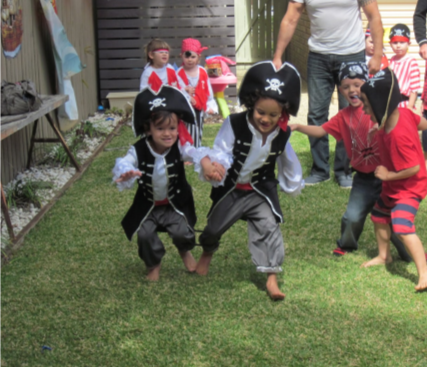 Need more kids pirate party ideas and games? How about a pirate relay race? Pirates are divided into pairs of two. One of each of their ankles are tied together to form the peg leg.  The game is played just like a three legged race.  Players must learn to cooperate with each other to make it to the end.  The first team to cross the finish line wins! 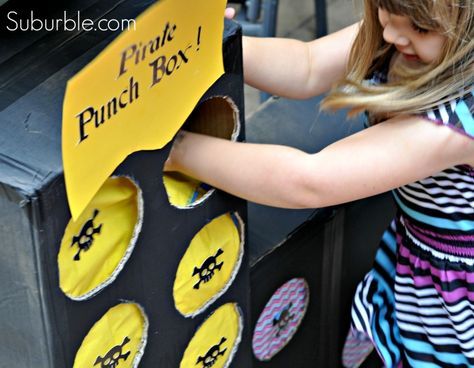 Suburble.com has an excellent tutorial for how to make a pirate punch board.  These boards are so popular right now.  Boxes with small holes cut out of them, each hole containing a small prize, are covered with tissue paper which kids must punch out to obtain.