Does your little soldier want a real superhero party? Well look no further. An army party is at hand. This is one of several themes where using solid colors is very acceptable and cost effective, leaving time for you to work on the favors and games. Our printable army party supplies for this theme are set to impress. Not only can you personalize them, but they allow you to work in an assortment of colors, no more going back and forth trying to match that specific pattern you purchased. We are creatively at your beck and call. Add some of our DIY army party games below to add that boom to this explosive theme. 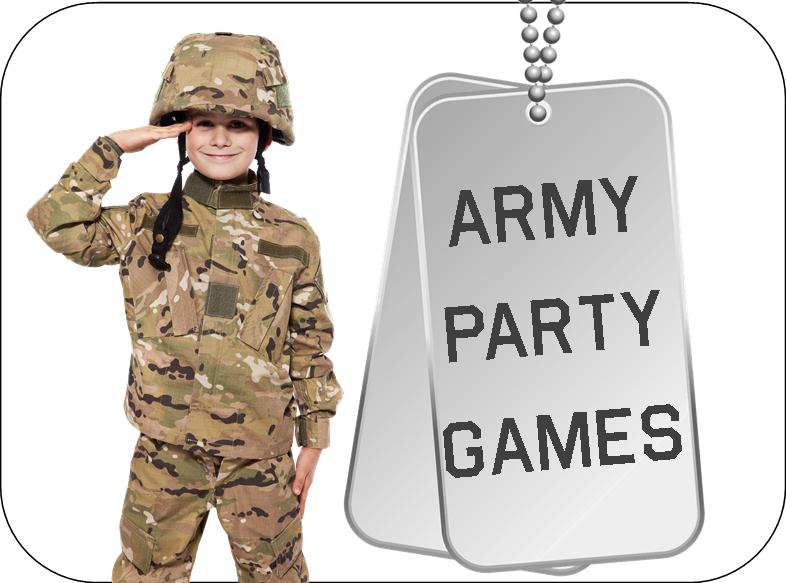 Have all your little recruits get ready for the army party by completing basic training. You can section off certain areas for each obstacle. For one area, set up cones and have the kids balance an egg on a spoon while weaving through the cones. Another area can be completing ten each of jumping jacks and push-ups. For another area you can put six to eight stakes in the ground and tying yarn the first two stakes and weaving it like a shoe lace. The children will have to do what is similar to hopscotch to get it completed. If you have old tires, they work as well. You can also draw a straight line with chalk and this will act as a balance beam. They have to walk it without stepping off, or else they have to start over.

Face painting at the beginning of the party helps the kids get in the army mood. Have colors like brown, green and black available for each child. They can paint their own faces or each other’s.

This game will have your soldiers earning their rank in the army. Each child must complete a certain amount of tasks to rank up. Tasks can be as simple as making three balls into a basket, then completing ten push-ups, answering five questions about their country correctly, identifying which vehicle/plane belongs to which branch of the army…etc. You can use this as an opportunity to hand out dog tags.

Same concept as hot potato except you are using a grenade, fake of course. You can purchase a novelty grenade or use a green balloon filled with water or sand. Have the children gather in a circle. Begin playing the music of your choice and have them begin to pass the Grenade around the circle. Periodically stop the music and whoever is holding the grenade is out. You continue this until one is left and they are the winner.

This can be played indoors or outdoors. Separate the children into two groups. Choose two from each group to be the wounded soldiers. Have the wounded go to the opposite side of the room/yard. On go, the remaining soldiers will rush to the injured and wrap them in a crepe paper or toilet paper. Once wrapped, they will put them on a beach towel and carried, as a team, to safety. Once this is completed they will do the same with the other wounded soldier. The first team to complete is the winner. Maybe give medals of honor or ribbons to the heroes.

You will need a bag of army men and two different colored flags. Paint the bottom of half the army men one of the colors of the flags and the other half the other color. Now hide the men and hang the flags on opposite sides of the room from somewhere high but not unreachable. For example, a doorway or stair rail. You will divide the children into two companies (teams). Have the kids name their company and choose their color of flag. They have to locate each one of the prisoners being held captive by the other team. After locating every soldier, they now have to capture their flag. First to complete, wins.

Inflate two different colors of balloons and have a timer set for three minutes. Have the soldiers get into their companies and assign them a color. The object of the game is to pop the other teams balloons as fast as possible and without using your hands. Whichever team pops the most wins.

Purpose of this game is to guide your blinded soldier through a minefield while the enemy works against you. You can use anything you like to act as the mines, beanbags and rocks work well. Set up two teams, they will be taking turns. One child, from either team, is to be blindfolded. Spin them in a circle three times, the last time around leave them facing the minefield. Now their team has to shout directions to make it through without blowing them up. At the same time, the other team is shouting incorrect directions to throw them off course. The team with the most survivors win.

Military Party Games
Pin the Medal on the Soldier

You will need to print an image of a soldier, a blindfold and some medal cutouts. Have the children take turns being blindfolded and trying to place the medal on the soldier. Winner gets a price.

Towards the end of the party have the kids work together to decode a message. It can say something like, ‘Time For Cake Soldiers’ or whatever you like. You can do it hangman style or use numbers for letters.