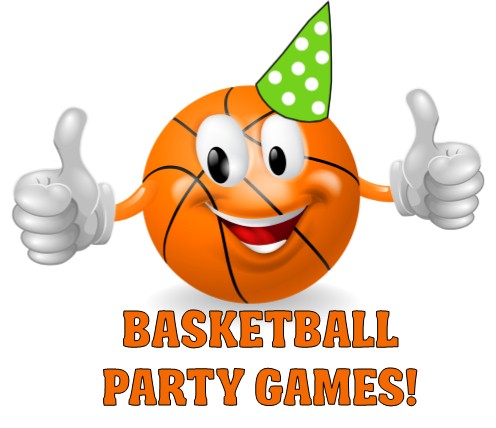 These basketball party games and ideas are sure to make throwing your child a Basketball Birthday a SLAM DUNK!

The games are broken down into 2 sections : Warm-ups (high energy, outdoor games) and Cool -Downs (calmer indoor games perfect for while waiting for guests to arrive, or calming kids before they go home).

Always start with the Stretch:This seems simple but is very important. Make sure kids Stretch properly before any physical exercise. You can make this fun by calling stretches in a Simon Says game or "Coach Says". Examples include "Coach says touch your toes" or "Lunge Left". (Remember, only stretch when Coach Says)

Line 4 players up spaced about five steps apart. The last player must pass to the first without the middles getting the ball. Players may lean to the side but may not leave their spot. If the first gets it, he then must bounce it back to the last. If a center catches it, they switch places with whoever passed it. Play several rounds so everyone gets a turn.

A classic and often hilarious game for players of all skill levels. The rules are simple and any number of players may participate. One person calls a shot challenge and then attempts it. If the shot is successful, players must duplicate it until someone misses or all players have done it. If a player misses, he takes a letter  and then the next player may call any shot they wish. Players may miss up to five times (H-O-R-S-E) before they are out. The last one to spell horse wins. Some fun trick shots include the hook shot, the "Granny" shot and the dreaded" bounced basket"!

BASKETBALL PARTY GAMES
Free for all

Free throw challenge. Each player takes position at the free throw line - a spot directly in front of the basket and about 12 - 15 feet from the hoop (depending on the age of players). That players then gets a shoot-out (shoot till you miss). Let each person takes a turn and crown a Shot Champ for the most shots in a row.

Set up a row of cones and challenge players to weave through while dribbling as fast as they can. Any dropped balls or traveling.

Challenge your sports stars to a simple footrace. You can run this as a short distance race or a "Suicide" relay. Use chalk or white spray paint to mark out several court lines. Place flags for each child at three different lines and a basket at the start. Kids must collect the flags one at a time, running to the nearest first and racing it back to the basket before going after the next and the next and so on. The first to get all their flags in the basket wins.

Players pair off with 1 ball per pair. They start by facing each other about five steps apart. Player 1 bounces the ball to his partner, then player to bounces back (single bounce only). If both passes were successful players each take a step back and try again. With teams lined up side by side it will be easy to see who is the most successful pass team.

For this one you'll need bouncy balls of different sizes and perhaps a fast player to chase down rebounds. Each player will start with a basketball at the free throw line. If they make it, they are given a smaller ball (a kickball or playground ball perhaps). If that shot is successful they get a still smaller ball and so on until they miss, and play goes to the next player. Balls can include half-size basket balls, tennis balls, mini-beach balls, gumball machine rubber balls and even ping pong balls!

This is like double- elimination musical chairs. Start with enough balls for every player but one. Line the balls up at the free throw line. Players stand in a row about ten steps away facing AWAY from the balls. At the whistle, players turn and run to get a ball. The one who doesn't is out. Players must then take a shot at the basket. Successful shooters return to the waiting line while those who miss are ALSO out. When everyone has taken their shot, set out the right number of balls (1 less than remaining players) and blow the whistle. Play continues until only 1 remains.

Match the names of these famous Mascots to their team. Write a list of teams on one side of a paper and a list of mascots (IN RANDOM ORDER) across from them. Kids can solve individually OR you can draw lines on a dry erase board and list ten teams down one side. Cut the names of mascots and place in a hat to be drawn at random. As each name is drawn, One player must write the name on the matching team line. A sample list of teams and mascots can be found below. 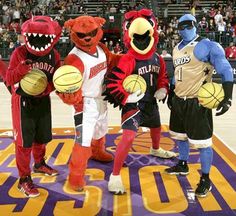 Draw several 5 x 5 grids. Fill cards with names of the greatest players of all time, adding a basketball sticker to the center for a free space. Use chips or orange Reese's Pieces as markers. Write the names on strips of paper and draw from a hat one at a time until someone yells "Score"!

Put permanent markers beside one ball so guests can write messages and Happy Birthday notes to the guest of honor. This creates a fun and memorable keepsake.