Our Top 10 boys sleepover party games are guaranteed to take away the stress of trying to come up with ways to entertain a bunch of boys, and provide a night full of fun and memories.

Don't forget to check out our collection of Boy Sleepover Invitations!  We have a great selection of editable invitations that make it so easy to get the word out about your party.  These sleepover invitations come in an INSTANT DOWNLOAD - all you have to do is open in adobe reader, type in your party details, and print!

Nerf guns will never go out of style. Invite guest to bring their own nerf guns to the party, but have extra just in case some of the boys don't have one.

You can let the boys play free style and/or set up different nerf gun games and challenges for them to try their skills at. 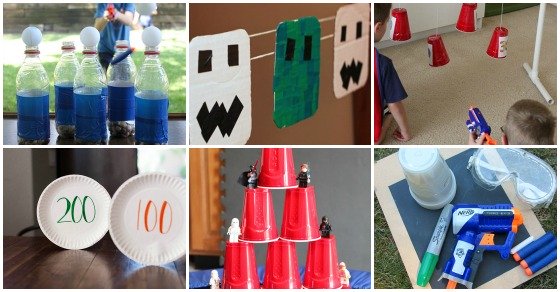 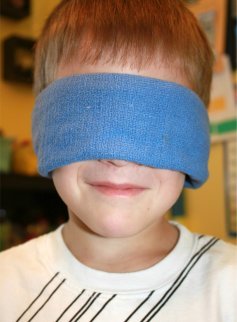 Some may know this as the game they played in the movie The Conjuring, but this game is a favorite in my house.

One player is blindfolded and must count to 20.  Some rules say they must spin around 10 times, but we prefer counting.

While he is counting the other players must go hide.  Once the counting is over they must keep at least one foot planted in their hiding place until they are found.

The blindfolded player must listen and feel around to find the other players.  They can call out CLAP, and all hiders must do two loud claps to give them a clue - but CLAP can only be called three times.

Last player found wins, the first player that is found is next to be the finder.

You can create your obstacles out of whatever you would like, there are tons of ideas for creating obstacles.  Here is my favorite set of obstacles for the Ninja Run Course.

1. Boys make it through the 'laser' field.  This obstacle is best created in a hallway where two walls are close to each other.  Pin string or streamer (lasers) from one wall to the next in different directions.  Players must maneuver through the area without touching any of the 'lasers'.  Some attach small bells to each laser to alert to movement.

2. Next players enter an area where they must punch or kick all the enemy ninja's before escaping to the next challenge.  The 'enemy ninja's' are balloons with ninja mask on hanging on a string from the ceiling or helium filled and tied to string and anchored to the floor.

3. Next players must make it across a path of lego's barefoot to the finish line. 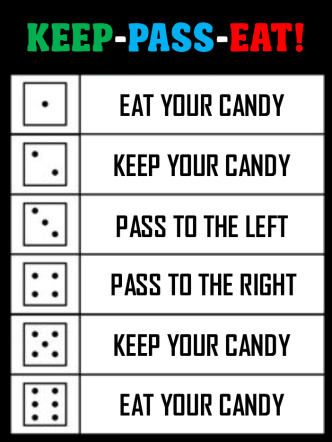 You will need a die and some small wrapped pieces of candy for this game.  I like to use mini reese cups or starburst.

1. Each player gets three pieces of candy.

3. Players continue to roll and follow the rules of the die until only one piece of candy is left that player WINS!

If a player ends up with no candy they should stay in the game because another player might end up passing them a piece and then they will be back in the game! 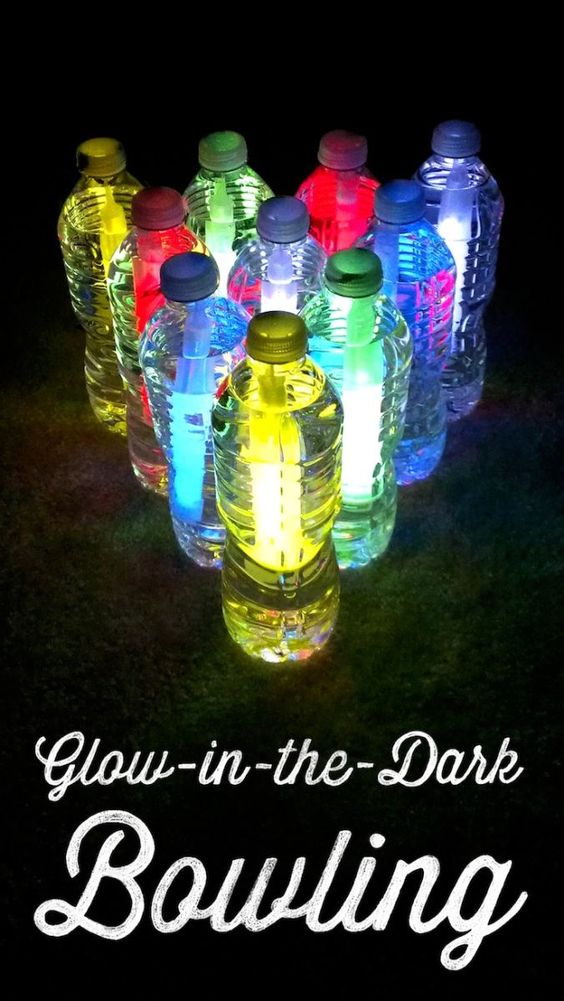 This game can be played indoors or out. You will need 10 water bottles, 11 glow sticks, and a hamster ball.

1.Fill plastic water bottles nearly to the top, then add glow sticks, and seal them up tight.

2. Open the hamster ball and put a glow stick inside, you could instead use glow necklaces. Close the ball back up tight.

3.Arrange the bottles in bowling pin formation, and let the kids take turns knocking pins over in the dark. 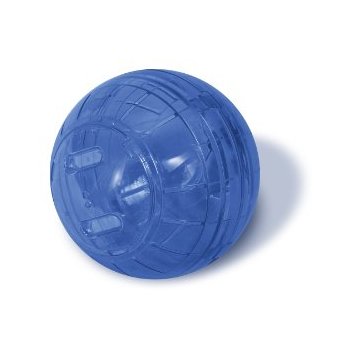 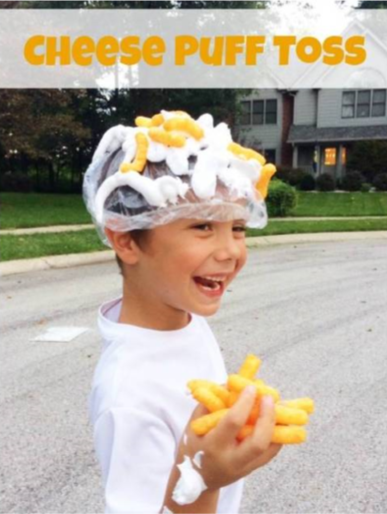 This game was inspired by an idea I found on bedtimemath.org.  Players have a blast trying to toss their cheese puffs and get them to stick on their teammates shaving cream covered head!  You will need a bag of cheese puffs for each team, a disposable plastic hair cover for each player, and a couple of cans of foaming shaving cream.

2. One member from each team put on the plastic hair cover.

3. spray shaving cream all over each hair cap.

4. Have the players without hair caps to stand at a marked line about 7-10 ft from their team mate. Arm them with half a bag of cheese puffs.

5. On the start of go give players 2 minutes to land as many puffs as they can on their partners head.

6. Record how many each team got and then have players switch places and repeat.

Looking for something exciting that will get the boys working as a team and using their brains. Our printable treasure hunts come in many different themes and can be played anywhere.  The clues are interesting and fun, each one is a different - you can even set it up like an Escape Room! 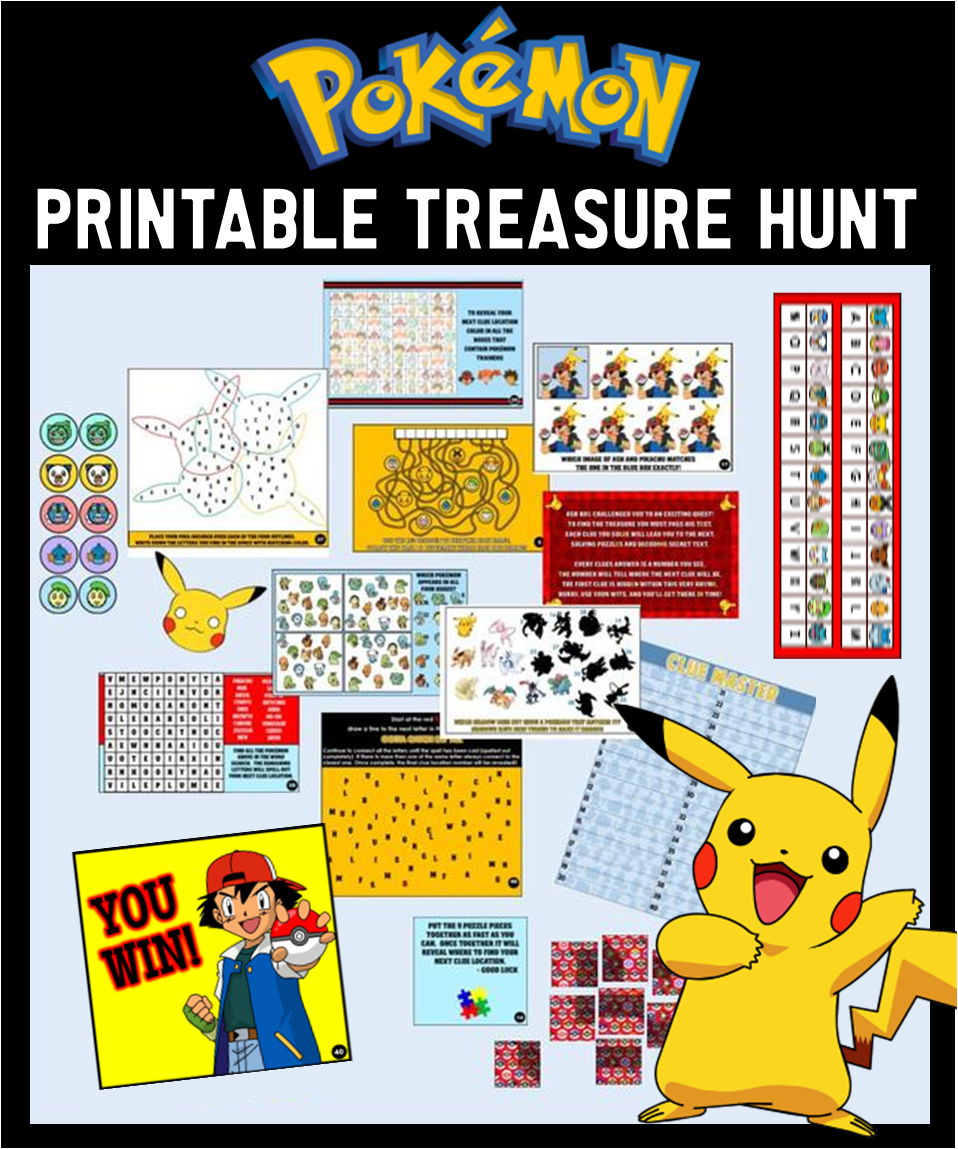 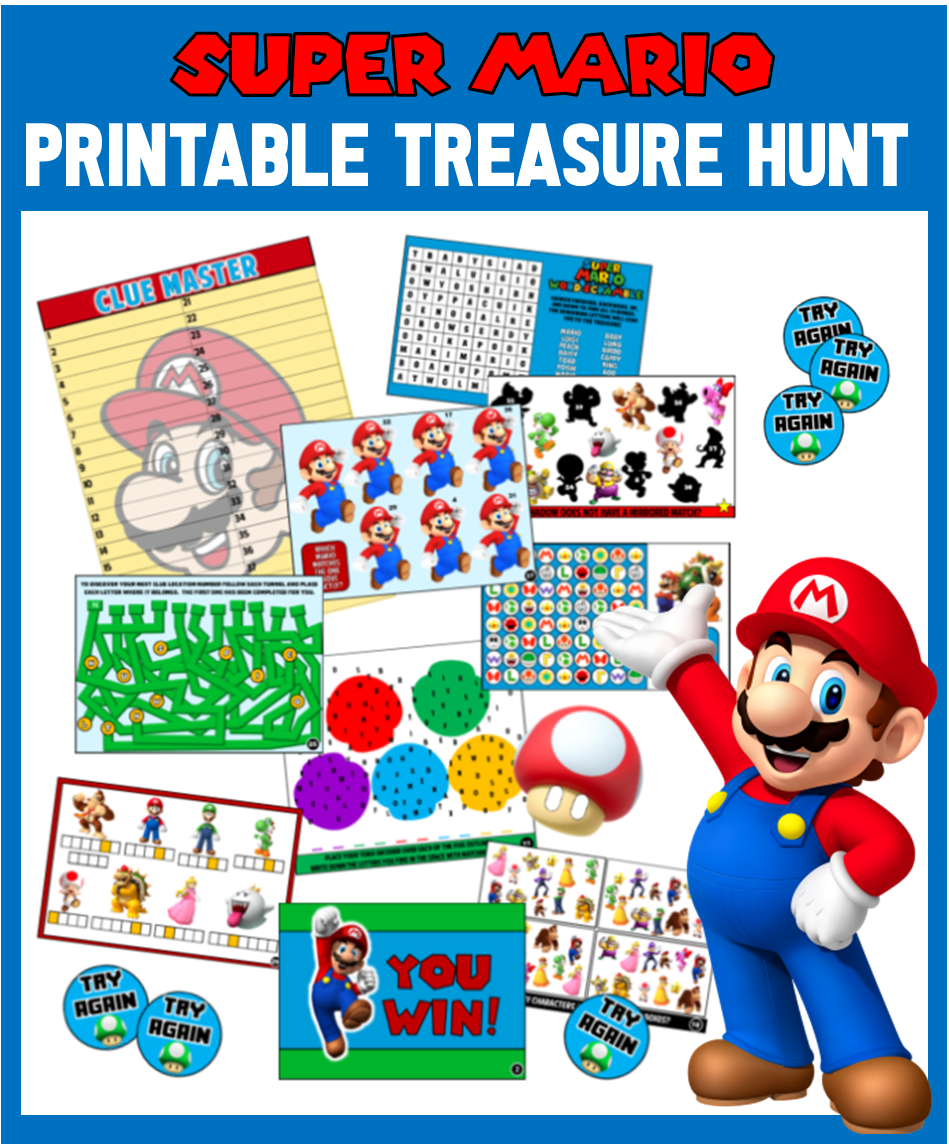 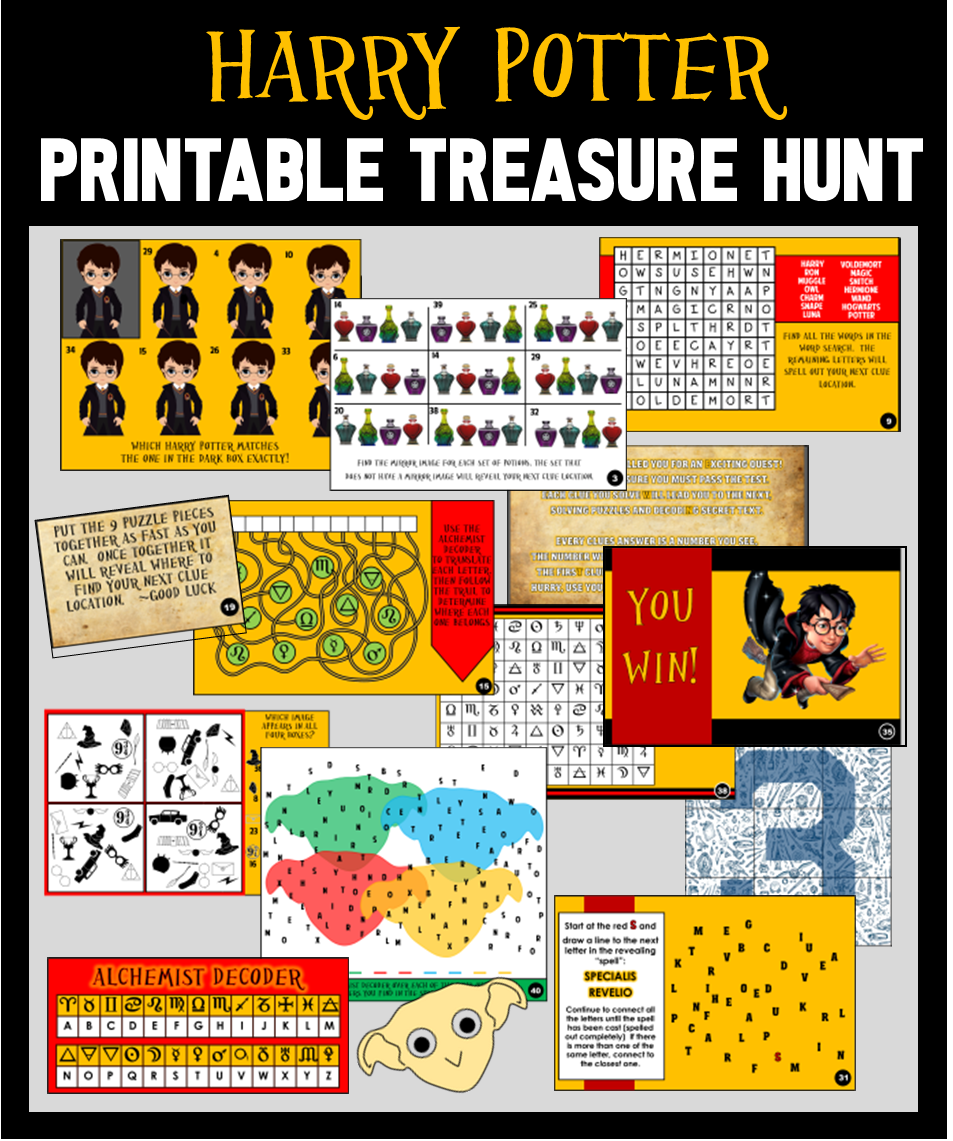 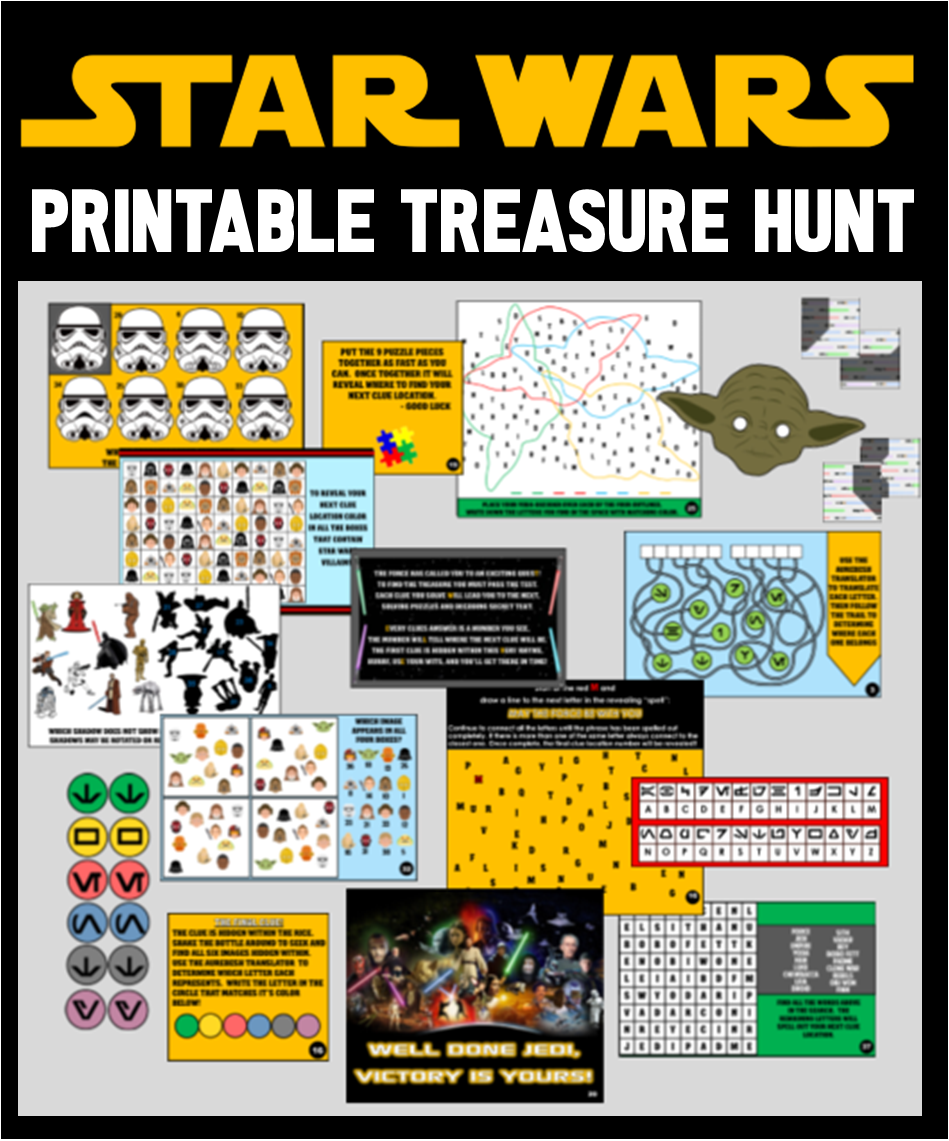 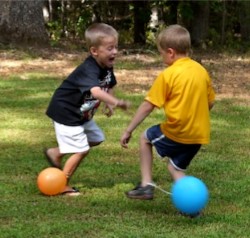 In this game players race to stomp on other players balloons that are tied to each players ankle.  The last players with their balloon intact wins!

Give each player a balloon, and tie a piece of string, streamer, or ribbon to the balloon and the other end to their ankle. The string should be about a foot long after tying.

On the start of go players chase each other around and try popping all the other players balloons while keeping theirs from getting popped. They can only stomp, players cannot touch their or other balloon with their hands.

BOYS SLEEPOVER GAMES / PARTY IDEAS
would you rather 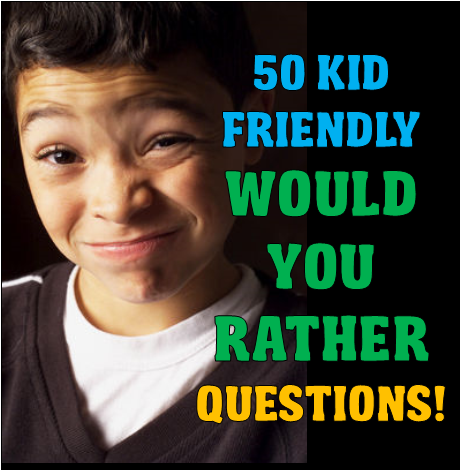 This is a fun activity for when it is time to settle down.  Players take turns drawing Would You Rather questions (written on slips of paper) from a bowl.

Would You Rather is a game where a question is posed and players must state what they would choose IF THEY HAD TO between two undesirable things. An example would be ' Would you rather have bad breath for the rest of your life or not be able to talk for the next year?"  Questions can  be whatever you want them to be.  If you need some inspiration for your questions check out these 50 kid-friendly Would You Rather questions. 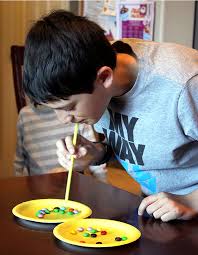 In this game players race to sort skittles into matching color cups by sucking each skittle onto a straw and placing it into its correct cup - nothing but the straw can touch the skittle!

1. Provide each player with a straw, a plate full of 20 skittles, and a cup for each color.

2. On the start of go each player sucks the skittles onto their straw as fast as they can and sorts them into colors using the cups.

3. The first players to sort all of their skittles correctly wins! 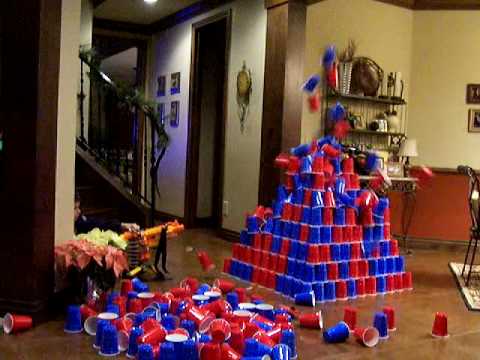 Create a wrecking ball by tying a rope or twine around a beach ball (or similar) and hanging that rope from the ceiling of the room where you are building the cup towers.

After the towers are built let the boys take turns swinging the wrecking ball at them until the room is nothing but fallen cups - then they can do it all over again!

Our editable boys sleepover invitations make it a piece of cake to get the word out on your celebration. Invitations are available for INSTANT DOWNLOAD.  Simply download, open in adobe reader, type in your personal party details, print and your done!

Invitations are 5x7 and come two per printed page. 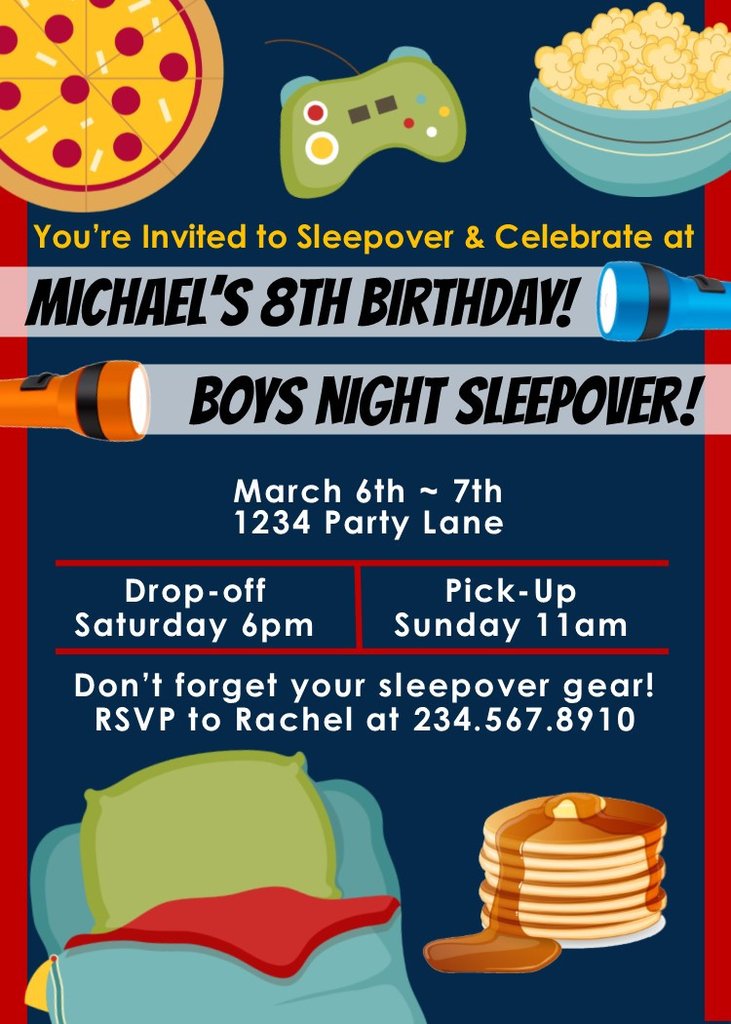 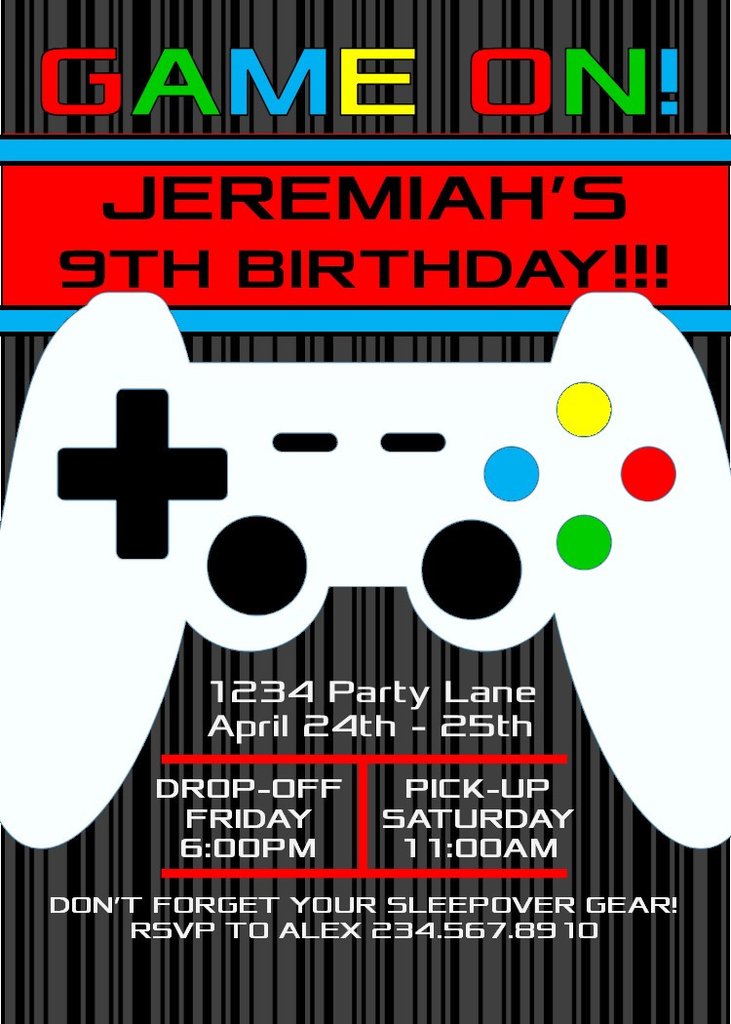 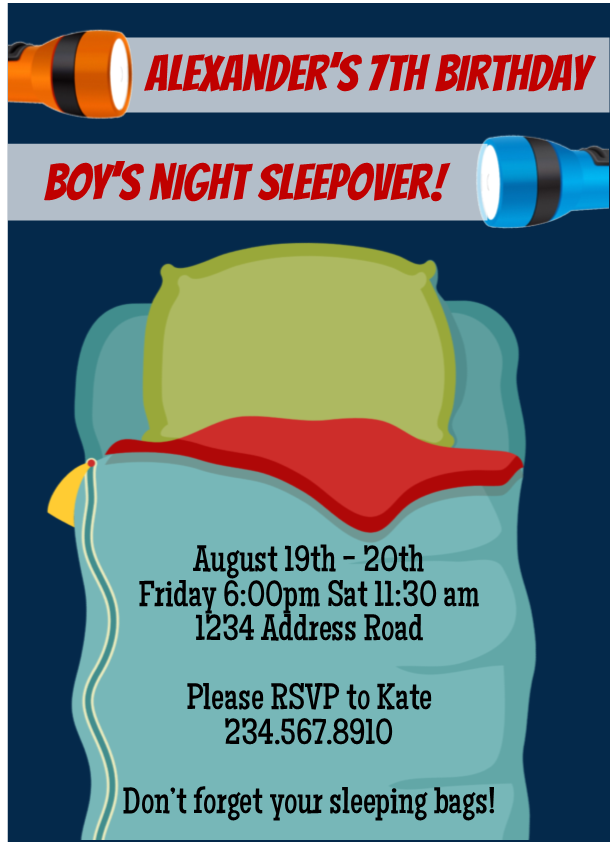 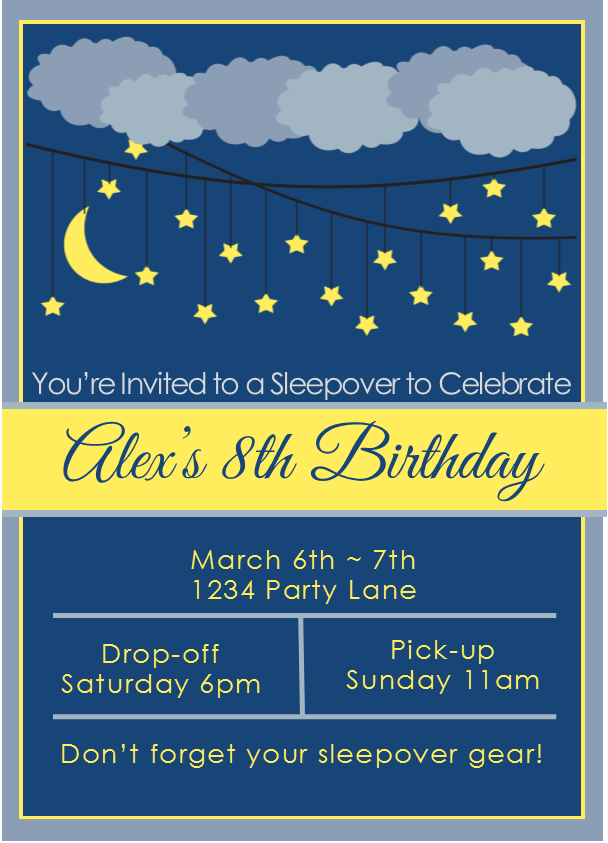 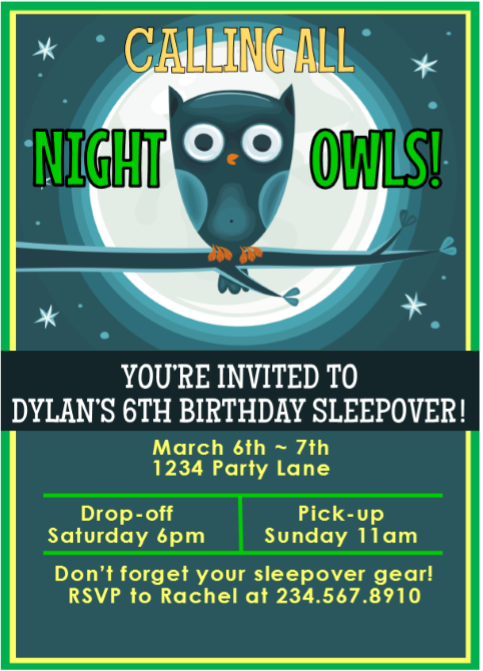 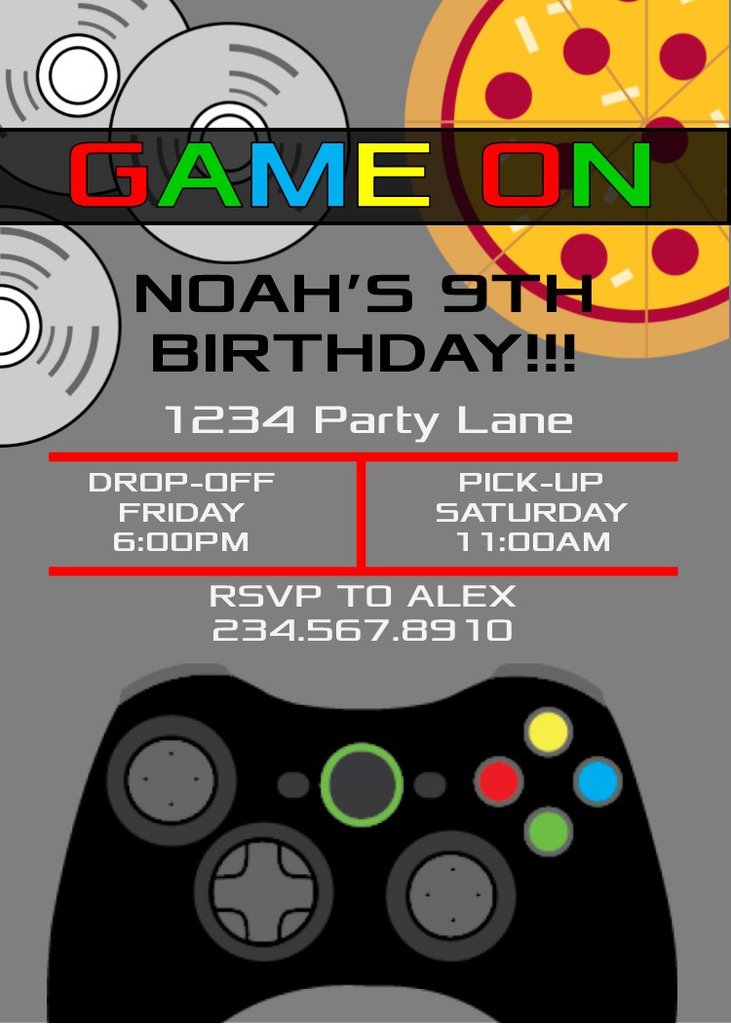