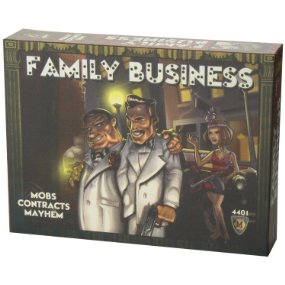 Family Business takes mob warfare to a new level of backstabbing, revenge, and general bloodthirstiness, which is what makes it such a blast to play. Every player controls a 'family' and plays various cards to off other players' family members. In a game with this little structure, it's possible for everyone to gang up on one unlucky soul, or for the damage to be fairly evenly spread. Either way, the last family standing is victorious.

Each player starts with a gang of nine characters. To try to get rid of other gangsters, contracts are played on them. If these contracts are not blocked by anyone, the targeted gangster is placed on the hitlist. As soon as six gangsters are on the hitlist a mobwar is started. This means that, at the start of every turn, the first character on this list is eliminated. This goes on until the list is empty.

Mobwars can also be triggered by cards being played. When no more than the last six or fewer characters are in play a constant mobwar is going on, until only one player has characters left.

In general players take turns clockwise, however, the turn goes to any player who plays a response card and then clockwise mode is resumed with the player next to him/her. Lots of interaction as players play cards to put gangsters on the list, save them, have them replaced, start a Mob War, or stop it...

Family Business, the card game of mob war, is a very fast-moving, unpredictable and enjoyable game. Each player takes the role of one of six mobs, all of which were historically real except the Bank Robbers, which is an amalgam of several criminals, including John Dillinger, Alvin Karpis etc. The purpose is to kill off all of the other mobs and be the only gang standing.

This may seem excessively violent, and perhaps it is for some. But you have to remember that it's really just about moving cards around. There's no real gore or violence.

As stated above, the game is fast-moving and unpredictable. Things are constantly in flux, and there is no foolproof strategy to win or even to protect yourself. The bullets are flying pretty much all of the time. Every game is different and a player who is dominant one moment can be the first one eliminated the next, preventing the game from ever becoming boring.

The game is also very easy to learn. The concepts are very simple and each card explains pretty clearly what it does. Games are not terribly long and never become stalemated.

When I first saw this game, I was intrigued by the whole elimination mechanic in that you lined mobsters up against a wall and eliminated them in turn. It gave me a sense of a ticking clock that was winding down fast. Since you can only play rescue cards on your turn, there’s a good chance that your mobster will be eliminated before you even get a chance to do so (especially when playing with a lot of people). There are plenty of cards that re-arrange the hit list, allow for substitutions, and prevent a contract from being placed from the get go, but there are also some cards that are truly nasty. One eliminates every mobster on the hit list for example, while another causes two mobsters to be eliminated every player turn…ouch!

I’d only recommend this game to folks who aren’t easily offended for being singled out during a game. When placing contracts and adding folks to the hit list, you often have to choose who you’re going to target. This can be a recipe for disaster if you have a bad loser or two in the group…it’s even worse if they have a short fuse. While child appropriate, a parent may want to monitor or participate in the game to prevent any potential problems that might occur with this kind of elimination style gameplay. A mature group who can bypass those hard feelings will find a strategic element to the game as well as they attempt to shape the hit list to each individual’s benefit. All in all, this is a game I’d be happy to come back to on a regular basis.

This game is an absolute blast! It's actually based on true people and events which makes it pretty cool too. I have played this with children as well as adults and it is so much fun with every group! I have bought it multiple times for myself and as gifts for other people and it never disappoints!

My second favorite game. This is very addictive and very competitive. A friend of mine and his wife didn't speak to each other for two days. His wife has it out for me in most games. It's like we are a real mob.

Check out the rest of the reviews at Amazon.com