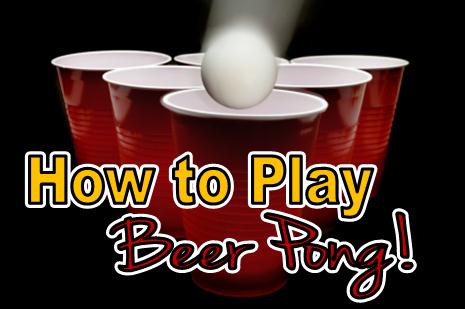 There are many versions of Beer Pong. Depending on who you are playing with, they may have different rules they play by. Therefore it is a good idea to make sure everyone is playing by the same rules before you begin. This will prevent any drunken disagreements! 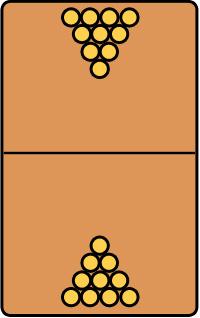 Beer Pong usually uses a ping pong table. However, any large table will usually do just fine. Just be sure that whatever surface you are playing on is stable, flat, and you won't be overly bothered by beer spills. Afterall, the beer WILL spill.

The first order of business is to set up the cups. The ideal cups are "Dixie" cups and should be filled about 1/4 full with beer (or about 4 ounces). Use the "ribs" on the cup to make sure all cups are evenly filled.

Once you have filled the cups, you should arrange them bowling alley style on the table as shown in the image to the left.

The rack shown at left uses 10 cups per rack. Shorter games can also be played by using different racks (usually 6 or 4 cups per rack). Generally, shorter games use one of the "Re-racks" shown later in this article

If playing "doubles", then there are generally two balls that are in play.

Arc Shot - This method is a "direct" shot that attempts to "arc" the ball directly into the opposing team's cups.

Fastball - Also known as a "laser beam", the fastball is sometimes not allowed under house rules due to it's tendency to get out of hand. Where allowed, the Fastball is a "direct" shot.

Bounce - Bounce shots are "indirect shots" when the shooter bounces the ball into the cup. Once the ball bounces on the table, the opposing team can block by swatting the ball away from their cups. Assuming the shooter successfully makes this type of shot, the opposing team must drink two cups of beer - one is the one that the ball landed in, and the other is the choice of the shooter. 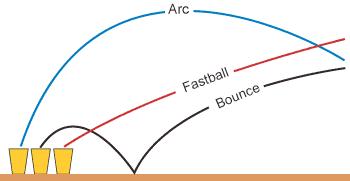 At various points during the game, the cups must be re-racked. This happens at the end of a team's turn and when the number of cups drop to 6, 4, 3, 2, and 1. Racks are arranged like this:

Blowing/Fingering
If a ball is spinning on the edge of a cup, a player can defend the cup by either blowing the ball out of the cup, or by flicking it out with his/her fingers. Depending on house rules, some games go by the rule: dicks flick, bitches blow; meaning only females can blow the ball out, while only males can flick balls out with their fingers. Once the ball touches the liquid in the cup, it is dead, and the defending team must drink.

Ball Blocking
If a ball bounces off of any object it is considered a "bounce" shot and can be swatted away by the defending team.

If the shooting team recovers a ball either because the ball bounced back, or the defending team swatted it back, then the shooter may be entitled to a "Gentleman's Shot". In this case the shooter can take another shot, but generally has to do so with his/her back turned.

If a defending team is about to lose, and both team members make their shots, then the game is extended. The table is re-racked with six cups per side, and game play continues as usual.

If the losing team fails to make any shots during the course of the game, then this is considered a "shutout" game. Under this circumstance, a special consequence is set in place to put particular ridicule on the losing team. Typically the losing team is required to streak naked through the house, or some other similar consequence. This adds extra excitement and incentive on both sides.