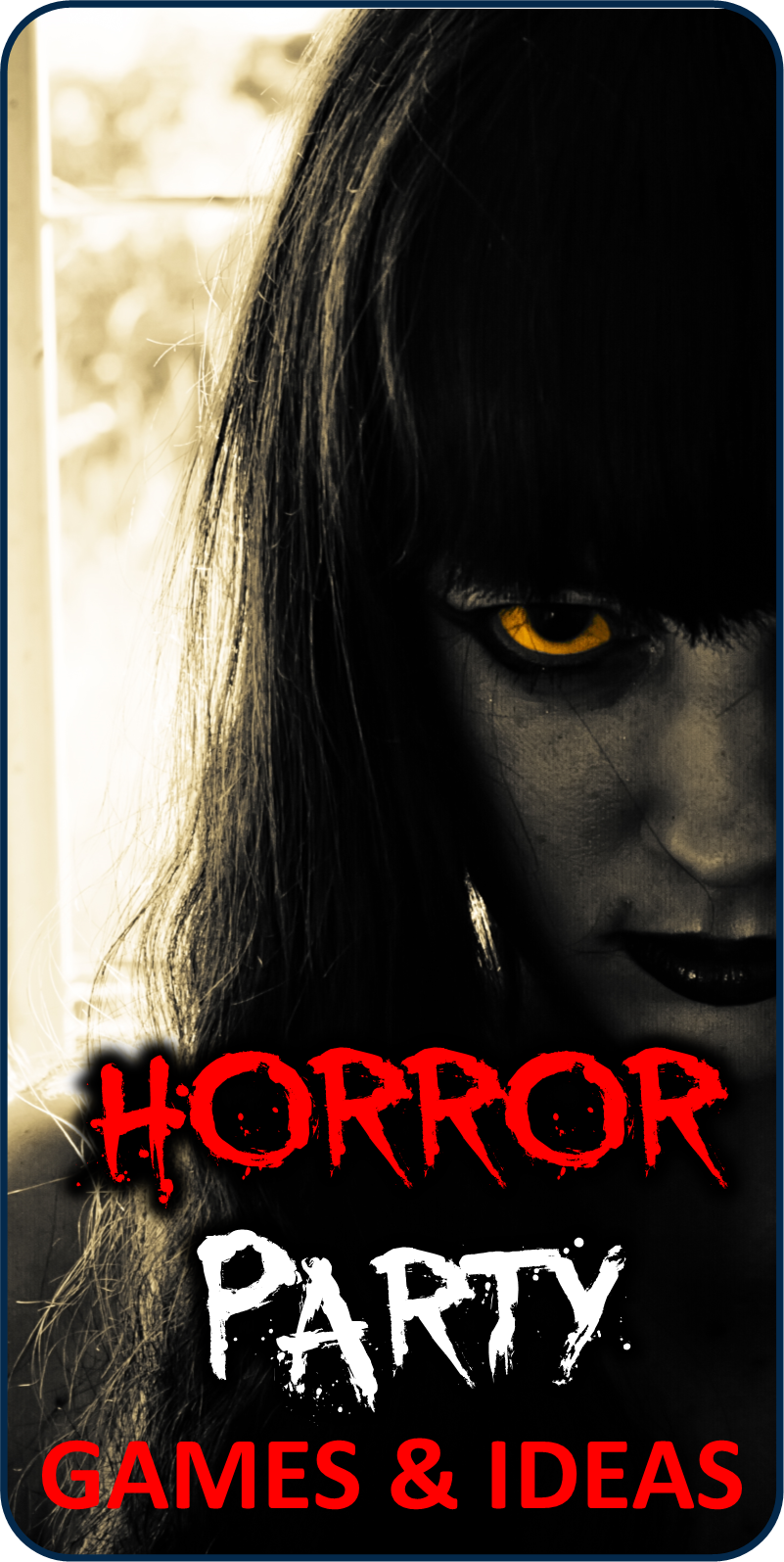 Don’t think that a horror party is only suitable for Halloween, if you are a fan of scary movies and all things that give you goose bumps this could be the perfect theme party for you.

Tons of fun scary games to bring the fear out in your group. Some games are of true paranormal nature, some are just scary or creepy fun, and others are not so much as scary, but meant celebrate scary movies and test the fans of those horror films.

Have you ever heard of the game Concentrate, also known as the 'How I'm Going to Die' game.  It's an old game recently brought back to life by the power of the internet.  You need at least two people. One is the chanter the other is the reciever. After the chant is complete it is said the receiver will dream of how they will die that night.  Some play a version that devines your death from what color you see - but that's a new interpretation. 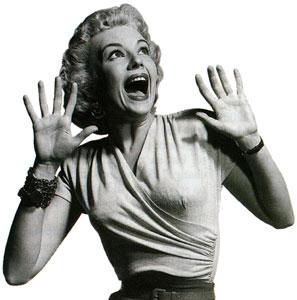 The rules to a scare fest are easy. Divide players into teams, depending on how many guests you have you can form 2-4 teams.

The object of the game is to make members from the other team scream as much as possible. Consider dividing up the teams a week or two beforehand to give teams time to think of strategies and/or scream worthy pranks.

Rules are simple, no one is to actually put anyone else in any physical danger. All screams must be genuine and not forced, bribed, or coerced. What counts as a "scare" is up to the host. It usually is a scream, though sometimes the host will agree to counts jumping in fear as a "scare" also.

To keep track of screams provide each team a color and give every member of that team 5 poker chips in their teams color. When another team makes them scream then they must forfeit to them one of their chips.

At the end of the playing time (which you can determine to be anywhere from 30 minutes to all night long) the team with the most chips from the other team wins. The team who lost the most chips usually has to have a consequence. A common consequence is having blood and guts ( red water and cooked pasta) dunked on you. 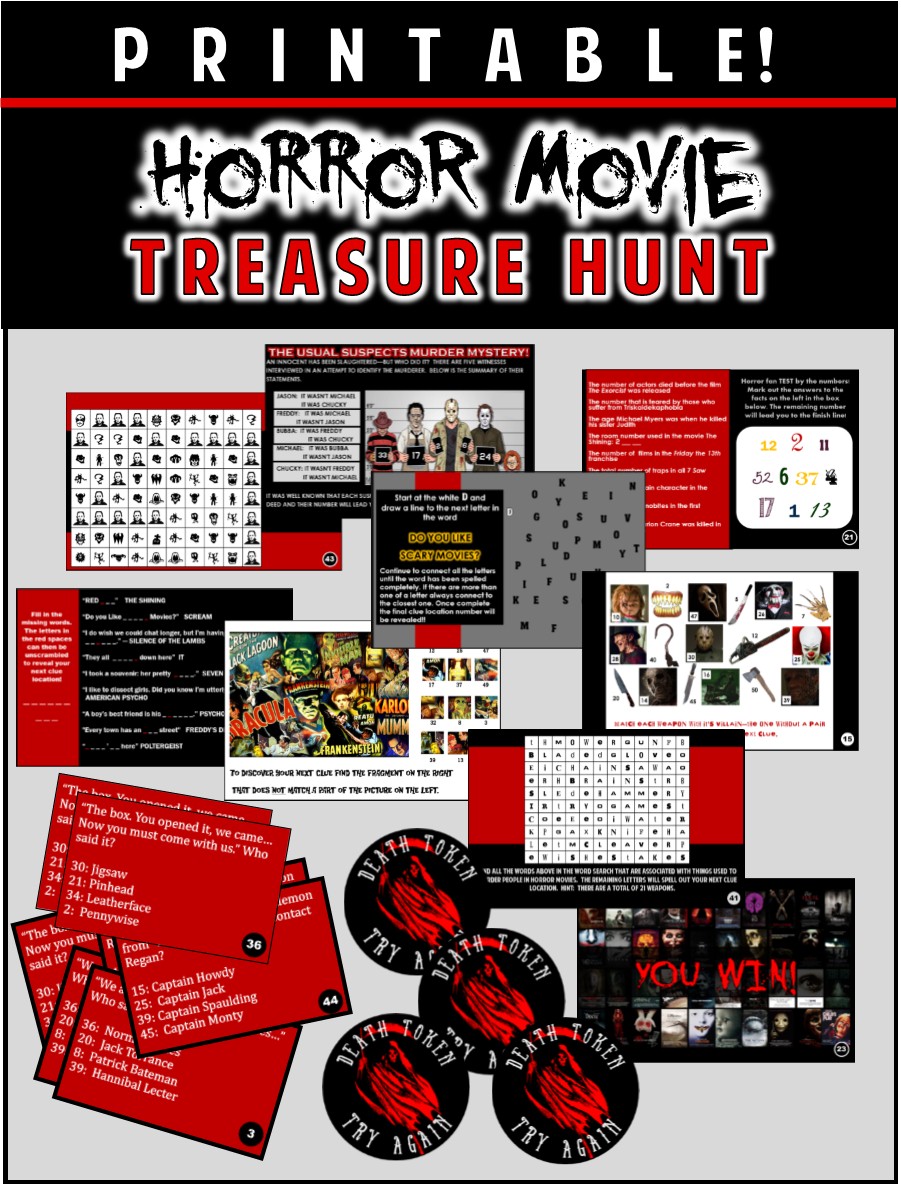 Our printable horror movie treasure hunt is an awesome an easy game to set up and let your friends test out their knowledge of horror movie films.

There are 20 clues, each clue involves either trivia, games, or brain teasers that involve classic horror films such as Halloween, Friday the 13th, Hellraiser, The Shining, Nightmare on Elm Street, It, Child's Play, etc. 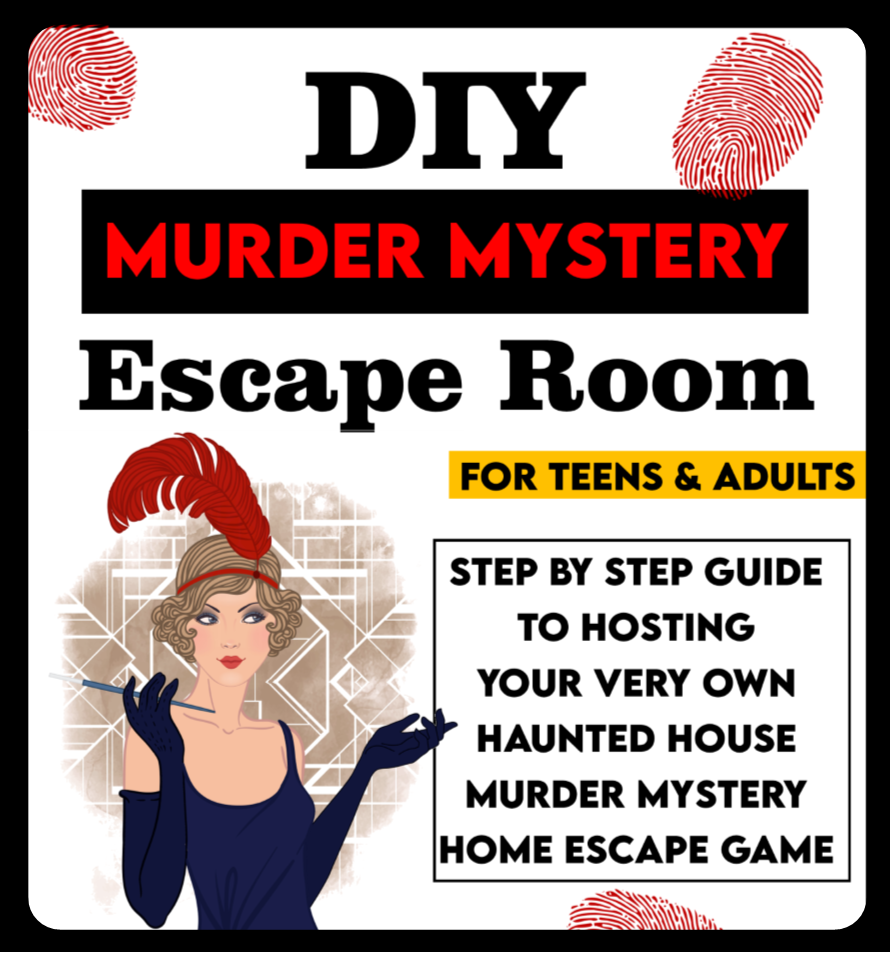 Throw your very own Murder Mystery Escape Room where players (teens/adults) are trapped in an Haunted House and must solve the mystery of which ghost killed all the others before time runs out and they become ghost themselves.

This DIY Murder Mystery Escape Room can be set up and played anywhere.  You will need to purchase a few cheap props which I will tell you about for each clue and print our our DIY Helper Kit. The game is explained in detail and how to set up each clue so you can put it together with minimal effort. Get Details 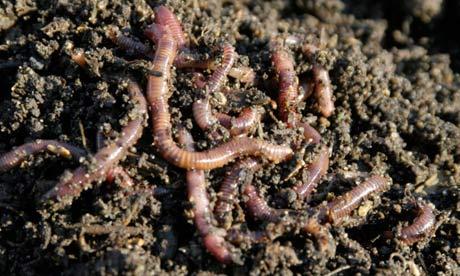 Each person must choose one box to place their hand down into to (until it touches the bottom) for one minute. They do not know which box is which, so they do have a one in four chance of getting the NICE box. Here are what the boxes should contain:

After each person takes their turn mix up the boxes so no one figures out which one is which. This game makes a great icebreaker to get everyone in the mood for a night filled with horror and creepy surprises.

Killer Among Us is a Murder Mystery party hunt game in which one of your friends is the killer and the other players get to bribe, blackmail, form alliances, and more - All in order to be the first to discover who the killer is.

Even the players that get killed still get to play - they're just ghost now,

Unlike other murder mystery games out there you can play as many times as you want because this game has a different killer every time! You can play with up to 50 other players!

Turn your scary movie marathon into a game by giving everyone a special bingo card filled with things they might see in a scary movie before the film begins. Give prizes for first bingo, first to get all four corners, and first to fill their card completely. Here are some good fillers:

Make and print your own custom bingo cards for free at Print-Bingo.com . Just type in the words or phrases you want to use, and they will generate the bingo cards for you – FOR FREE!! Use the word list above and it’s almost done for you. It just can’t get much easier than that!

HORROR PARTY GAMES & IDEAS
LIGHT AS A FEATHER,
STIFF AS A BOARD 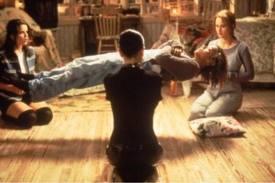 Turn out the lights and light a candle to set the mood for this spine tingling game. This is a classic paranormal party game where one person lays on the ground, crosses their arms over themselves, and closes their eyes.

All the other guests form a circle around that person and wave their hands over them chanting “light as a feather, stiff as a board” over and over again. The laying person should not speak at all.

Everyone should be concentrating on the person lying on the floor. Finally the person leading the chanting says “now”, and everyone places two fingers from each hand underneath the person, and still chanting begins to raise that person up.

It is said if done correctly the person will float up! Hmmmm, wouldn’t that be a conversation starter! 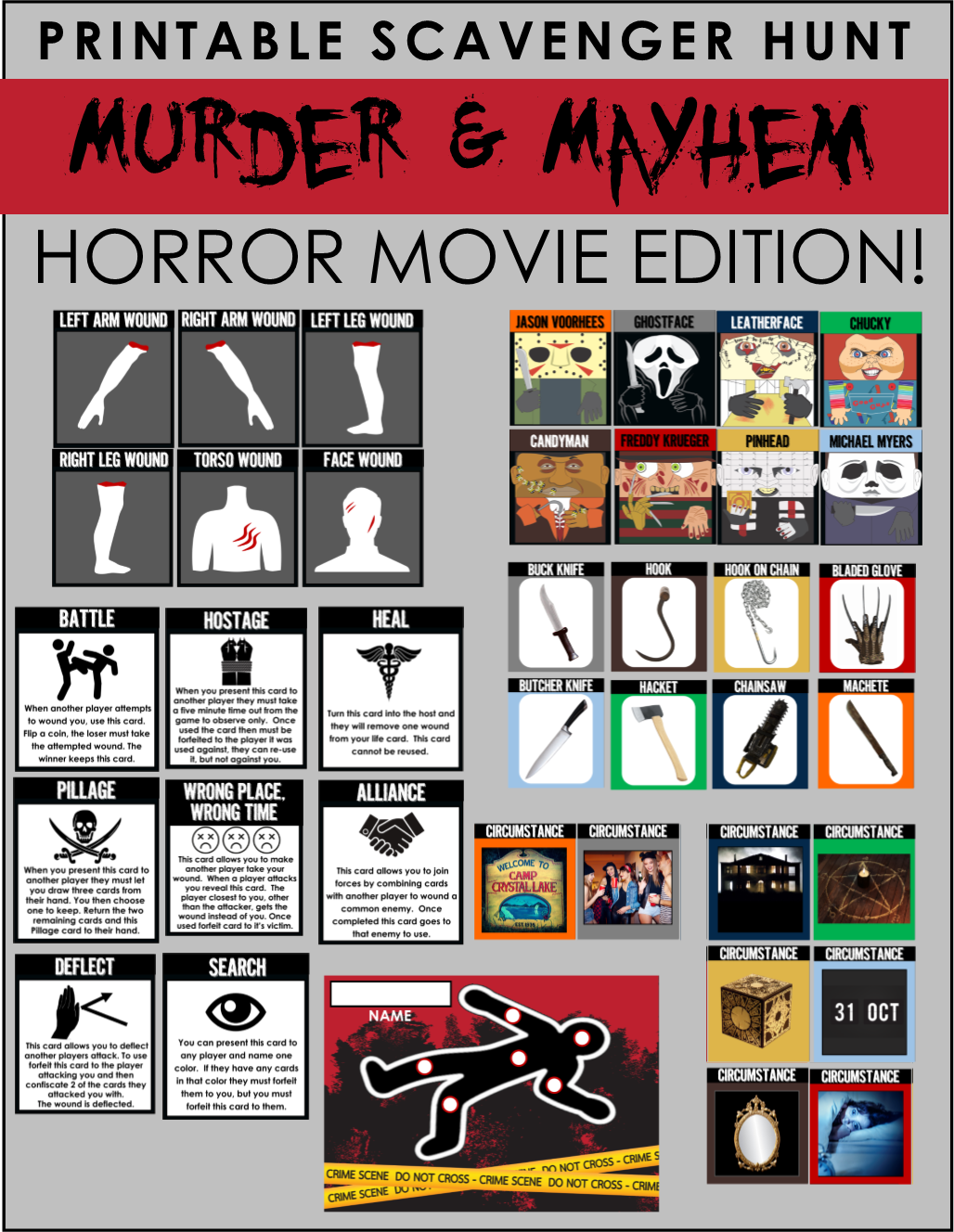 Unlike traditional murder mystery games in this game EVERYONE is the killer - last one alive wins!

This hunt is perfect for the classic scary movie buffs.  It features 8 of the great Horror movie villains.  Players must search the playing area for game cards (which the host hid like Easter eggs) and find a Killer card, plus their coordinating weapon and circumstance card.  Once they have all three they are able to wound another player and mark it on their Kill Card.

Three wounds and a player is dead!  This game also features several specialty cards that make the game even more interesting. 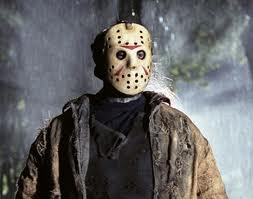 How well do your guests know there scary movies? Find out in this fun scary movie buff game! To prepare this game you’ll need to create and set up clues or homages around your playing area that replicate or represent items from classic scary movies. Examples could include:

Think up and create as many clues as you can, they can rate from obvious to the not so obvious. Divide guests into teams and arm each team with a digital camera. Give each team a list of the movie scenes that you represent somewhere at your party.

There job is to find as many of them as they can, snap a photo, and then mark which movie they came from on their list. Set your time limit for however many clues/homages you create. The team that collects the most scenes AND correctly identifies what movie they came from wins!! 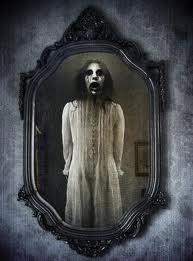 Do you dare take the Bloody Mary Folklore Challenge. They say to summon the ghost of Bloody Mary from the dead you must only stare into a mirror in the dark and say the name “Bloody Mary, I stole your baby” 3 times. Bloody Mary is most often said to be the ghost of a young woman whose baby was kidnapped. People wrongly accused of killing her own child, but in truth the loss turned her insane with grief and ultimately she took her own life.

They say if you summon Bloody Mary she will take a violent revenge out on you. Do you dare summon her?

If any of your guests are brave enough to take the Bloody Mary dare then have something fun prepared, the most often used Bloody Mary prank is to have someone hiding in the shower wearing a scary mask ready to jump out after the person finishes the third “Blood Mary”. Hilarious, have your video camera ready for that one. 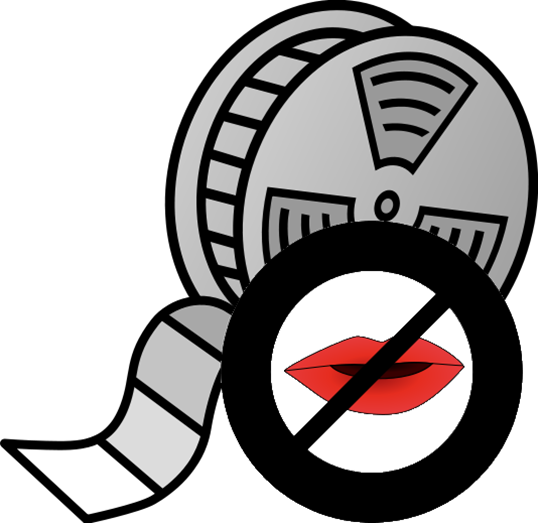 This is not a scary game, but a fun game nonetheless for horror movie buffs. You divide players into teams, having a least one person be the judge, preferably more. Each team takes turns pulling a famous movie scene from a hat and acting it out silently with their teammates.

The judges must try and guess what movie scene they are acting out. They have 1-3 minutes for each scene. If the judges guess the movie then that team receives a point, which is why it is best to have more than one judge. Each team plays out 5-10 scenes, depending on how long you want the game to last, the team with the most points at the end wins!

In this paranormal activity you may get a glimpse of who you were in a past life. You’ll need a candle and a mirror. Turn the lights off in the room and light the candle, continue to stare into the mirror without blinking. Soon your face will start to contort and a new face will appear. This is the face of the person you used to be. This game is perfect if you’re looking for a not too scary, but definitely freaky paranormal game.

Forget the familiar cliche ghost stories, the scariest stories, by which I mean the ones that really give others the goose bumps, are the one drawn from real life. Light a candle and form a circle around it. Invite everyone to share the closest brush with the paranormal they've ever had or anyone they've known has ever had. 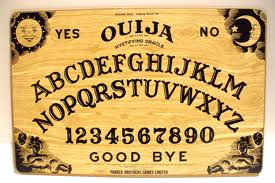 The infamous Ouija board - it's simple to use. Rest your fingers lightly on the game's oracle and ask the spirits around you to speak to you through the board. Now ask your question.

Concentrate hard and watch as the answer is revealed in the message window. Will it tell you yes...or no? Will it give you a number...or spell out the answer? Ask any question you want. Ouija will answer. 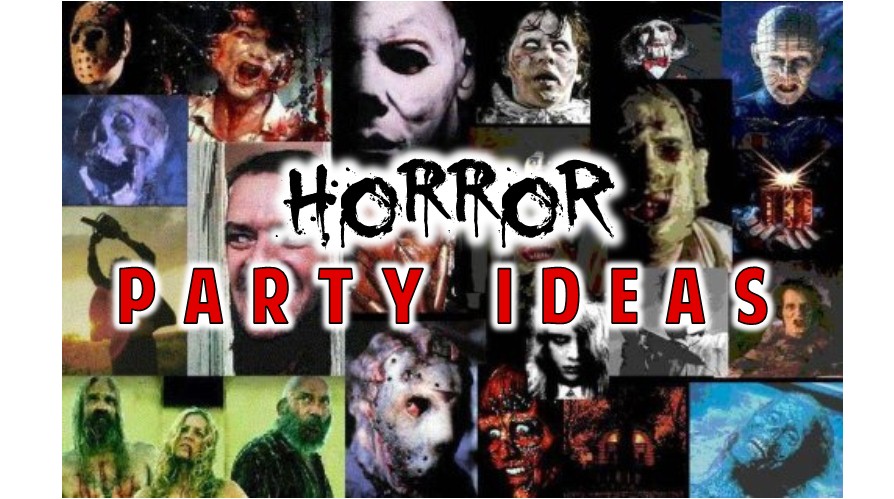