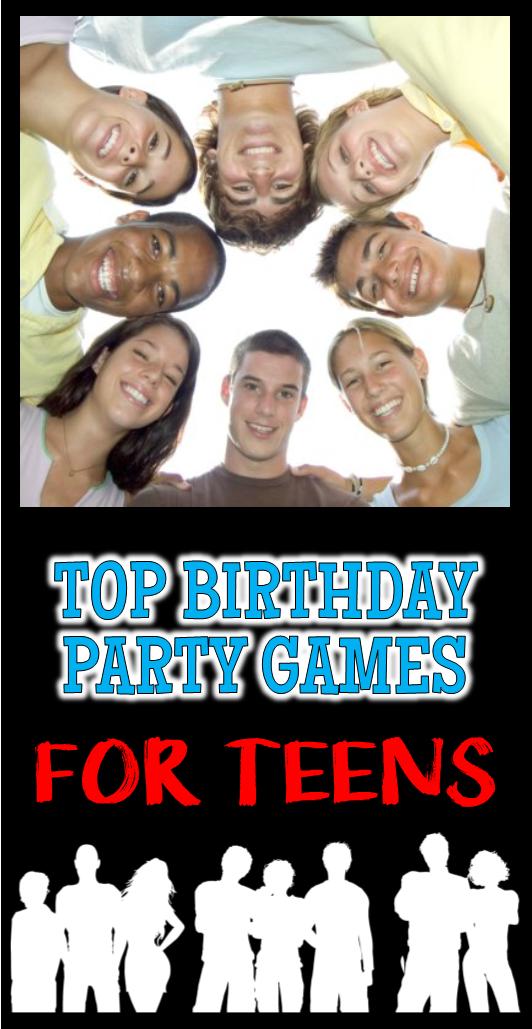 So you’re having a party and you need to find a cool birthday party game for teenagers. You’ve come to the right place, cause we have dozens of awesome teen party games for you to choose from.

You’ll find a little bit of everything so you can find the birthday party games that are perfect for your party. Kill the bore factor from your party.

This is page 3 of our awesome collection of teenager party games. Make sure you check out the other teen party game pages if you haven’t already!

This is a fun party game where everyone huddles around in a circle arms over the others shoulders. Everyone puts their heads down and on the count of three looks up at another player. If two people find that they are looking at each other then they both scream and fall down dead. They are out and the next round begins. Keep playing until only two players are left. This teen party game is best with a medium to larger group of friends.

This party game is HILARIOUSLY FUN! Fill all of the baby bottles with soda, punch, whatever drink you are serving. Set them up and at the start of go everyone must suck the baby bottle empty. First one done is the official best sucker! Nipples come in different size holes so make sure you get them all the same, and don’t get the newborn ones or it will take too long. Don’t worry the packages show the nipple sizes on the box.

This is a fun game where everyone ends up stuffing themselves into one hula hoop. It’s played much like the childhood classic musical chairs, except instead of chairs you have hula hoops. You remove a hula hoop after every round but nobody is out because you can share a hula hoop in this game.

HOW TO PLAY: Start out with enough hula hoops for all players, and set them up to form a large circle on the ground. Everyone bops around the hula’s while the music is playing, but when it stops they must run to a hula hoop and pull it up around their waist. Everyone must be in a hula hoop or their out. After every round remove a hula hoop and play again. By the end of the game everyone will be trying to shove themselves into the last hula hoop and that is so funny it is worth playing the whole game. Make sure you take pictures.

I don’t know if you’ve watched the TV show hosted by Nick cannon, but it is hilarious. Check it out on youtube.com if you haven’t. In this game divide your friends into small groups and let each team draw a funny topic out of a bag. They have 10-15 minutes to create a rap to match the topic. The funnier the topics , the funnier the raps. Groups then perform the rap for everyone, they can elect one member to perform or perform it all together. Some funny topics include.

In this game you use play-doh ( or other clay product) to try and get the rest of your team to guess the clue. Prepare index cards with the clues on them before the party. If you would like to participate have your parents or someone who will not be playing the game make out the clues. All the clues should be a noun or something that can be molded with clay. When it’s time to play one person draws a card and molds it for their team to guess. They have 1 minute. (If they cannot guess the other team has one guess to steal. If they guess right they get double the points.) Alternate turns between teams. Winner is the team with the most points at the end of the game. Of course there is no talking or any other clues that the claymator can give while they are trying to get their team to guess.

This is a fun icebreaker game for teen parties. Before the party go through magazines or look on the internet for large facial shots of famous celebrities. Cut or print them out. Cut out different parts from the celebrities such as lips, eyes, nose, etc.. Make sure you keep up with what goes to who. Glue or Tape each separate party onto another piece of paper or index card. Make sure to number them.

When it is time to play, provide players with a sheet of paper numbered for however many different parts you have and let them go through and match what they think goes to who. When everyone has completed their sheet go through the answers and see who got the most right. Provide a fun prize.

How well do you really know your friends? This is a perfect game for small close groups of friends. Before the game begins prepare a bunch of fun questions and write them on index cards.

Get creative and you can come up with some great questions. To play the game provide everyone with a mini dry erase board. You can get these for a dollar at the dollar store. If you can’t get these you can use paper and pencil. One person draws a card and reads it allowed. They write the answer about themselves on their board. Everyone else writes what they think the answer is for the person who asked the question. The asker reveals their answer, and everyone who answered correctly gets a point from that person. Continue letting the next person ask a question.

To score write everyone’s name on a piece of paper. Every time they correctly guess another players answer write that person’s initials under the asker’s name. At the end of the game you’ll be able to tell who knows who best by counting who’s initials show up most under each persons name!!

BIRTHDAY PARTY GAME FOR TEENAGERS
been there - done that!

Milked a Cow? Traveled to Europe? Missed a Flight? Been to Disney World? Find out the answers in this hit party game. From the outrageous places traveled to the basic things people do every day, you'll be amazed by the things you learn. This easy-to-play game is a great ice breaker for groups of new friends and a must have at every family game night. Players score by guessing the number of players who have Been There or Done That.

Fun content for everyone. With over 850 scenarios, including suggestions for large groups and other fun variations, no game is ever the same! For hours of fantastic fun - the choice is Been There Done That! Buy now and start the party!

Have each player write a “crime” they have committed on a index card. The crime can be anything from a crime against fashion, to a mean thing they’ve done, to an embarrassing story… ANYTHING. They can’t let anyone else know what they are writing, but they need to write their name on the card. Collect all the cards, then choose one card out of the stack.

Ask the guilty party and two other guests to stand in front of the group. Read the “crime” and tell the three that they are to do their best to convince the rest of the group that they are the guilty party. Let other guests question the suspects and then guess who really did it. Everyone writes their guess on a piece of paper. Don’t reveal the guilt party until every crime has been read. Whoever guesses the most suspects correctly is the best lie detector and detective.

You know the show – Now let your friends show off their stuff. Have each guest get up in front of the group and show off their most bizarre talent. Maybe they can twist themselves into a pretzel, maybe they know how to burp the alphabet. Everyone has a talent, no matter how strange it maybe. Have everyone vote and give out trophies/prizes:

You can find trophies super cheap at orientaltradingcompany.com.

Here is another fun hilarious teen party game to add to the collection. Loop ribbon or fishing line through donuts and hang them individually from the ceiling or a clothes line outside. On the start of go contestants must place their hands behind their back and eat their hanging donut as fast as possible. It’s not as easy as you think. If a donut falls on the ground, their out. The first one who eats their entire donut wins. This is another game that you must have the camera ready for!

In this laughter-inducing, competitive card-based game, teams of players, hampered by cheek retractors, attempt to read and interpret/speak out phrases and.... Hilarity ensues! Good for Ages 12+, with virtually unlimited players (when played using the "Alternate" rule set), Watch Ya' Mouth is a must for any gathering, party or game night.

Be warned: Stomach-Cramping, Eye-Watering laughter is a very frequent occurrence. "One of the funniest party games there's been" Learn it in seconds, play it for hours, and create lasting memories with your friends and family.

Take turn kicking your shoes off your feet and seeing who can kick their shoe into the golf holes (hula hoops. Space out hula hoops throughout the playing area and play one hole at a time just like in golf. Make sure you also designate a starting place (t off) for each hole. Designate a point value for each hole. For example 500 pts, if a player makes a hole in one then they receive the entire 500 pts, subtract 100 points for every extra kick it takes a player to kick their shoe into the hole. At the end of the game whoever has the most points wins.

In this crazy teen party game players divide into two teams and must pop as many balloons in their teams color as they can. The trick is the balloons are hanging are hanging from the ceiling and players must use pop them with their heads. To do this, each team is assigned a color and given a hat with a pin sticking out the top.

On the start of go one player from each team puts on the team hat and has 20 seconds to pop as many balloons for their team as they can. They cannot touch the balloons with their hands or feet at all. After 20 seconds they must take off the hat and pass it to the next player. After all players from both teams have had their turn the team with the most balloons popped are declared the winners.

ADD YOUR TEEN PARTY GAME IDEA TO THE SITE!