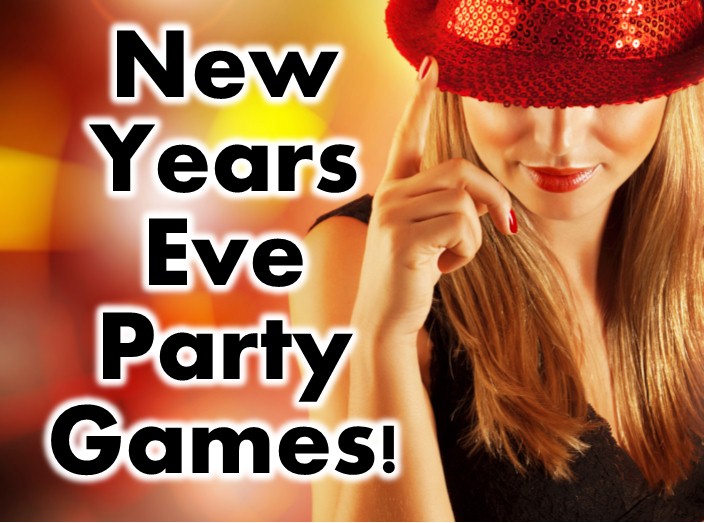 It’s that time again, a whole year has passed. While it seems it flew by it is filled with millions of memories and happenings. So why not throw a party! If you are in need of games to bring your party to the next level, you have arrived.

Having a New Year’s can be a bit nerve-racking. The idea of organizing something that will be a grand memory to reflect upon is taxing. But, planning a gathering that will be the one that starts everyone’s year off right can become down right hectic. Have no fear.

We have gathered some great New Year’s games and activities to spice up any night. If you want to get a little crazy we also have New Year’s Drinking Games included.  So here is to the New Year and bringing it in with a bang!

You will need old magazines, newspapers and other literature from the current year, to use as references for this game. You will need to locate several big events that took place throughout the year. You can write them down on sheets of paper or cut out the sections pertaining to them. Fold them up and place them in a bowl.

When your guests are ready to play a game have them gather around. Ask for a volunteer to start the game off. They will go up in front of the group, pull a paper and read it to themselves. They will have one minute to come up with something to act out, without speaking or making a noise. They will have one additional minute to act it out.

The remaining guests will try to guess which event they are acting out. The person to guess correctly will go next. This continues until the bowl is empty or you are ready to move on to a new game. The person with the most correct guesses wins the game.

This is a silly game that is sure to have everyone laughing. Before everyone arrives you will need several sheets of and the beginning of each one should be “In the coming year you will…”

As the guests arrive you will hand each on a paper and pen and have them finish it up with a two to three sentence prediction. You can encourage them to be as comical as they please. Collect all of the papers and then hand them out to everyone. The guests will take turns reading their fortune for the year and sharing in the laughs with everyone around.

This game only requires your guests to pay attention and have a bit of a good memory. Gather everyone around and be the first to start the New Year’s List. You will say “I’m starting my new year and I’m bringing….” The first person will name something that begins with an ‘A’. The next person will say the phrase, repeat the item the first person chose and add something that starts with ‘B’. This continues down the line, following in alphabetical order. If someone forgets something on the list, they are out. This continues until there is only one person left in the game.

For this game you will need several plastic drinking cups and beer. Have everyone wanting to play sit at a table. Fill a cup about half way full and place one in front of each player at the table. When the game starts they will race to drink the beer and place the cup open side down on the table. Then they must use their fingers and flick the cup in an attempt to flip it right side up. The first to get it done wins that round. This continues until someone has won three rounds or others tap out and leave a winner.

You will need champagne, champagne flutes, plastic bowls, and plastic spoons. Give each player a bowl with champagne in it, a spoon and an empty flute. When the game begins they must use the spoon to transfer the champagne from the bowl into the flute. Once they have gotten all of the Champagne into their glass they will grab their glass and stand. The first person to get this down will get to give the toast for the New Years.

This game is a fun one because not only is it a guessing game, but gives others a chance to act a bit.

As your guests arrive you should have pen and paper ready. Have each guest write down three New Years resolutions on a piece of paper. Collect the papers and mix them up. Have the guests gather around and hand each one a blank piece of paper, a resolution, and a pen. The guests will take turns reading the resolutions they were giving. They can use different voices and be as dramatic as they like during their reading. Everyone will then write down who they believe the resolution belongs to.

After everyone is done reading you will go back around and read the resolution aloud again. The person who wrote it must reveal themselves as everyone checks their answer to see if it’s correct. The person with the most correct guesses wins the game.

A couple of bags of Hershey Kisses are all you need for this game!

As your guests arrive you will give each female guest five kisses. The men must try to obtain the kisses from the females by wooing them in some way. They can make them laugh, serenade them, dance for them, or do whatever it may take to earn a kiss.

The man with the most kisses at the end of the night will be crowned the King of Kisses and wins a prize (A huge Hershey Kiss is a cute gift). If you want to allow another winner you can ask the King to choose a Queen of Kisses and she also wins a prize. It can be whoever he likes. This game is a bit of friendly competition, great for mingling and full of laughs.

This game only requires cans of beer, willing participants, and a couple of blindfolds.

Take two volunteers to begin the game. Have the two sit across from one another at a table and put on their blind folds. Vigorously shake one of the cans of beer. Place it and at least five other beers on the table apart from one another. Ask the guests standing around to stand on the side of the table of the person they believe will pick the beer bomb. If they do not think either will pick it they must take a seat.

Have the players take off their blindfold and quickly pick a beer. They will hold in under their chin and open it. If either person’s beer explodes that person must chug their beer bomb. The people who thought neither would pull the bomb must also chug a beer. If neither explodes, the person with the most people on their side must chug their beer. Two more people step in and another round begins.

This game puts all guests at risk for getting bombed in more ways than one.

This game is like an adult version of musical chairs, a drunken version. It only requires you to have drinks, guests, and music.

This game is great for couples or close friends. All you need are chairs and blindfolds. You can use loose material or even a neck tie if you don’t have any blindfolds available.

Line the chairs up in a row, side by side. Ask for the pairs who would like to play a game to step forward. Have all of the men put on a blind fold and put their backs to the chairs. Have all of the women to quietly pick a chair and take a seat.  Have the men turn around and one by one allow them to approach the women. They must feel the ladies knees, and knees only, to try and identify their partner or spouse.

Once they believe they have found them, they will step away from the women. Go down the line asking the men whose knees they believe belong to their partner or spouse. Take off the blindfolds and have them turn around and see if they are correct. Those who were correct win a small prize. Now you can have the women switch places and try to identify their men by their knees. Same rules apply.

This game requires only a keen sense of observation for the player. It requires everyday objects (like a seasoning packet, a small toy, a bow, and a key chain), pens, and paper.

As your guests arrive you will assign them an object and write it down on the paper with their name next to it to keep as a reference for later. Then you will need to have papers with everyone’s names written on one side and a blank space next to each name for filling in at the end of the game. The object of the game is for them to keep the object visibly on them at all times.   It can be kept in their hand, hair, tucked behind the ear or wherever else as long as it remains visible throughout the evening.

When you are ready to call the game, collect all of the objects and display them on a tray or table. Then you will give everyone a pen and paper. They will write down the object and the person who held it for as many of the the objects as they can.  The player with the most correct wins!

Everyone will gather around with shots available. Jell-O shots work well with this game and allows for better tasting consequences. The game will start by someone naming an animal. The next person must name an animal that begins with the last letter of that animal’s name. For example, if someone says monkey, the next person must pick an animal that starts with ‘y’ like Yak. If someone cannot think of an animal within 5 to 10 seconds that hasn't already been named they must take a shot and pick a new animal to begin the game with.

You will need from 12-18 shot glasses, a beer or champagne bottle and the drink of your choice. The game is even better if you use several types of alcohol.

This game is pretty simple but will take your guests by surprise. Throughout your party you will randomly call out a question to the crowd. Questions like “Who here is the oldest in the room, who has four children, who played soccer in college?” The first person to shout out the correct answer gets to choose who in the room will have to take a shot. This continues for as long as you like or when few are left standing.