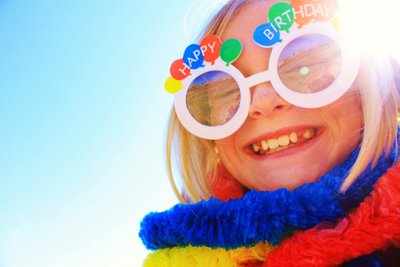 The following set of fun birthday party games are all traditional children’s party games. They are the classics, you will probably recognize most if not all of these games as favorites from your own childhood. These traditional games are classic for a reason, they are timeless, fun, and children still enjoy playing them generation after generation. We have party games for tons of kids themes, these are the old school classics that never quite go out of style.

Another great thing about most of these party games is that they can be easily altered to fit your party theme or style. For example: Hot Potato can easily be turned into the perfect game for a little girls princess party by switching the “potato” to an apple and renaming the game “pass the poison apple. I list other fun alterations and twist on the classics below.

This is a fun children’s party game that can be played indoors or outdoors. Choose an object to represent the bone. This can be any small object such as a deck of cards to a stuffed animal. One child is the “doggie”. All the children sit down in a group. The child designated the doggie will sit in front of the group with his or her back facing toward them.

"Doggie, Doggie, where’s your bone? Someone stole it from your home!"

At that point the doggie opens their eyes and turns around and tries to guess who has the bone. Afterward another child takes their turn as the doggie and the game is repeated. 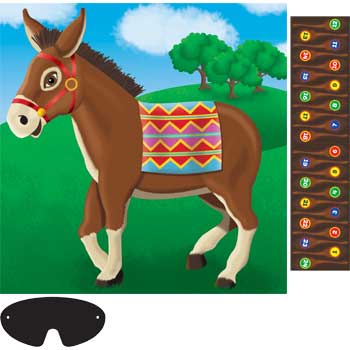 A classic party favorite, this pin the tail on the donkey game will bring back fond memories of your own birthday parties! A poster of a donkey missing his tail is hung up on the wall at eye level with the children. Each child is given a tail sticker and blindfolded. The are spun around three times and pointed in the direction of the donkey.

Their goal is to be the one that gets their tail stuck closest to where the actual donkeys tail should be. You can create your own pin the tail on the donkey game if you are the creative sort, or you can purchase one.

In this classic chase game all the children sit in a circle. One child (the caller) goes around the circle tapping each child on the head and says “duck” until he chooses one child and calls out “Goose!”. The sitting child must then get up and try to tag the caller before he races around the circle and returns to steal the gooses place in the circle. If the goose tags the caller then the caller must sit in the middle of the circle until another caller is tagged to take his or her place. The goose becomes the next caller.

You can easily change “Duck Duck Goose” to another name to fit your theme party. If you are having a lego themed party then you could play this as “Block Block Lego”. A garden themed party, how about “Flower Flower Rose”.

For this classic children’s party game the children sit in a circle and pass around a potato as fast as they can while the music is playing. The idea is to pretend the potato is hot and to get it out of your hands and into the next child’s hands as fast as you can. When the music stops whoever is caught holding the potato is out and must sit out or sit in the middle of the circle. Continue playing until only one child is left and declare them the winner.

This game can be varied in many ways. As I mentioned above it can be turned into “pass the poison apple” for a Disney princess party. I played that version at my daughters 5th birthday and it was a big hit. If they were the child caught with the “poison apple”, I had each child pretend to take a bite and fall into a deep sleep. It was so much fun to watch how each girl dramatically fell under the spell. When they felt a tap on their shoulder from the magic wand they were allowed to awaken from the spell and collect a small prize. This way no child felt bad about being “out”.

This is another game that can be played indoors. You’ll need a grand prize or enough small prizes for each player. Place them in a box and wrap the box in layers of different wrapping paper or tissue paper. Have the children sit in a circle and pass the wrapped box around while the music is playing. When the music stops whoever is left holding the box must remove a layer of paper. Continue until one person finally removes the last layer and reveals the grand prize.

A fun twist in this game is to hide stuff between each layer such as a joke, tongue twister or a fun challenge. The child that removes the layer must say the tongue twister, tell the joke, or perform the challenge. This adds a fun and funny addition to the pass the parcel party game that really livens it up.

Charades is a classic that is still played by both young and old. The rules are simple and the fun is enormous. The basics are one person acts out a clue, usually a person or object. Everyone else tries to guess what the clue is within two minutes. The person acting cannot talk. You can play charades in teams or as one big group. If you play as one big group, which is best with younger children, whoever guesses gets to be the next actor. Or, to make sure everyone gets a turn who wants one draw names out of a hat.

You’ll need about 10 pennies to play this game. You’ll also need a can, bowl, or bucket. Have each child stand back a couple of feet from the can. The older the child the farther back they should stand. Each child takes a turn and tries to get as many of their pennies into the can by tossing them one at a time. You can reward prizes for getting a certain amount in the can, or for getting the most, or you can just play for fun. Sound simple? It is, but it is a timeless favorite.

One person is Simon and they stand in front of the group. Everyone else is standing also facing Simon. Simon issues simple orders such as “touch your head” “spin in a circle” “stand on one foot”, etc. The children only follows the command if Simon preferences the order with “Simon says”. If a child follows a command where Simon did not begin it with “Simon says” then they must sit out to the next round. The winner is the last person standing, they get to be the next Simon.

Red Rover Red Rover is another game that should be played outdoors. How to Play: The children divide into equal teams and stand on opposite sides of the backyard or playing area. Each team member stands side to side with their other team mates and clasp hands. Then one team starts by calling out choosing someone from the other team, say Sarah, and yells:

At this point whatever Sarah breaks from her team and runs as fast as she can between any two peoples clasped hands on the other team. If she breaks through them then she gets to choose any of their players to take back to her team. If she doesn’t break through the arms, then she now belongs to their team and must join their chain of hands.

Now it’s the next teams turn to call someone over. This continues until everyone is on the same team.

Hide and go seek is one of the most widely known and popular children’s game around. A tree or other area is designated as base, and then one person is chosen to be it. They must close their eyes and count, usually to 50. Everyone else must find a place to hide.

After the person who is “it” is finished counting they may start looking for the others. If “it” spots a person they must try and tag them before that person can tag base. The first person who is found and tagged by “it” becomes the next “it” and the game starts again.

In this classic birthday party game you will need to set up a circle of chairs. You should have enough chairs for every player minus one. The children walk around the chairs while the music is playing. When the music stops everyone must scramble to find a chair. The person who doesn’t find a chair is out. Then remove one of the chairs and start the music again. The winner is the person that snags the last chair.

Piñata’s are a very popular item to have a birthday parties. They are figures made out of cardboard and tissue paper that are usually stuffed with candy or small prizes.

There are two main type of piñata’s. The traditional piñata is hung from the ceiling or strung from a tree and the children are then blindfolded and given a stick or bat. They are turned around three times and then pointed in the direction of the piñata. They are given three chances to hit the piñata as hard as they can. After that it is the next child’s turn. Eventually the piñata will be busted open and all the children will race to collect the goodies that have spilled out of it.

The other kind of piñata is called a pull string piñata. It is very similar to the traditional piñata except that you do not bust it open using a bat. You still hang it from a tree, but on the bottom of this piñata are lots of hanging ribbons. One, and only one, of the ribbons will pull open a trap door on the piñata and release all the goodies inside. The children take turns pulling the strings until one release’s the candy.

The great thing about piñata’s is that you can get them is just about any shape now. From your child’s favorite characters such as Mickey Mouse, Dora the Explorer, race cars, or castles. Whatever your party theme is about you can almost be sure that you can find a piñata that will compliment it.