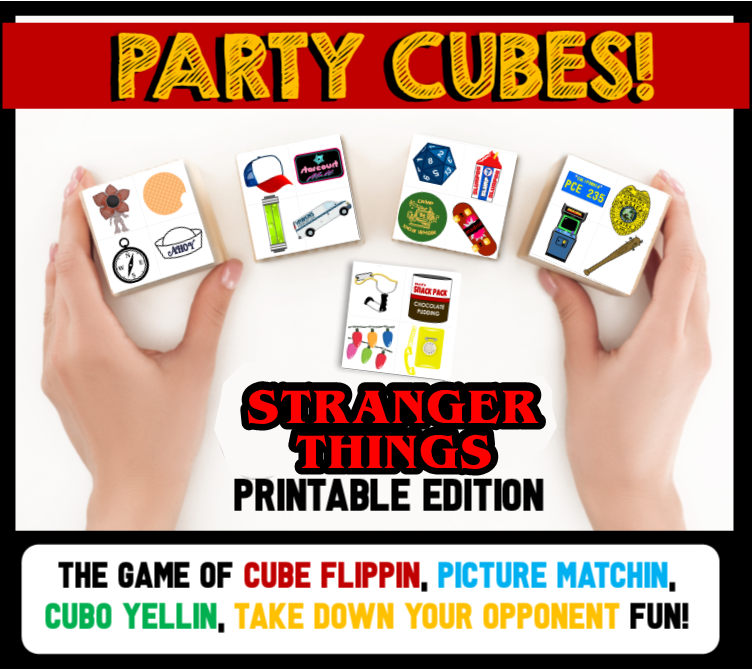 Party Cubes is an original game creation so you will not find it anywhere else.  This is the Stranger Things Game Edition, but many versions are coming!

Party Cubes are printable cubes (you print and fold) that feature four different images on each side.  The Stranger Things version feature Stranger Things icons from seasons 1,2, and 3 such as a Eggo, Ahoy hat, Slurpee cup, Christmas lights, yellow phone etc..  Each side of the cube measures 2.25 inches so they are pretty big and pretty fun.

There are two different ways to play Party Cubes.  The first involves speed, the second (CUBO version) involves luck and a bit of strategy. You choose which works best for you and your crowd.

Players face off one on one. Each player gets a set of five party cubes.  A  game card is flipped so that both players see it at the same time.  The first player to flip all their party cubes where the image on the game card is facing up on each of the cubes wins.  The player that wins best out of three rounds stays and another player comes to challenge the winner.  Continue until all players have a chance to play, you may even want to do it tournament style.

#2 : CUBO!
Like Bingo, But much more interesting
and better in every way

2-6 PLAYER VERSION: Each player gets a CUBO card.  Players take turns rolling all five party cubes.  I suggest using a hat or something similar to roll them with as they are too big to comfortable roll them all with hands.  Players get 3 rolls just like in Yahtzee.  If at the end of three rolls a player has FOUR of one image showing (on the top of the cube) they can cover up that image on their Cubo card.   If they have all FIVE images rolled they can cover up that image AND roll the Cube of Fortune!  The Cube of Fortune is an additional cube that has different commands that mix up the game and keep players on their toes. These might include:

When a player get five images covered in a row (either vertically, horizontally, or diagonally) they call out CUBO!  If at the end of the round nobody else has called out CUBO they win, if their is a CUBO tie they play a quick Flip & Spot Speed Game (#1 above) to break it.

7 OR MORE PLAYERS:  Each player gets a Cubo card (print out as many cards as you have players, some players will have matching cards, this doesn't effect game play)  Each player is given two cubes.  The caller calls out a calling card and each player rolls their two cubes ONCE.  If they roll the called image on either of their cubes they get to cover it up on their card.  If they roll the image with both cubes then they must roll the Cube of Fortune and follow the special command.  Just like in the 2-6 player version when a player gets a row of five images covered they call out CUBO! If by the end of that round they are the only one who called it they win! IF another player(s) also made Cubo in that round they have to battle by playing the Flip & Spot Speed Game (#1 above).

how to set up your
party cubes stranger things game edition: 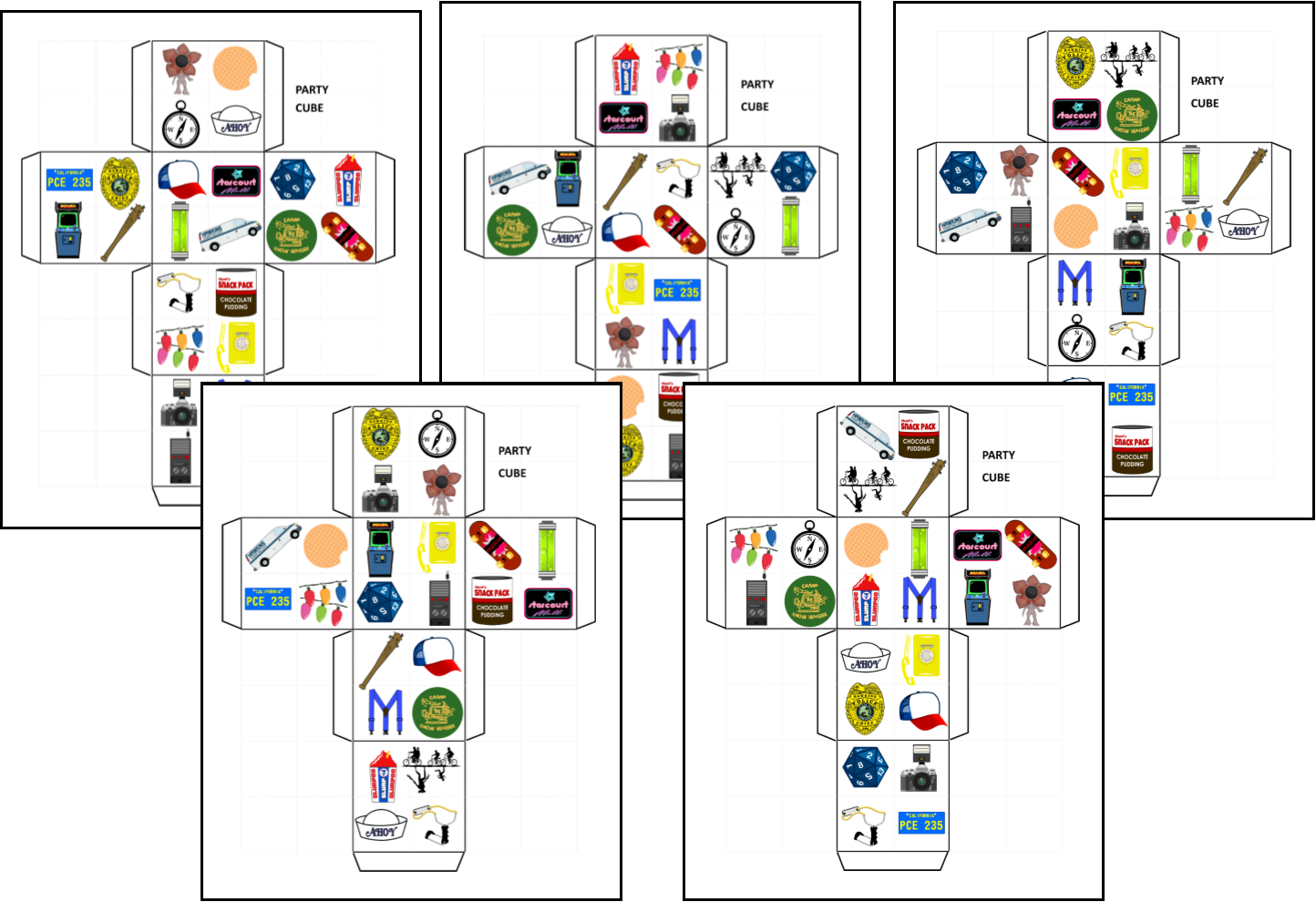 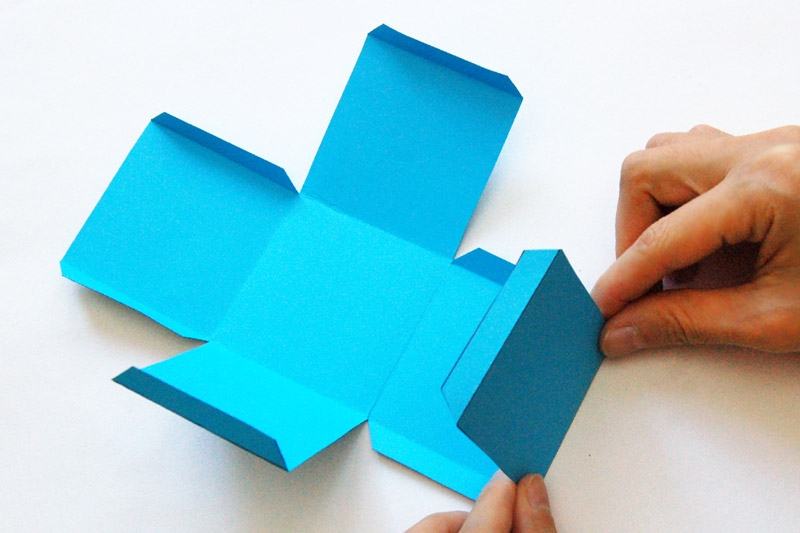 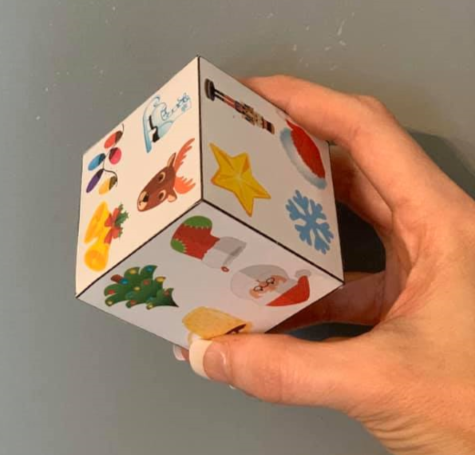 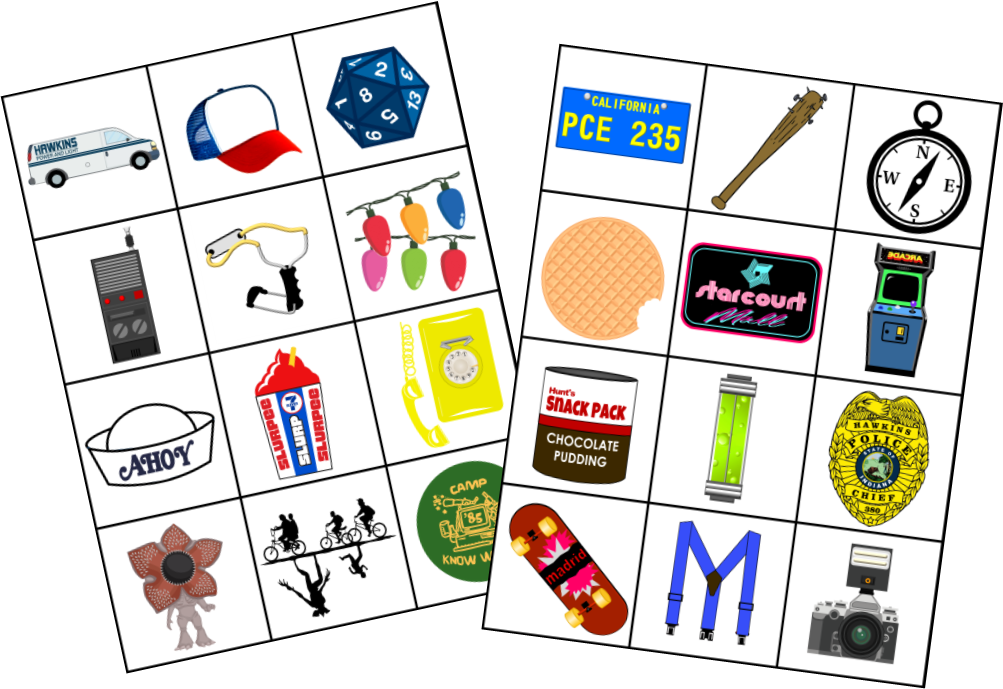 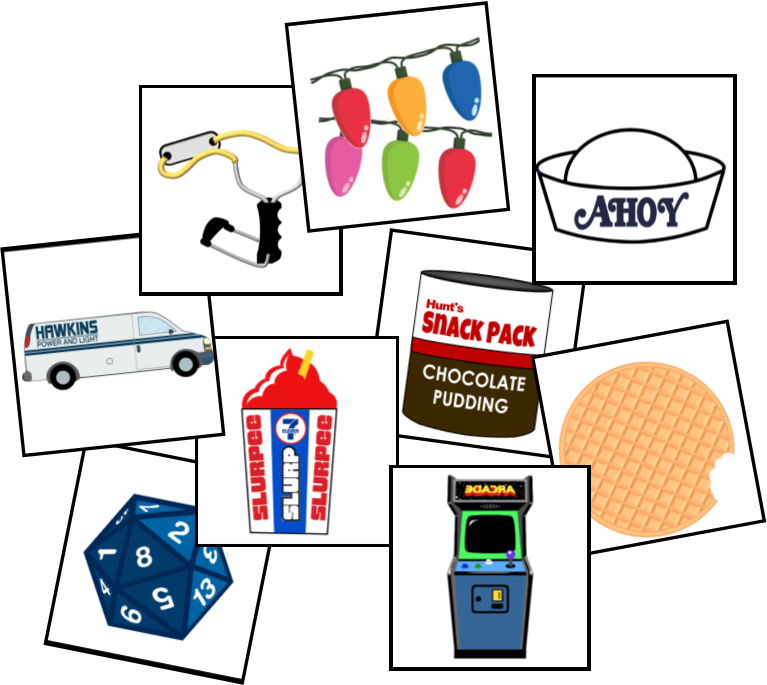 5. Print out Cubo Cards.  Note if you are playing with more that 6 players simply print more cards.  It does not matter if players have identical cards, technically you could just use one version of the card for everyone. 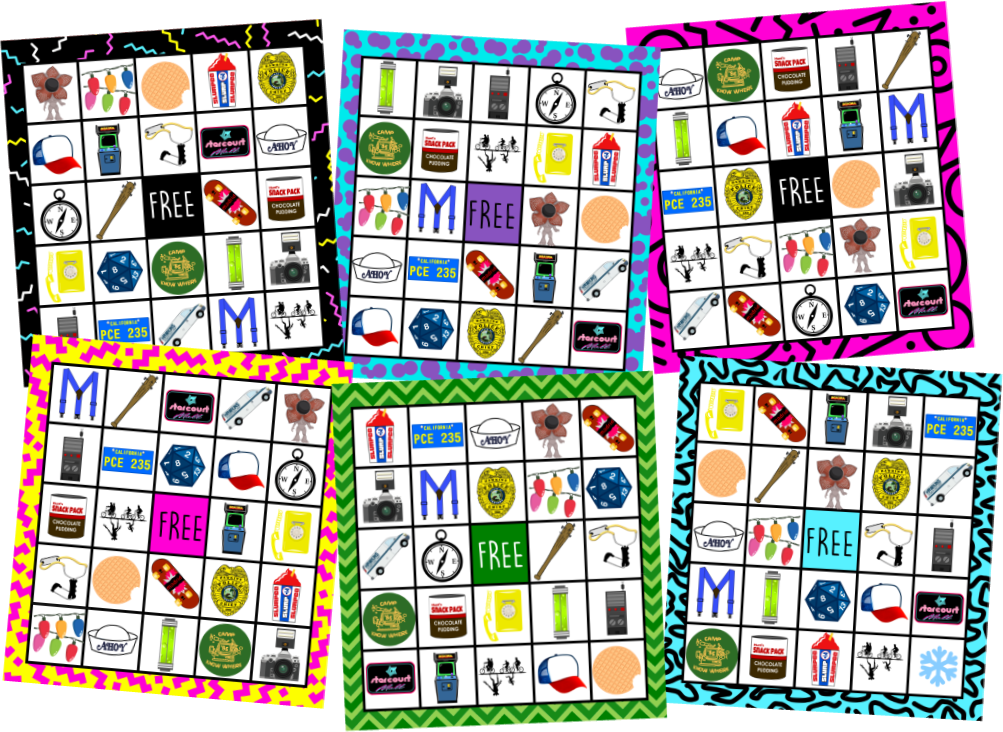 6. Print out Cube of Fortune and fold and secure it as you did the Party Cubes. 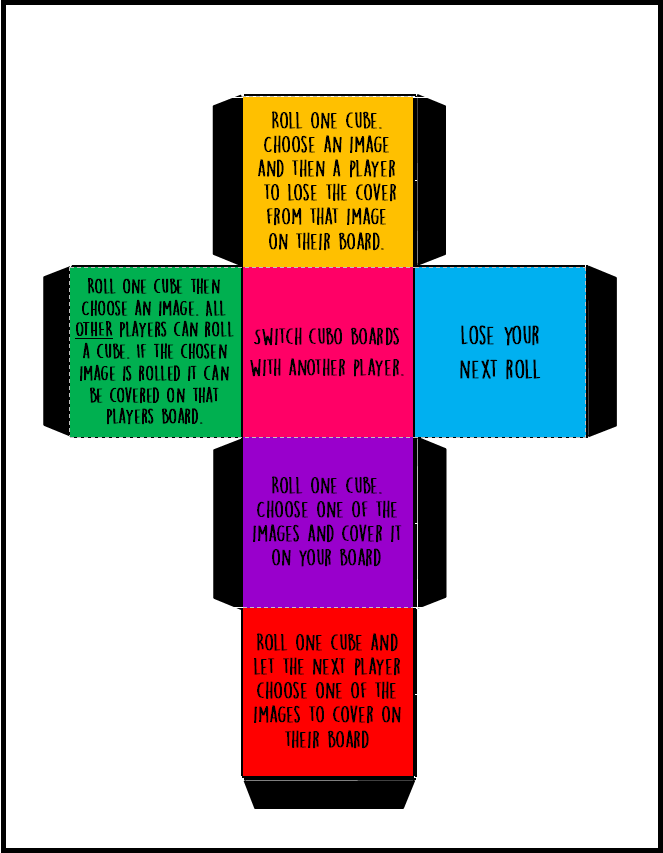 7.  You are now ready to play!  If you have any questions email me at HappyPartying@gmail.com.  Enjoy!

Your Party Cubes Christmas Game Edition will arrive to your email moments after you order.  It comes in a ready-to-print PDF file with all of the following:

If you have any questions just email me at HappyPartying@gmail.com 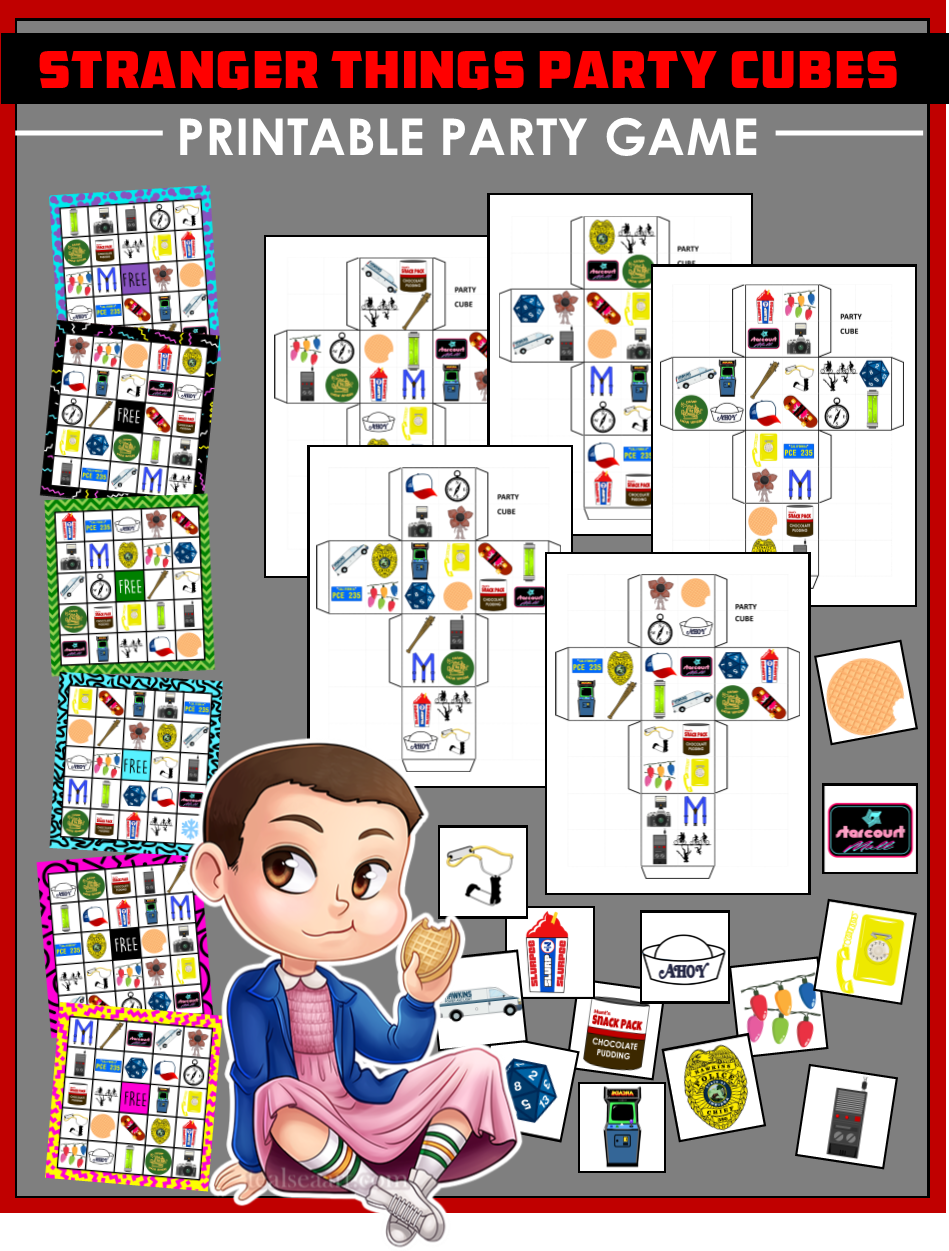